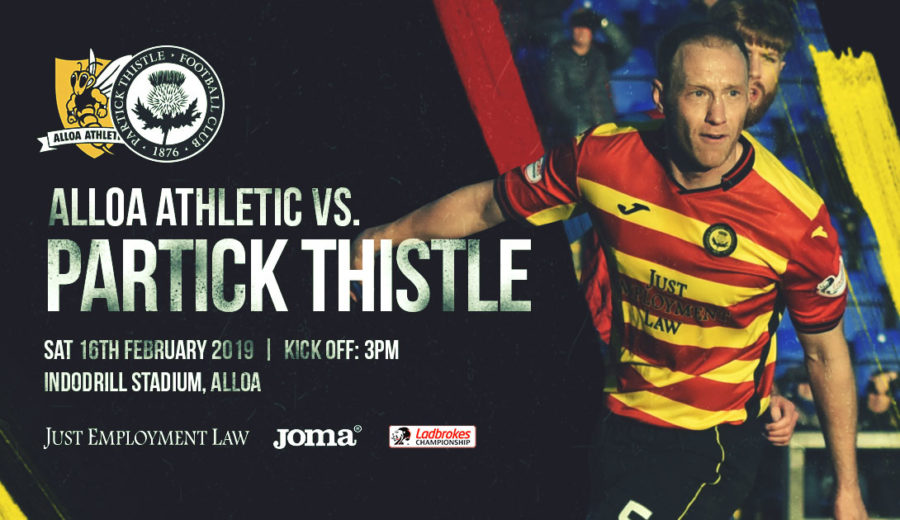 Steven Anderson is looking forward to another massive game as Thistle travel to take on Alloa Athletic in the latest in a series of big games for the Jags.

The defender has made a great start to life at Thistle after arriving on loan from St Johnstone and he wants to keep that going on Saturday.

Speaking to ptfc.co.uk he said: ”It’s a big game and one which we are obviously looking forward to. We’ll go there and hopefully we can get the result and pick up the three points we want.

“We know what a win can do in terms of the table, we know what it means. That makes it a must win game. Not only in terms of that but it would continue the momentum going into the games coming up after that too.”

Thistle are on a run of four wins in a row and six games undefeated and Ando feels that makes a big difference as the players go in search of another win.

“Winning games brings confidence. Confidence brings a lot of things, players go out and feel they can do what they need to do on the pitch, no one hides and you can see that in the last couple of games how much of a difference it makes.

The defender knows it’s going to be a tough test but is hoping to build on the clean sheet last week with another at the Indodrill Stadium.

“All games in this league are a tough test, Alloa have done well this season, I’ve not played there for a while but everyone goes on about their tight pitch. So we have to go and make sure we play our game and everybody does their job to bring back the three points.

“As a defender clean sheets are the most important thing. You can build on a clean sheet. You aren’t going to lose if you keep a clean sheet so it’s the first step to winning the game. The more clean sheets the better.

“It’s not just about the defenders, the whole team play their part. The boys further up press and the midfielders help the defenders and it’s all about the team and we are working really hard as a team to make that happen.”

Anderson was a January signing from St Johnstone and he admits life away from Perth for the first time is different but he is enjoying life in Red and Yellow.

“I’m loving life at Thistle. It’s great to be back playing football and playing regularly. That is important at my age and it’s been a great start to life here. I want to just keep playing and do well for the team as much as I can.

“It’s obviously a big change for me, I had only been at St Johnstone as a first team player before so it’s a new dressing room and a fresh start. It’s been great so far and I’ve settled in really well.”

The Jags number five has goals in each of his two games so far and while he would like to make it three from three, winning matches is his most important focus.

“It’s great to get two goals on the bounce and for them to mean something too. Hopefully I can make it three on Saturday but it’s all about winning games first and foremost. It’s about picking up as many points as possible and if I can grab a goal it’s just a bonus.”

Can’t make it to the Indodrill Stadium? Jagzone members can listen to live audio commentary of the match. JagZoneLIVE begins at 2:45pm on Saturday.