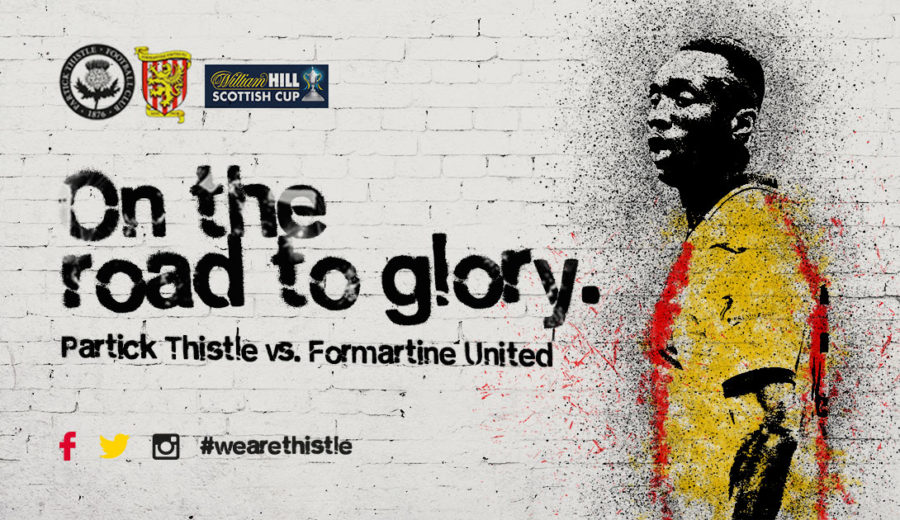 Ade Azeez walked out at Wembley last May for the League Two play off final, an experience the Jags frontman still holds on to. Now Ade is hoping for a Hampden date this May as he looks to help guide Thistle to Scottish Cup glory.

Speaking exclusively to ptfc.co.uk, Ade said: “It’s amazing, it’s such a surreal day. You can’t hear yourself think, you walk out there and it’s an amazing feeling, it’s one you remember and one you want to have again and again. It’s the ultimate aim to get Thistle to a cup final and we go out tomorrow at the start of that journey so hopefully we can have that feeling and the boys who haven’t experienced something like that can do so this season.

“It’s great for the fans, we want to give them something to be excited about and build a buzz about the place. That can only be good for the league campaign too and we want to build a winning run again to help continue where we left off before the break.”

After a winter break that saw Thistle jet off to spend a week in La Manga for some warm weather training, Formartine United are the visitors to Firhill in the fourth round of the William Hill Scottish Cup and Azeez is looking forward to returning to competitive football.

“We can’t wait to get back out there after the break. We are looking forward to getting on the pitch and playing some football.

“We’ve had a good break, we are rested and raring to go. We had the friendly in La Manga which blew the cobwebs off a bit but it’s all about the competitive action and we look forward to it.”

Despite the itch to get back on the pitch Ade admits the break was good for the players as they go into the homeward stretch of the league season.

“The break was good to recharge. We’ve played a lot of football and you start to feel a bit sore. The break allowed us to rest and recover before we were pushed hard in La Manga. We worked hard and I think that will show on Saturday and for the run in to the season.

“It was great to get away with the boys. We were living six to an apartment so we spend a lot of time together. You are with each other 24/7, eating and sleeping together so it helped us all bond even more and that can only be good for team spirit and understanding.”

While Scotland battled the snow the players soaked up the sun in La Manga and took full advantage of state of the art facilities.

“The facilities over there are fantastic, it had everything we needed, the pitches were great, we had the pool and it really allowed us to put the work in and train hard.”

Despite a defeat against Lokeren, the Thistle number 16 was pleased to bag the opening goal and he hopes he can now build on that.

“It was great getting the goal over there, I know it was only a friendly but it gives me something to build on and any goal gives you confidence. I’m now confident I can add to that before the end of the season and help the team as much as I can.”

Formartine are a team most will expect Thistle to defeat but Azeez knows they can’t take them lightly.

“It’s a good game to come back to. We know we have to do things right and we know we can’t take them lightly. They have come this far and have some good players so we have to be at our best. We know they will be right up for it and we have to make sure we are too. Everyone expects us to win so we need to make sure we do what is expected of us and keep the cup journey going.”