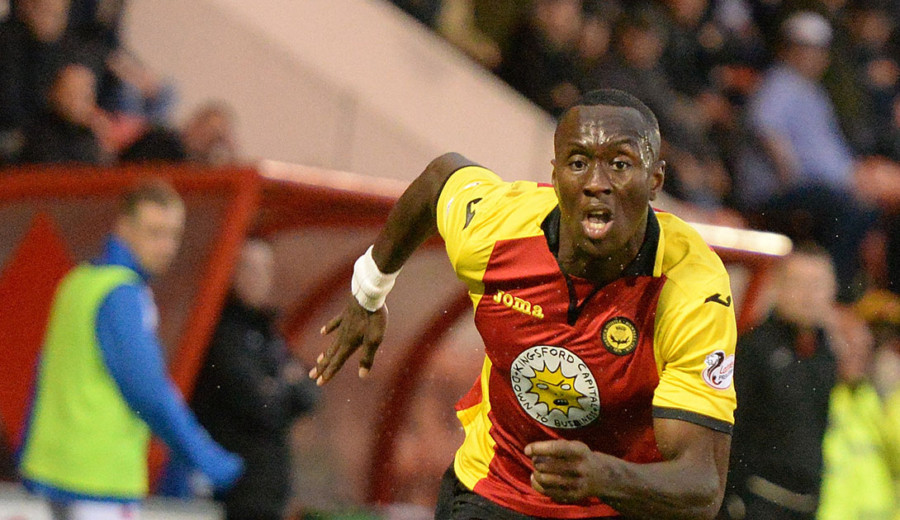 Azeez: Great to make debut and goals will come

Thistle’s summer signing, Ade Azeez, made his competitive debut in red and yellow on Friday night in the Betfred Cup opener against Airdrieonians. Ade came on for Declan McDaid midway through the second half and although the former AFC Wimbledon man failed to get on the scoresheet he terrorised the Diamonds defence and, but for the sprawling legs of keeper, Rohan Ferguson, he might very well have opened his account.

The Jags new boy took the time to talk to ptfc.co.uk shortly after full time to give his thoughts on the game, pre-season and the prospect of a Partick Thistle cup run.

We’ve had a few games now and I’ve been able to gradually get my fitness up which has been great. I felt strong and confident when I came on tonight and it felt good to help the boys on to a victory. I feel like I have trained well through our pre-season and I’ve just been desperate for the competitive games to start if I’m honest.

“There’s a lot of competition between strikers at this club but we all want each other to do well for the club. At the end of the day, if we all do well then the club does well and everyone wins. The great thing about the mix of strikers we have here is that we all bring something totally different. I like to play off the shoulder and use my body to get chances and that was what I did tonight.”

Ade has brought a fantastic attitude to the club from day one and certainly hasn’t had any problems settling into the dressing room.

“I don’t feel like a new player at all. I honestly feel like I’ve known these boys for a long time and the club really feels like a family – I feel so welcome.

“I maybe should have got off the mark tonight but the keeper has done well to be fair. You always want to get off the mark for your new club as early as possible but hopefully I’ll do that in these cup games. Scoring is the best way to boost confidence so I hope that I can get off the mark soon and keep the goals coming as we start the league campaign.

“Pre-season is pre-season but there is nothing like a competitive game and it has been great to get back to that after what seems like a long break. I’m in the mind-set now where I just can’t wait to get on to the next match.”

As all Jags fans are painfully aware, it has been a long time since Thistle had a decent cup run, something Ade is certain the club can put behind them.

“I know the club has not had a good cup run in a while but I hope that, with a bit of luck, we can put an end to that this year. I was obviously lucky enough to get to the playoff final last season and win it so I will certainly be looking to use the experience I gained there to help us get a run going this season.”