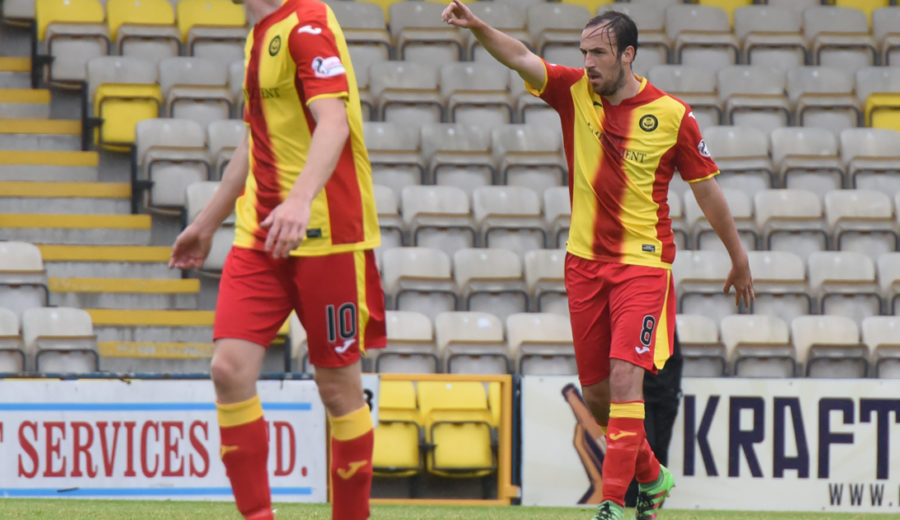 After a 15 month rehabilitation process Stuart Bannigan made his long awaited return to competitive action as he started in Partick Thistle’s 1-1 draw with Livingston at the Tony Macaroni Arena. After a long spell on the side-lines, the Thistle fans would have been delighted to see the midfielder back on the pitch and in a Jags jersey. Unfortunately, Thistle were unable to pick up the win against Livi and eventually lost out on a bonus point having failed to win the penalty shootout after the draw. Stuart gave his thoughts to ptfc.co.uk following the game.

Bannigan was happy with the way the side started the first half, creating a couple of decent chances as well as opening the scoring in the 15th minute.

“I thought that we started the game as well as we wanted to. We had a few chances to break away, with 2-on-1s and 3-on-2s and I feel that if we’d picked a better pass in the final third then we might have been two or three up by the 20 minute mark. They came into the game eventually. They’re a good team physically and gave us problems too, dominating us in that sense which we’re disappointed about.”

The former Scotland under-21 international believes that the timing of Livingston’s equaliser was key to the game.

“Of course, conceding so quickly after half-time wasn’t ideal either and that gave them a little moral boost that they needed to take the game to us. From there on, they had more of the ball and we looked a bit shaky and nervous. All in all, a draw was probably fair as both teams created good chances throughout the game but based on the second half, Livi might have felt they deserved the win.”

Stuart understands the size of the task at hand now if the Jags are to get out of their group with three tough fixtures still to come.

“After today, we probably need to win all our games to have a chance. We’ve made it difficult for ourselves but the boys are determined to improve and we still want to go as far as possible in this competition.”

Although the squad is determined to improve on today’s result ahead of next week’s fixture, Bannigan knows that the team from today isn’t going to be the team that start the league season with injured players and new signings still to come.

“There’s a lot of time left until the league and today’s our first competitive game so you expect there to be a bit of rustiness but we have to get rid of that very quickly as we don’t want to end up out of the cup by the time the league rolls around because that would be no good for morale. I think we showed glimpses of what we can do today but certainly there’s a lot of improvements to be made. Although we should have had enough to get the job done anyway, it would have helped to have had some more options off the bench because to ask any of the young lads to come on and change the game is unfair.”

Personally, Stuart is feeling good after playing his first competitive 90 minutes in over a year.

“That was my first full game back. In pre-season, I was playing an hour at most generally but the step up felt fine today. I was putting in tackles like I did before my injury and the hunger is definitely still there so I’m happy on a personal level to get the minutes and I didn’t feel out of place. These injuries are serious so I do have to look after myself for now and continue to just ease back to normality in a sense.”

Stuart Bannigan can now look forward to next Saturday’s game against St. Mirren at Firhill as he looks to make his first Firhill appearance since Thistle’s 2-0 win over St. Johnstone in February 2016. Kick-off is at 15:00.

More reaction from Kevin Nisbet and James Penrice as well as Jags gaffer Alan Archibald is available now to Jagzone subscribers. Log in now to see it.

Highlights of the game are now available for Jagzone subscribers.

Stuart has committed, will you join him? 2017/18 season tickets are now on sale.