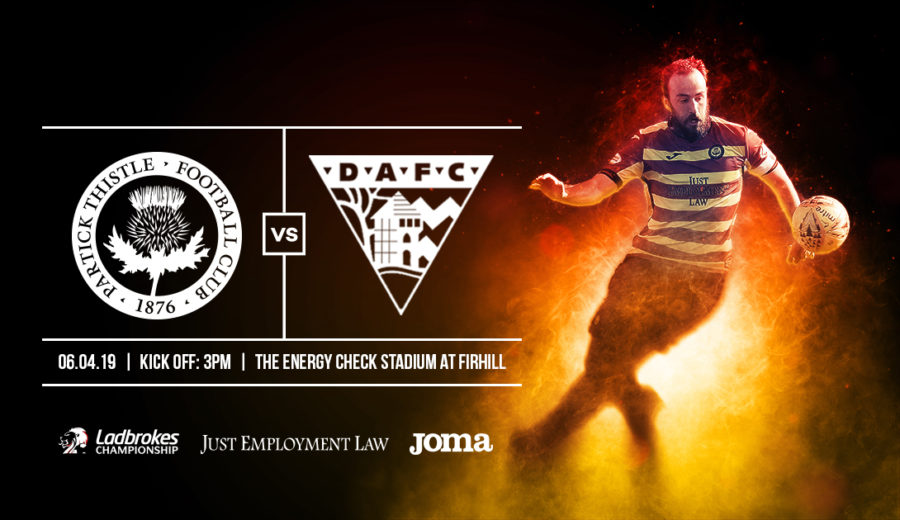 Bannigan knows what is at stake

Stuart Bannigan is looking forward to returning to the Energy Check Stadium at Firhill tomorrow afternoon to take on Dunfermline Athletic.

With just six games to go until the end of the campaign, and the bottom half of the division separated by just a handful of points, the Jags skipper knows that every match is going to be vital throughout the run in. Speaking to ptfc.co.uk he said:

“We know what is at stake on Saturday especially with all the teams about us playing each other. We know there will be at least a couple of teams dropping points so we need to take advantage of that and get the win.

“You can see from the results over the last few weeks that it’s a really competitive division. Not many people would have thought Alloa would beat Ross County or that Queen of the South would go to Tannadice and win, but they did. Everyone in this league has a lot of play for and there are five teams battling to stay in the league. There are not going to be very many games where you can predict the result towards the end of the season. We need to bring our “A” game to every match, starting on Saturday against Dunfermline.”

Thistle put in a poor performance at East End Park when the sides last met five weeks ago, and the Jags number eight, who missed that fixture, is keen to right that wrong.

“We were pretty poor that night and didn’t really get going. The game before that at Firhill we beat them so it has been even stevens between us this season with the home team winning. We know they are a decent side; they’ve put on a really good run during the last couple of months and are in a great position to have a charge at the promotion playoffs. They still have all to play for as well so it’s going to be a really competitive game but we need to show we’ve got a lot more at stake than they do.”

Thistle head into the game against the Pars on the back of a win against Greenock Morton and Banzo was pleased to get three points on the road to end March.

“It was a great feeling to have a comprehensive victory away from home so we need to try and continue that form. I felt that we could’ve moved the ball a wee bit better, especially in the first half, but we were ruthless which is something we haven’t really been this season. We had our chances, took them and got three goals in front, which isn’t something we’ve been doing much of. Towards the end of the season we have six really tough matches coming up and we know when our chances come, we will need to take them.”

Shea Gordon returned to the starting line up last weekend after a long time on the sidelines with injury and Stuart was pleased to see the Northern Irishman return to full fitness.

“I’m delighted for Shea. He’s had a bit of trouble trying to get back, he’s been in training a few times then had to stop and go back into his rehab again. I know how difficult and frustrating that can be so I was always keeping in touch with him when he was over at Motherwell doing most of his rehab. I was always texting him and making sure his head was okay and that he was feeling alright.

“He had a really good game at Cappielow considering it was his first game back and I enjoy playing with him. He brings a lot of energy to the side, he brings forward runs and is just a really, really good player to play with so I’m delighted for him. I’m sure it will be the first of many appearances to come towards the end of the season as he’s really staked a claim for that midfield spot.”

In our last home game Bannigan netted his first Jags goal in over three years, earning a nomination for the SPFL Goal of the Month, and the energetic midfielder is looking to get on the scoresheet again before the campaign is over.

“I’d love to find the back the net again, I was hoping to get two goals in two games down at Morton but it didn’t quite arrive. I thought the goal I scored was an alright goal, I wouldn’t say it was a great goal so I was surprised to see it had been nominated for Goal of the Month. It’s good to be nominated for it, but I doubt it will win it. Hopefully I can get on the scoresheet again before the end of the season because it’s such a nice feeling but you know me, I’d rather take a win and let someone else score any day of the week.”