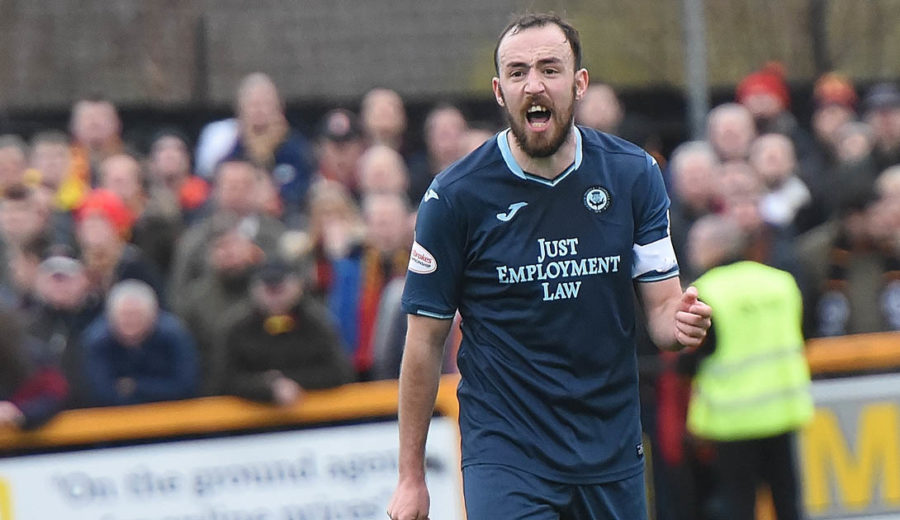 In crunch games, a captain’s influence can prove to be invaluable when looking to secure three points; that was certainly the case on Saturday as Partick Thistle went to the Indodrill Stadium and beat Alloa 2-0. Jags skipper, Stuart Bannigan, was on top form at the weekend, leading by example with his energy and drive at the very centre of Thistle’s play.

After the final whistle, with the game won, Stuart chatted to ptfc.co.uk to reflect on a crucial Ladbrokes Championship triumph.

“It’s a massive win for us. It was well documented before the game that a win would take us up to eighth and it’s a great feeling to have achieved that. Every win feels great but to come away to a team who were above us and win; it feels even better.

“It wasn’t an easy game either. We had to work hard and they had a couple of good spells but the boys did well and I think in the end we were the better team on the day.”

For the seventh consecutive game, Thistle were the team to break the deadlock on Saturday with Blair Spittal firing the Jags ahead after four minutes and Bannigan believes that positive starts in games have been key to the recent red and yellow resurgence.

“It’s been a big thing for us because the first goal can be so vital in this league. It’s not just been the goals either; we’ve managed to put more pressure overall on our opponents in the early stages of games since the new year which can unsettle teams.

“As far as the Alloa game goes, it was the perfect start and it set the tone for the first half. Blair’s taken the chance well and it knocks Alloa’s confidence I think, especially given the run of form they’re on and that was the plan for us.”

The midfielder was quick to give plaudits to the defence who were pivotal in making it back-to-back Thistle clean sheets for the first time since October 2017.

“All of the boys who’ve come in have slotted in perfectly and you can see the difference they’ve made. Any ball that gets into the box is met by one of our guys and you can see them throwing their bodies on the line for the points. Ultimately, that’s what you want from your defenders and to get another clean sheet is a testament to their good work.”

Stuart also gave a mention to debutant, Scott McDonald, who bagged a goal in his first game as a Jag making it 2-0 after Lewis Mansell’s knockdown.

“He’s a player who’s had a great career and is still a terrific player. You could see his qualities on the pitch with his hold-up play and clever movement. It was his first 25 minutes or so with the boys but looking at the way he linked up with everyone, you’d have thought he’d been here for years.

“As a striker, I’m sure he would have been dying to get a goal especially after his time away from the game so to get a goal about 15 minutes into his debut will be great for him.”

Now the team look forward to returning home to the energy Check Stadium at Firhill for a meeting with league leaders Ross County, but although the Staggies sit in top spot, Bannigan believes the Jags have what it takes to get all three points.

“Look, they’re a great team who are in a very good position at the top of the league but we’re the Championship’s form team since the turn of the year and because of that, we can go into the match with confidence.

“It’s up to us to play at our best against County because when we’re firing on all cylinders, we can beat anyone in this league.”

A more in depth video interview with Brian Kerr is available now to Jagzone subscribers along with reaction from Conor Hazard and Blair Spittal – log in now to see them.