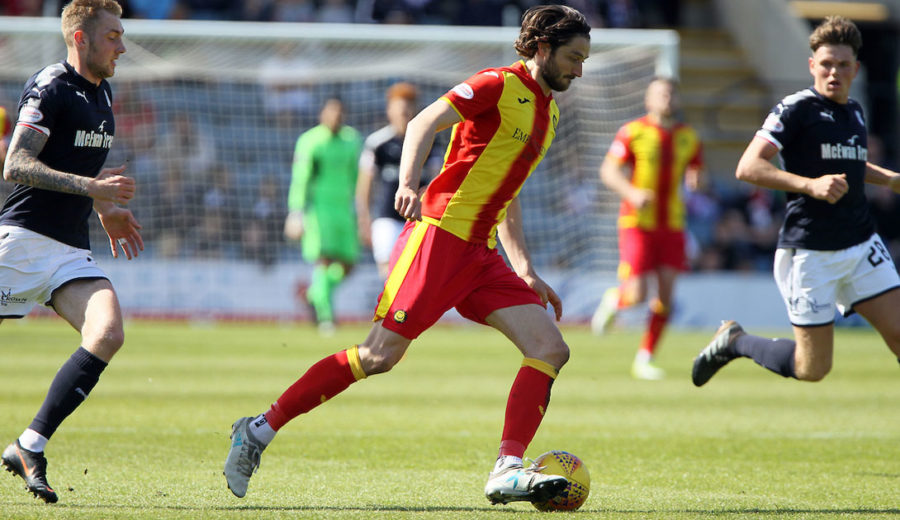 Barton: Everyone is pushing for the same goal

As Partick Thistle approached Saturday’s future-deciding clash with Dundee, the Jags knew that they would need some big performances if they were to take the three points from Dens Park. Despite a massive amount of pressure, the Maryhill men delivered with a number of players in red and yellow making key contributions to the survival cause as they won 1-0. One of those men who stepped up to the plate was Adam Barton, the ex-Portsmouth man was recalled to the Thistle starting line-up for last Tuesday’s match against Motherwell and then retained his place in the side for the weekend’s trip to Dundee. Barton performed excellently at Dens Park, displaying the best parts of his game and he played a prominent part in the Jags’ victory. Thistle’s number 13 spoke to ptfc.co.uk following the game to reflect on a tense 90 minutes.

Adam began by discussing nerves. On a day when the club’s top flight status was at stake, it would have been easy for the players to let the pressure affect their performance but Barton felt that the Jags dealt with the mental side of the game well and took care of business admirably.

“Pressure like that affects each player differently but I was just hoping that all the lads would be able to focus on the football when we got out onto that pitch and that’s exactly how it turned out. To be honest, I think that the pressure brought out the best in some of the guys. It gave them that extra edge. We showed plenty of fight and passion as a team and got what we deserved in the end.”

The Lancashire-born midfielder then mentioned that although the squad is relieved to have avoided the automatic drop, they know that the job is far from done.

“Everyone is pleased that we’ve won and secured 11th spot but we can’t really celebrate it as we’re not safe. Obviously, staying ahead of County was key but the play-offs provide tough competition for the second bottom side every year and I’m sure that it’ll be no different with Livingston. We showed the necessary qualities against Dundee; determination, fight and endeavour but we have to make sure we carry that into the two remaining games.”

He then spoke of the team’s frustration at half time as they discovered Ross County had taken the lead while they were still level despite a small selection of decent goal scoring opportunists.

“When we got into the dressing room at the break we found out that County were ahead, the disappointment of having not taken the lead was sort of enhanced I suppose. We felt that we had edged things for the first half and they had barely troubled our goal but it was still goalless. However, I think that when we got in at the interval there was a universal understanding of what needed to be done and that made the aim of the second half simple; get ahead and stay there.

“It is just the first step in the journey. We have an incredibly tough play-off against Livingston where we will have to be at our best and perform as we know we can to come out on top.”

The first leg of the play-off comes on this coming Thursday a Thistle travel east to take on Livi. Kick-off is 19:45 at the Tony Macaroni Arena.

More reaction from Kris Doolan and Steven Lawless as well as Jags gaffer Alan Archibald is available now to Jagzone subscribers. Log in now to see it.