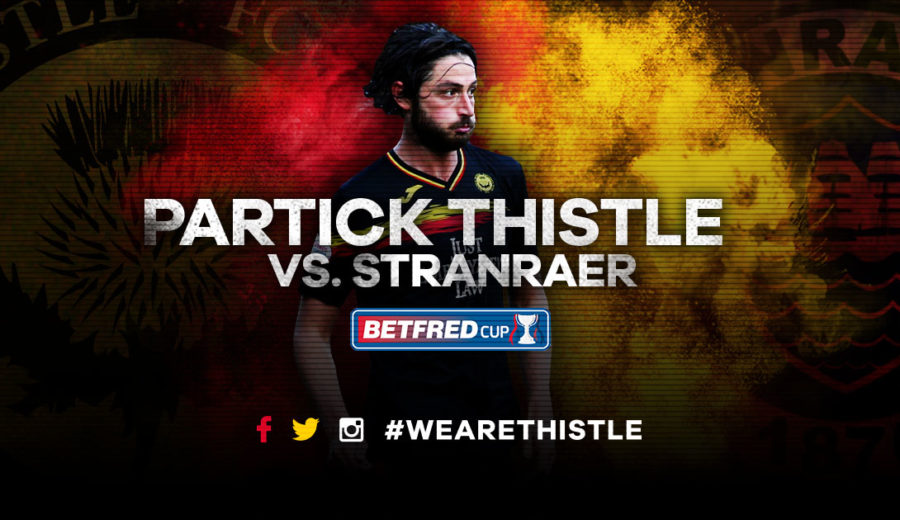 Adam Barton is hoping to help seal the teams place in the next round of the Betfred Cup with victory over Stranraer at Firhill.

Speaking to ptfc.co.uk Barton said: ” We are all feeling confident at the moment. We are unbeaten so far. Obviously the penalty shoot out in the first game, that was what it was, but over the ninety minutes we still haven’t been beaten.

“We go into a game at home knowing we need to win it to go through. After the result at home last weekend we are all really looking forward to it.”

Adam, however, is aware that they must be careful to avoid the banana skin in blue. Stranraer have yet to take a point in the group but he knows we can’t take them lightly

“These are the sort of games you can slip up in, we are expected to win and Stranraer would love to come and take something from the game. We have to try and be as professional as we can and put in a performance. We know it will be hard, like Tuesday was but if we go and do things correctly and aren’t sloppy then we should win the match.”

The game signals the end of the cup action and the last match before Ladbrokes Premiership action starts and the Thistle number thirteen is looking to build up more momentum ahead of the opener at Easter Road.

“It’s massive to keep up the momentum. The game on Tuesday was good so soon after the result and performance on Saturday. It was good to give us a bit of a bang, to show us we still had work to do and we had to really grind out the result.

“The match on Saturday is a really important game. Not only can we progress in the cup but it’s our last game before the league starts and momentum is massive. We want to get off to a good start and going into the league season on the back of three wins would help us.”

“We are back at Firhill with the good big grass pitch. It makes a massive difference to us. We put in a fantastic performance last weekend with some great free flowing football and the pitch played a massive part in that.

“Trying to do that on the plastic is much tougher, Tuesday was a bigger struggle. It’s tougher on your joints if you aren’t used to playing on them and it affects the football we play and I think everyone saw that on Tuesday night. I find them much tougher to play on.

“We are back at home on Saturday and I think it will be much easier for us to put on a better footballing performance.”

“It’s going to be difficult to improve last season both personally winning McCrea Financial Services player of the year and for the team finishing top six. However you can’t live off that, that’s the past now and got to look ahead.

“I want to play as many games as I can and whatever happens happens. I’ll be putting everything into it and trying to do the best that I can. I don’t really have any personal aims, I just go out and see what happens. To finish top six again would be great, we know it will be harder but that doesn’t mean we can’t and we have to go out and do the very best we can.”

On holiday and can’t make the game? Jagzone members can listen to live audio commentary of the Betfred Cup tie and will also be able to watch highlights of the game from midnight.

Adam has committed, will you join him? 2017/18 season tickets remain on sale.