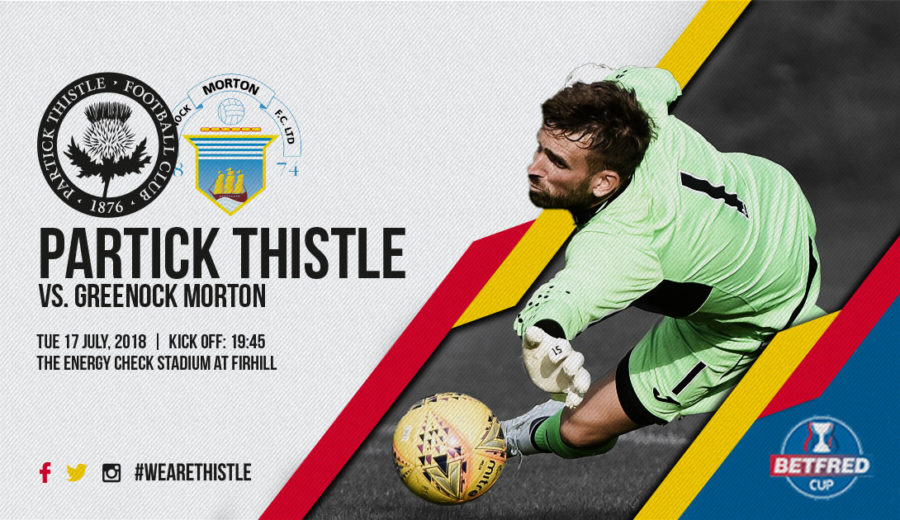 Cammy Bell has had to wait an extra couple of days to make his Thistle debut after missing out on the 2-0 victory over Stenhousemuir due to injury.

The Thistle number one is fit and raring to go as Morton come calling at The Energy Check Stadium at Firhill as the first visitors of the 2018/19 season.

Speaking to ptfc.co.uk he says he is looking forward to making his bow in front of the fans.

The goalkeeper is hoping to keep up the good start to the season after the comfortable victory over Stenhousemuir on Saturday, however he knows it will be a tougher test against a Morton side we will face in the Championship next season.

“We started the season well on Saturday, got the win and we now want to build on that against Morton. You always want to start the season with a win and get the confidence up early. We know it will be a tougher test, they are a full time team, a team in our division and it will be a harder game.

“It’s still early doors and sometimes these games are like friendlies sometimes but it’s a cup game so it’s important we go out and get the win and set our stall out early.”

Bell admits although the side want to get through in the Betfred cup and want a lengthy cup run these games are also useful as the team look to build ahead of the League season starting.

“We want to get through, we want to progress in the tournament but these games are important as you build towards the league games starting, that’s our main aim this season. We have two teams from our division in our group so it’s the chance to go up against them early and test ourselves, starting tomorrow night against Morton.

“We’ve got an entire new defence. I’m new here too so we’ve been working hard in training getting to know each other’s games, everyone’s strengths, how everyone plays and forming a strong defensive unit which will helps us do well for the coming season.”

Cammy has liked the look of his new defence so far and is looking forward to building a strong relationship as a back five.

“We’ve brought two new big strong defenders in during the summer, Tam has played in this league for a number of years and knows it very well, especially Morton who we are playing tomorrow. Christie has been here for a number of years so it’s good to have him in there too as we look to build that relationship and back 5.”

While the Jags number one missed out on Saturday he is raring and ready to go tonight, especially as he knows he has two keepers breathing down his neck.

“I’m feeling great and ready to go. I had a slight strain and Saturday it was mainly precautionary that I missed out because of the surface, if it has been grass I probably would have played but I’m ready to go tomorrow and looking forward it.

“Saturday showed we have two good keepers behind me looking for that place. Aaron done well in the first half but unfortunately picked up the knock and young Jamie came on and I thought he was fantastic. He looked really composed and make a great save. It’s good to have that competition, at every club you need that competition for places and I know I need to perform well to keep my place in the team. It’s up to me to do that now and that’s what I will aim to do.”

More exclusive preview interviews with Christie Elliott and Jags gaffer, Alan Archibald, are available to Jagzone subscribers –  log in now to see them.

Can’t make it to The Energy Check Stadium at Firhill? Jagzone members can listen to live audio commentary of the match. JagZoneLIVE begins at 7:30pm on Tuesday.