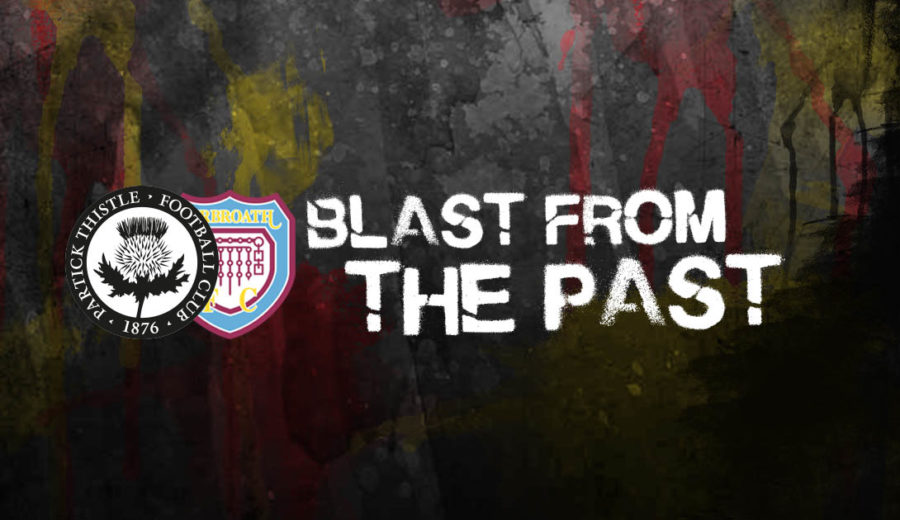 Blast from the past – Arbroath 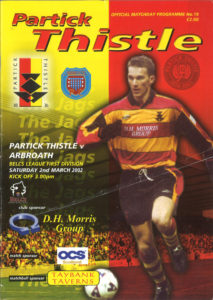 Arbroath’s most recent visit to Firhill was a very long time ago, when they gave a very plucky performance and briefly interrupted Thistle’s triumphant march towards the First Division title. Dropping two points was only a blip, a temporary set-back, but at half-time it looked as if we were heading for our first home league defeat of the season. The Red Lichties led 2-0. However, we came storming back and Scott McLean began the revival by netting on the hour mark and Martin Hardie equalised with nine minutes remaining. Of the eighteen home games we played in season 2001-02 we won 12 and drew 6 – a very impressive record. 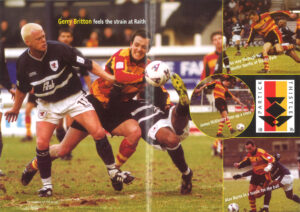 This is the full Thistle team who played out the match on a dry, bumpy and altogether difficult Firhill surface. This will do to explain a less than brilliant first-half performance, I guess. In goal was Kenny Arthur, and the full-backs were James McKinstry and Alan Archibald. Numbers four, five and six were Stephen Craigan, Scott Paterson and Alex Burns. The prolific Scott McLean, Danny Lennon, Martin Cameron, Martin Hardie and Andy Roddie made up the remainder of the line-up. Interesting names among the substitutes were Derek Fleming, Jamie Dolan, Paul Walker and Paddy Kelly. Don’t be confusing the last mentioned player with Pat Kelly, the dashing winger who played in the 1980s. 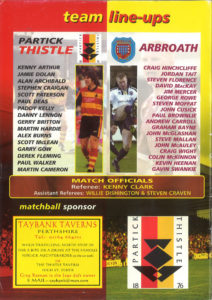 A familiar figure, was in goal for Arbroath – Craig Hinchcliffe, who played quite a number of games for Thistle. Strangely enough, we had played Arbroath at Gayfield just a few days earlier and had gone down 0-1, so it was pay-back time in a sense.

Promotion to the Premier League was safely secured a few weeks after the featured match, by which time we had a number of points to spare.

Finally, just to test the memory and keep the brains ticking over, can you identify the player whose picture is on the front cover of the programme?