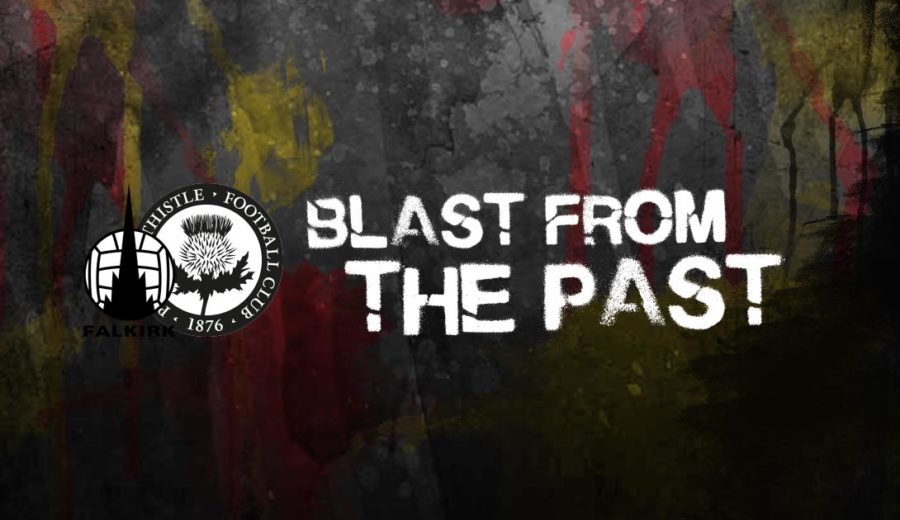 Blast from the past – Falkirk 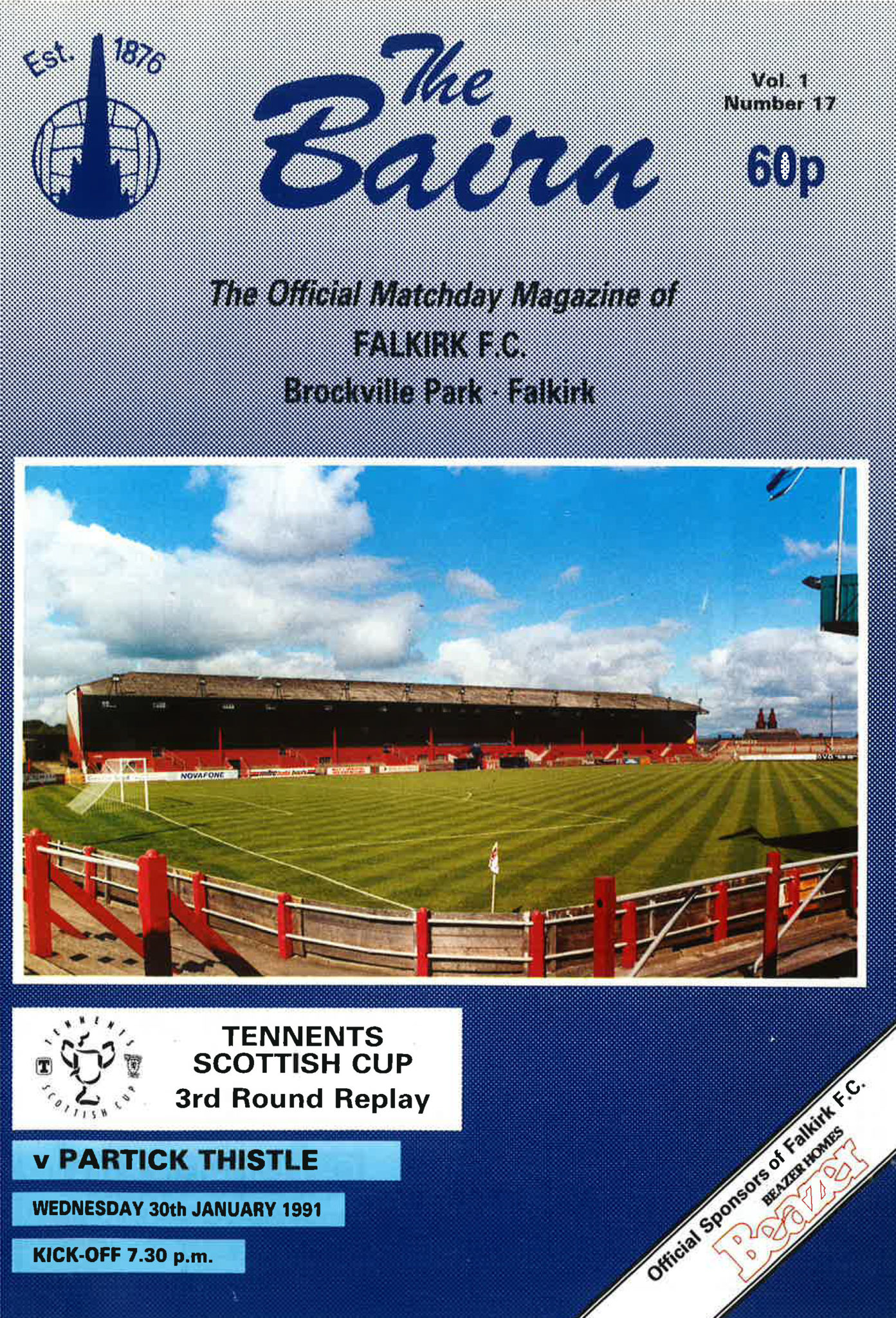 The match between the teams at Firhill the previous Saturday had been a fairly tame affair, resulting in a 0 – 0 draw, but the same could certainly not be said at the midweek replay at quaint old Brockville at the quaint old time of 7.30pm.

Both teams threw caution to the winds as they sought a passage to the next round. Sam McGivern gave the home side the lead after 16 minutes, but Jim Duffy equalised from the penalty-spot seven minutes from the interval. At this stage it was anybody’s game but Thistle found themselves with a mountain to climb in the second-half from the moment the over-combative Bobby Law got himself ordered off following a rash challenge three minutes from half time. Suddenly, changes were necessary to the interval team talk.

We feared the worst when in 47 minutes McGivern gave Falkirk the lead. However, Thistle showed they were up for the battle when that great penalty-box predator Colin McGlashan restored parity after 54 minutes. Well done, Dibble. Things got even better when nine minutes later Declan Roche fired us in to the lead. Could ten men hold out? That was the question in all Thistle minds at the minutes ticked away. Sadly, the answer was no. The unrelenting pressure became too much and Derek McWilliam, to became a very good Thistle player later on, struck with deadly effect in the 84th and 8th minute, so our Scottish cup dreams were over for another year, but we had produced a battling performance against the odds, and deserved to take the game to extra-time at the very least. 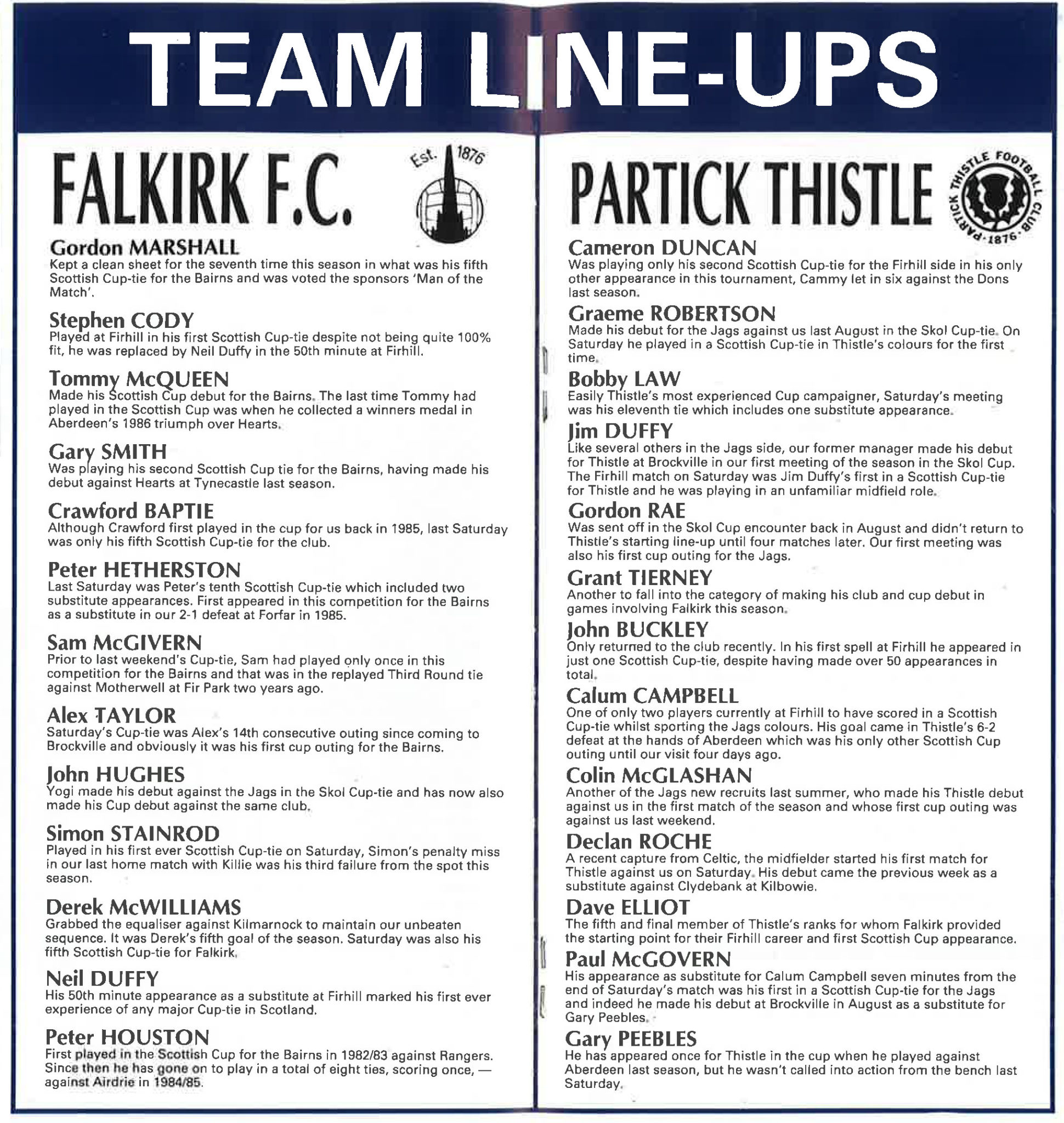 If you are not long enough in the tooth to have watched the jet-faced, flying , American Jimmy Walker, then next in terms of sheer, unadulterated pace is David Elliot.

In addition to the afore-mentioned Derek McWilliams, appearing for Falkirk was Peter Hetherston, who featured in a few matches for Thistle towards the end of the decade.

Within the programme there is a reference to a Scottish cup tie in 1929-30 in which Thistle beat Falkirk 3-1 at Firhill before a crowd of 23,505. Later, in the final at Hampden Park against Rangers the attendance was 107,475. Where are all these people today? I asked youngsters visiting Firhill – they’re dead, came the answer. Well ask a silly question and you’ll get a silly answer.