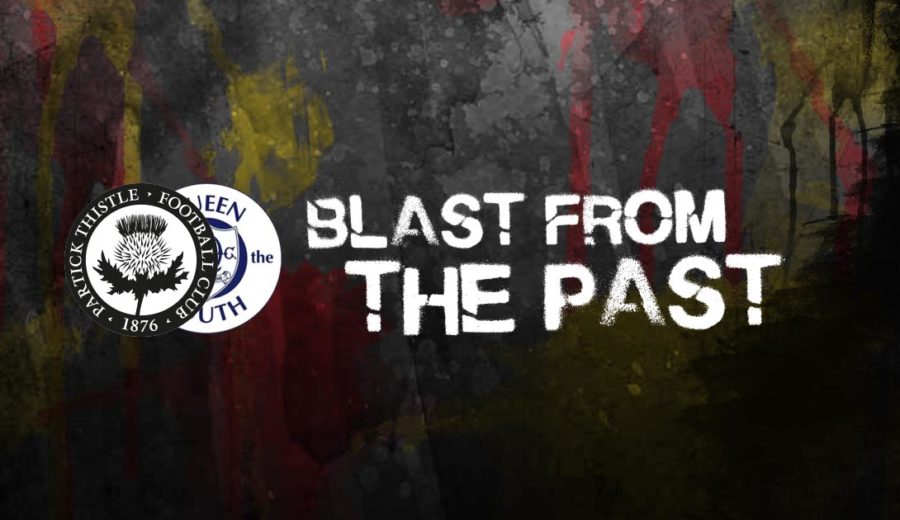 Blast From The Past – Queen of the South

Partick Thistle 3 Queen of the South 3 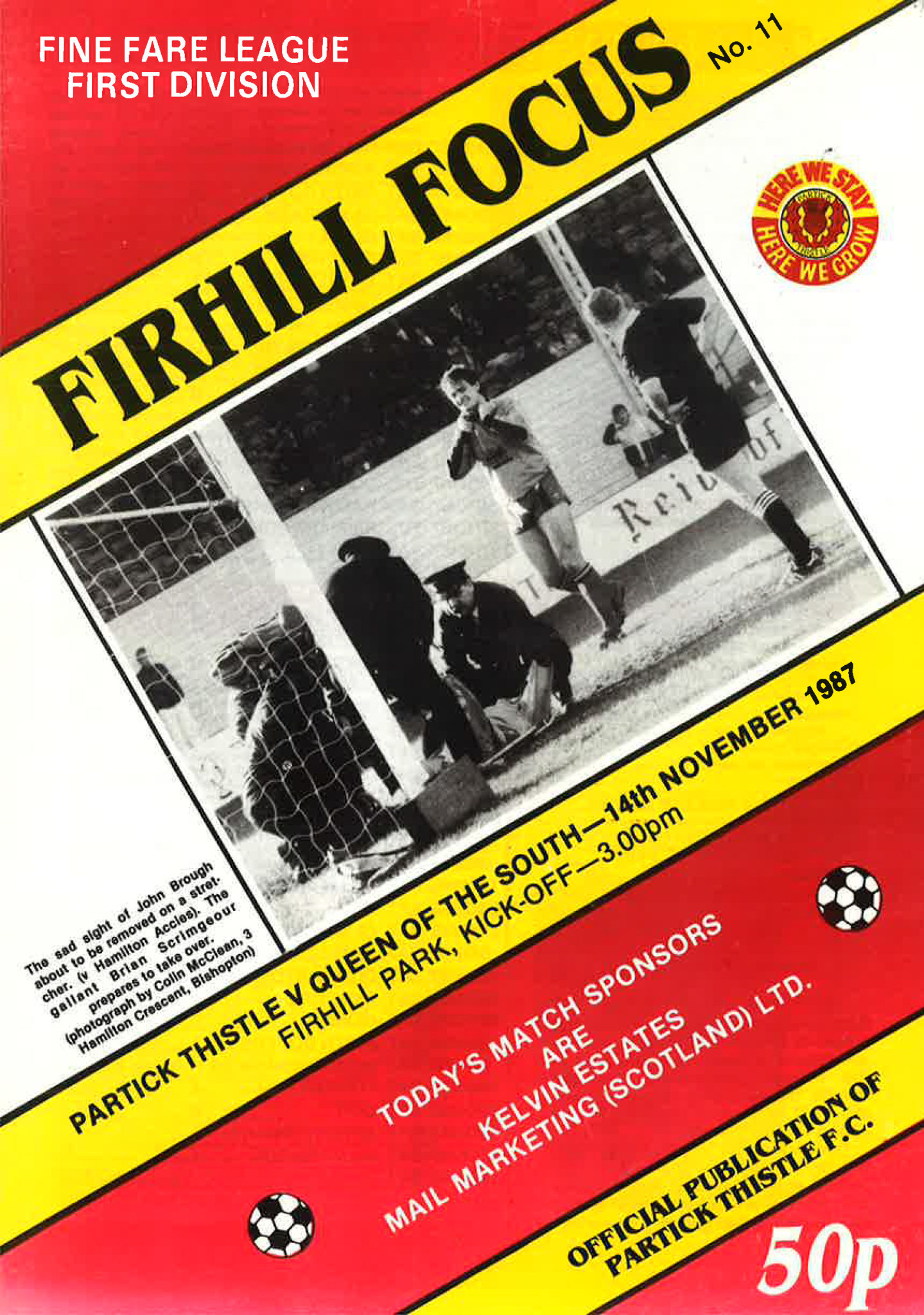 Over the years Thistle have handed out some really heavy thrashings to Queen of the South at Firhill, scoring no fewer than nine goals on a couple of occasions back in the 1940s and 50s. Add to that the fact that Willie Sharp scored what was at the time the quickest ever goal in British football when he netted after seven seconds against Queens in 1947, and to rub salt into the wounds, Thistle stalwart Jimmy McGowan played 543 first team games for Thistle and scored just once. I don’t need to tell you against whom!

Having said all that, I have to admit that in the featured game, the visitors fully merited the point they took back to Dumfries. 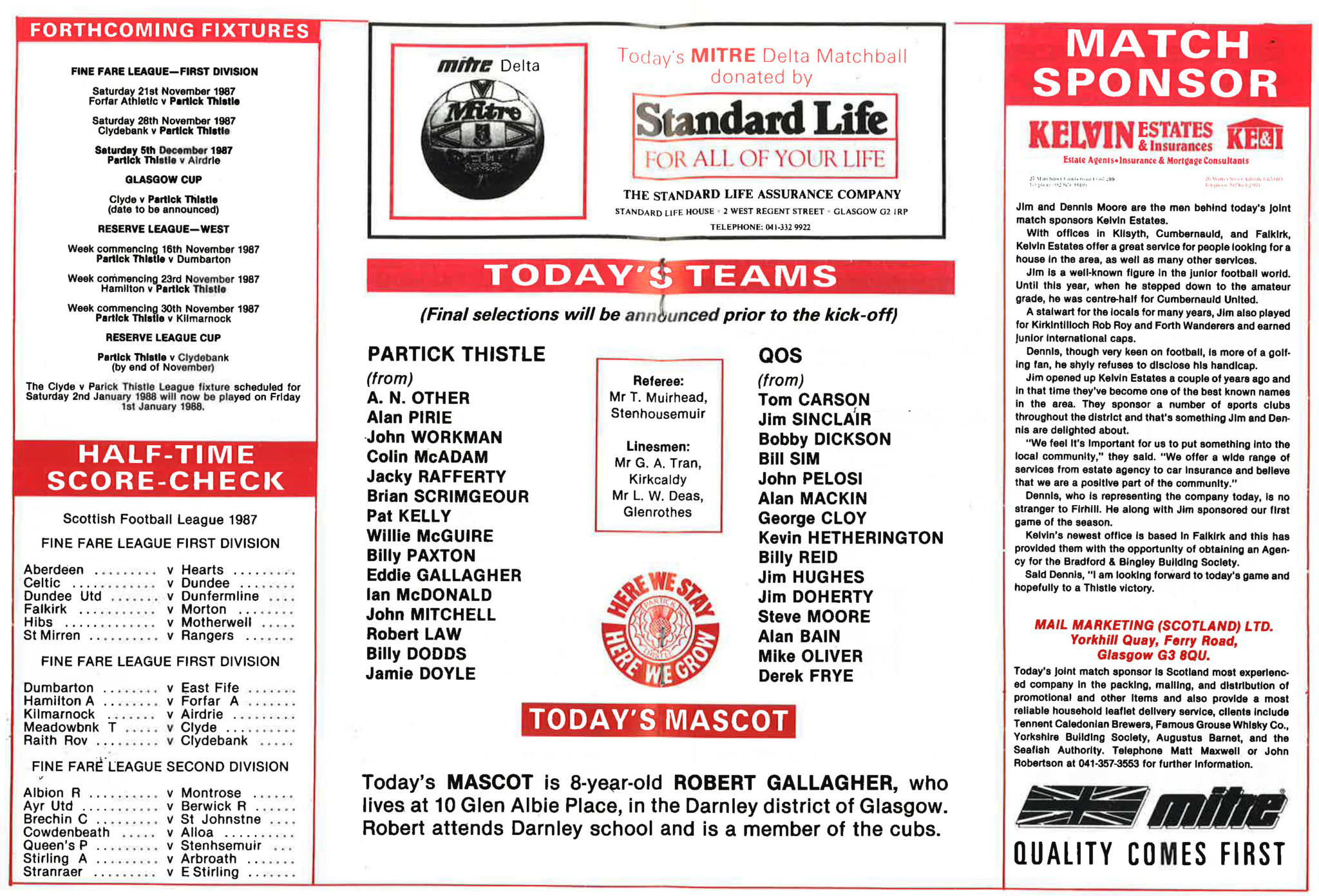 The last-mentioned opened the scoring after 20 minutes, but Derek Frye equalised just before half time and then gave Queens the lead after 59 minutes, only for Alan Dinnie to level with a rare strike shortly thereafter (he only netted 5 in total for Thistle). The pendulum swung towards the visitors again with 21 minutes left when Jim Doherty struck, but Billy Dodds levelled immediately. What had been a truly pulsating encounter ended correctly, with a share of the points.

With reference to the photograph on the cover of the programme, there was a happier ending. There were 55 minutes remaining with Thistle leading 1-0 after 38 minutes, and we managed to see the game out and claim the two points. I have to be careful not to say three points – that comes later.

These were troubled times for Thistle with particular regard to having a fit goalkeeper. We were forced to field five different goalkeepers in as many matches. Within the programme, our no. 1 is listed as A. N. Other – played for a few teams did that fellow.

Under Supporters’ News in the programme there is information pertaining to eight different supporters’ branches: – Cumbernauld, Maryhill, North-West, South-Side, St. George’s Cross, Summerston, Whiteinch, Livingston and District. We are, of course, living different times so we’ll not read too much into the fact that there were more supporters’ clubs but fewer people attending games (1,427 attended the featured match).