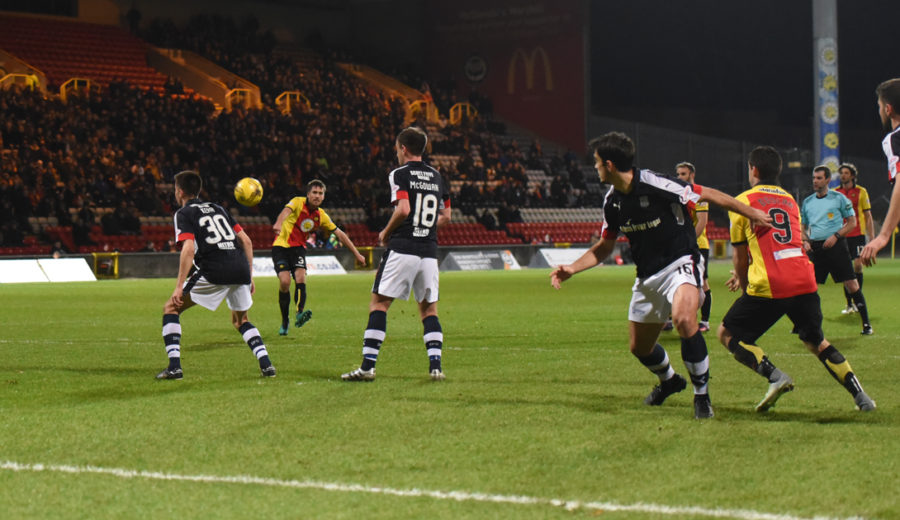 It was a delighted Callum Booth who spoke to ptfc.co.uk shortly after the 2-0 home win over Dundee at Firhill.

Goals by Booth and Kris Doolan gave Thistle all three points and moved us up to sixth place in the Ladbrokes Premiership table.

Booth opened the scoring with a sublime curled free kick from the edge of the box and we just had to ask the defender where that came from.

“I don’t really take free kicks so I just went over to make sure there was a left footer and a right footer over it to maybe confuse the keeper. When I’ve went over Sean Welsh has asked if I fancied it so I thought I would give it a go. I’ve looked and Haber is a big guy so I’ve had to go to the keepers’ side and luckily managed to curl it away from the keepers’ hands.

“I’ve only ever scored two free kicks and the other one was against the same goalkeeper so he must be lucky for me!”

The goal is Booth’s first goal of the campaign after a couple of close calls and was also his first goal at Firhill.

“It was a great feeling, it was my first goal at Firhill and it was an important one too so it feels even better. I had the one ruled out against Hamilton Accies and then smashed one off the bar at Hearts so I think it was coming. I’m delighted to finally get my first goal of the season.”

“It was important we built on the Ross County result. The manager made that clear to us before the game, we can’t just come out and think we will win the game. We have to turn up and work hard and make sure we earn the three points and I thought we did that tonight. We now have to take that into Saturday’s game against Kilmarnock. Just because we have won two doesn’t mean we will automatically win three, we can’t go out and just swan about, we have to continue to work hard and make sure we do things correctly.”

“It was great to get the clean sheet, it’s only the third of the season which isn’t good enough but we have something to build on now and we need to make sure we do that before the break.”

Next up is a match against Kilmarnock at a Firhill on Saturday and Callum is keen to end the year on a high.

“We are going for three in a row now and that would end the year perfectly, it just shows what putting a few results together can do. We’ve went from bottom to sixth in the space of a week and now we have to make sure we stay there. The league is so tight so we can’t get drawn back towards the bottom.

“We’ve got three weeks without a game after Saturday so we can recharge the batteries but we need to make sure we go into that on the back of a win and sitting sixth in the table.”