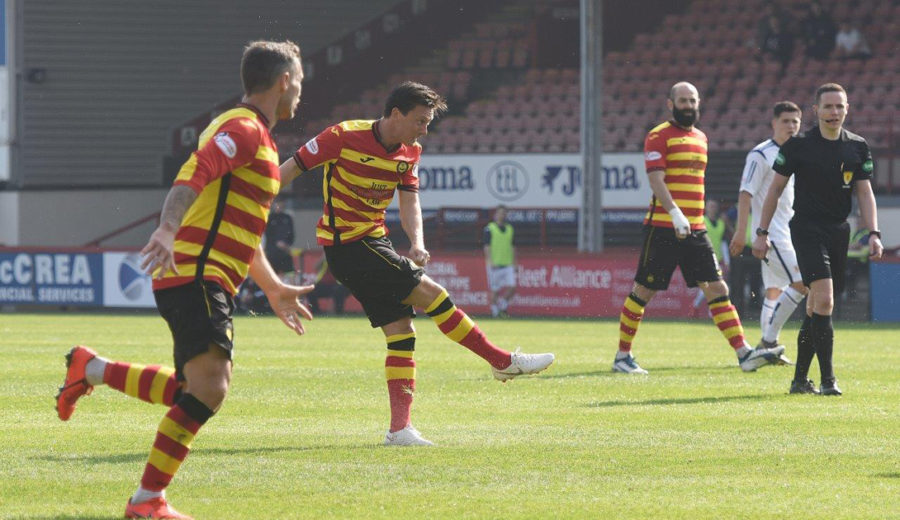 Joe Cardle came off the bench to help Thistle record a vital three points against Alloa at the Energy Check Stadium at Firhill.

A Half time sub, Cardle scored with his first touch, firing a low shot into the corner, before being involved in the winner, earning the free kick at the edge of the box allowing Scott McDonald to step up and curl home the winner.

Speaking to ptfc.co.uk he said:

“I’m delighted first and foremost to get the three points, that was a must win today. We were disappointed with the first half, we were poor. We could understand why the fans were so upset. We know ourselves it wasn’t good enough. We train all week and get the tactics right then we came out and didn’t play how we were meant to. It was frustrating.

“It was a game of two halves and I’m delighted that I took my opportunity when I came on. It was important that we got that goal early into the second half and were able to build on that and go on and win.”

After coming on at half time Cardle took a only a minute to make his mark on the game with a goal and the Jags number 32 revealed it was exactly as the manager had planned.

“The manager told me to get into those sort of positions and I’ve managed to do that and get the goal. I think it was my first touch of the game so I couldn’t have asked for a better introduction to the match.

“I was delighted to get the goal but even more delighted to help the side get the important three points. The three points is massive, if we didn’t get that win it would have left us in a bad position so thankfully we managed to do that. Now we have to go into Tuesday and do it again.”

Thistle travel to Ayr on Tuesday for a rearranged tie and know a win could propel them as high as 6th in the table. Joe knows how big the game is.

“We know we have three cup finals coming up. Tuesday is huge, that game could make all the difference. It’s the game in hand so we know if we win we gain points on everyone else, it’s the chance to drag ourselves out of the bottom positions and up the table.

“We’ll keep working hard before the next game and hopefully go out and produce again to get another much needed three points. We’ve got a great group of lads in there who all work incredibly hard and we need to just keep giving it our all.”

The Thistle winger had to settle for action off the bench in recent weeks but he was happy to make his impact when called upon.

“I know the formation we’ve been playing maybe doesn’t suit the way I play but hopefully I can make a difference and play my part between now and the end of the season to do what we need to do to stay up.”

Further reaction from Gary Caldwell and James Penrice to the weekend’s 2-1 in against Alloa Athletic is available to watch for JagZone subscribers – log in to see them now.