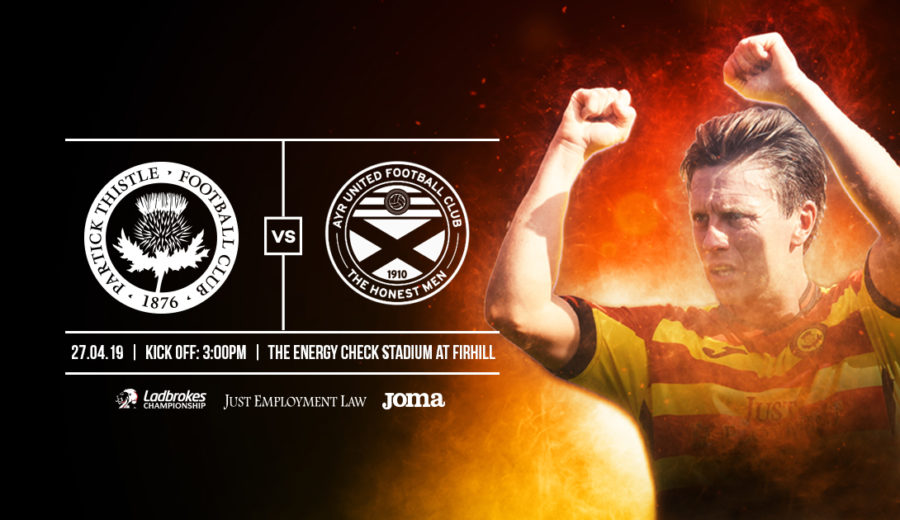 Joe Cardle admits the feeling about the squad is one of confidence but they know it’s not job done quite yet and they must make sure they get the required results to finish to dispel any fears of relegation.

After big results against Alloa and Ayr, Thistle will be looking for another win against Tuesday’s opponents gain on Saturday, this time at the Energy Check Stadium at Firhill.

Speaking exclusively to ptfc.co.uk Joe said: “We know the job isn’t done yet. The mentality of the team has been spot on so far and we have to keep that going, we can’t relax now, we know it’s another vital game on Saturday and one we need to win.

“If we manage to get what we need to secure our safety then it’s a massive achievement compared to where we were in January.

“Saturday and Tuesday there were both massive games for us and we’ve come through them with six points. We’ve got another massive game on Saturday and we’ll look to pick up another vital three points from this one too.”

A tricky tie on Tuesday against Saturday’s opponents ended in a 1-0 Thistle victory and Cardle  is expecting another challenging 90 minutes.

“We knew Tuesday was going to be a tough game and it was, Shea came up with a fantastic goal and we got the win but it didn’t come easy. It was a team performance, we all worked extremely hard, the defence were solid and helped us get what was needed.

“The first goal in this league is important, we showed what can happen when you do that on Tuesday. You have something to hang on to and with the back four and Jamie playing how they did then it really helped us. Even the midfielders and the forwards defended all over the park though and it was a battling performance, we know we’ll have to do the same on Saturday to get the win.”

Cardle arrived at the club in January and has helped Thistle climb up the table. Despite spending most of his time as a Jag in the bottom two, Joe always felt confident stepping onto the pitch with his team mates.

“From when I’ve come in, there’s never been any doubt in my head, I’ve felt extremely confident knowing the players I’ve got around me. You see the players every day in training, I know the quality we have and you go out feeling confident with those sort of players around you.”

If either Alloa or Queen of the South fail to win and Thistle beat Ayr, safety will be secured but the Thistle number 32 admits the manager has them focused only on one game, their own.

“We know if results go our way we can secure safety but the gaffer has been very clear that we only need to concentrate on ourselves. There has been times in the last four or five weeks where we’ve been coming in and checking results elsewhere and he’s always told us to concentrate on ourselves. He told us that if we went out and did what we needed to do then things would fall into place for us, and he was right. We know it’s still all in our own hands but we have to go out and focus on influencing what we have the power to influence, our own performance and result.”

Joe has made a big impact in the last few games and he is hoping to continue that during the run in.

Can’t make it to the Energy Check Stadium at Firhill? Jagzone members can listen to live audio commentary of the match. JagZoneLIVE begins at 2:45pm tomorrow.