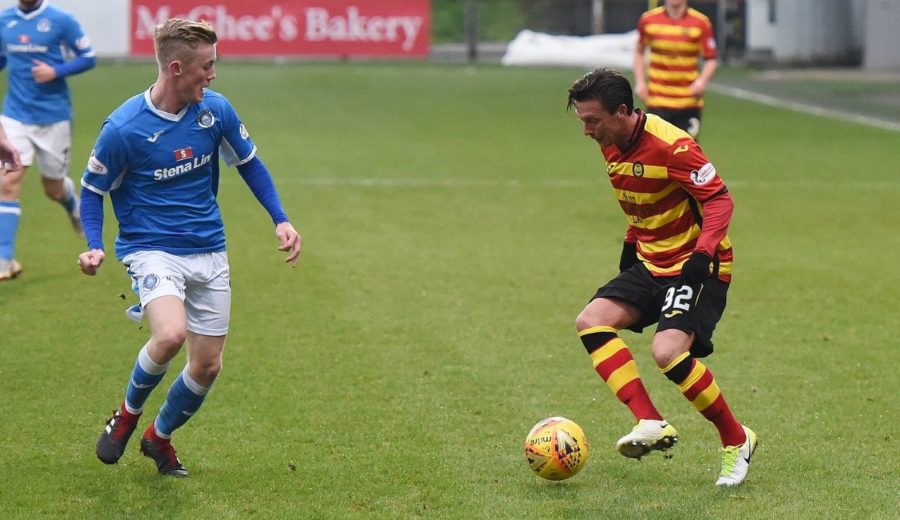 Joe Cardle was delighted with the way his first start in red and yellow went as Thistle defeated Stranraer 4-1 to progress to the next round of the William Hill Scottish Cup.

With other results in the competition showing how difficult ties against lower league clubs can be, Joe was happy to make it safely through to the next round.

Speaking to ptfc.co.uk he said: “It’s a potential banana skin. We know Stranraer have some good players and we had to be professional on the day to make sure we got the result and got into the hat for the next round.

“We started the game well with a good tempo and it was important we got the first goal and we managed to do that. It was a great finish from Fitzy, I saw him make the run and I managed to find him and he finished it off.

“The game was comfortable in the end but results elsewhere showed what can happen in these sort of games so we are delighted to be through to the next round and look forward to it.”

Cardle was involved for the first time from the start as a Jags player and admits he was nervous pre-match but soon settled in.

“It was good to be out there. It was my first start for maybe about 3 months so it was great to be back out there in the first XI.

“I was nervous before the game, because it’s been so long but I think it took me about 5 minutes to settle into the game.

“I’ve been in training for five or six week with the boys so now that I’m signed it’s now time to go out and try to make things happen. I managed to help the team today and that’s what I want to be doing every week from now on.”

Cardle set up the first before scoring the second and he was pleased to make an impact in the game.

“It was great to get on the scoresheet. I probably could have had more but was happy to get my first goal for the club and hope to be able to build on that.

“I’m here to score goals and create goals, I believe I offer something a little different in the squad. Hopefully I’ve staked a place in the team now and can get a few more goals and assists under my belt.”

Thistle now have to focus on league business as Queen of the South visit The Energy Check Stadium at Firhill this coming Saturday.

“We have to quickly get our focus back on the league. We have 15 league games left and they are all huge for us, we know that ourselves. We are in a position in the league where we don’t want to be but it’s up to us to get ourselves out of that position.

“I know we are capable of doing that and hopefully we can flourish as the season goes on and get ourselves up the table.

“Confidence has obviously been low but after a good result today, we’ll be looking to carry that momentum into the league and we now have to work hard this week, ahead of a very important game.”

More reaction from Aidan Fitzpatrick and Steven Saunders as well as Jags gaffer Gary Caldwell is now available to Jagzone subscribers. Log in to see it.