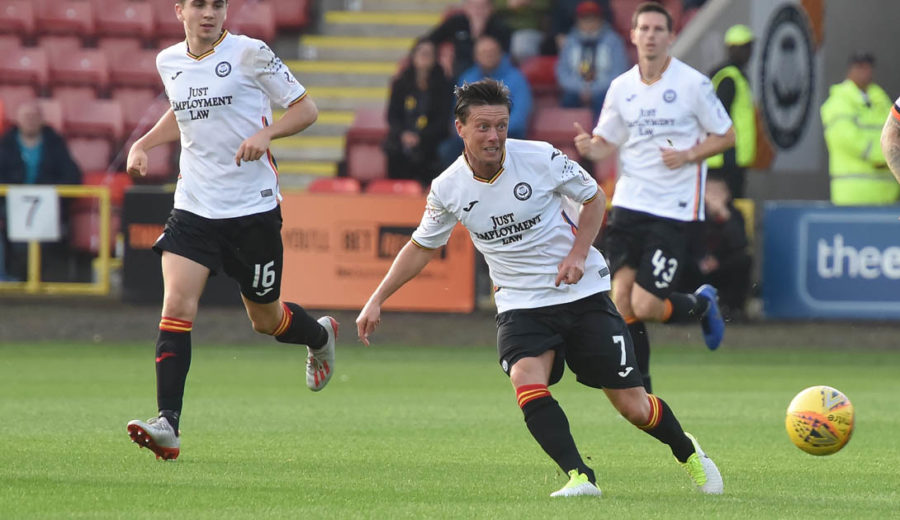 Joe Cardle was left wondering what more the team had to do as they came away from Tannadice with nothing despite dominating the match almost from start to finish.

After a disappointing display against Arbroath the team fought for everything and were massively unlucky not take anything from the match.

Speaking to ptfc.co.uk Cardle admitted the players were hugely disappointed. He said: “We’re devastated at the result, especially after the performance we put in. We feel we played well from start to finish and the manager even told us after it’s up there with the best we’ve played since he came in. So, to lose it like we did is gutting.

“I think we all worked extremely hard, we put in a right shift and created chances. I think you have to try take positives from it but it’s about getting points and we’ve not managed to do that.”

The Jags number 7 felt the players needed to show a reaction after Saturday’s disappointment.

“We knew Saturday wasn’t good enough. We were all disappointed on how it went. We knew we had so much to give, I know I wasn’t involved but I’m part of this team and we win and lose together. We all wanted to go out tonight and show collectively that wasn’t us. We didn’t manage to get the win, but I thought we fought for everything and that’s the minimum we can do each week.”

Next up is a trip to Somerset to take on Ayr United and the winger knows it’s important to go and take all three points.

“I think we have to try and take that into next week and put the result right, I know we can’t keep saying that and it’s frustrating for everyone, the players, the management and the fans but only we can turn it around.

“We will work hard again during the week in training. We have to go out next week and show the same work rate and show how much we want to win. I think sometimes when you are at the bottom the luck doesn’t go your way, but we know if we go out and perform these things will turn around and we have to do that on Saturday.”

Joe had missed Saturday with injury but after 80 minutes in Dundee he is looking forward to the game on Saturday.

“I’m back feeling good. It was late on Friday when I felt a tweak in my hamstring. I had some issues last season with it, so it was best not to push it on Saturday, I had a few days’ rest, done everything I needed to and was back feeling good tonight. I now can’t wait to get out there on Saturday and hopefully the result matches the performance.”