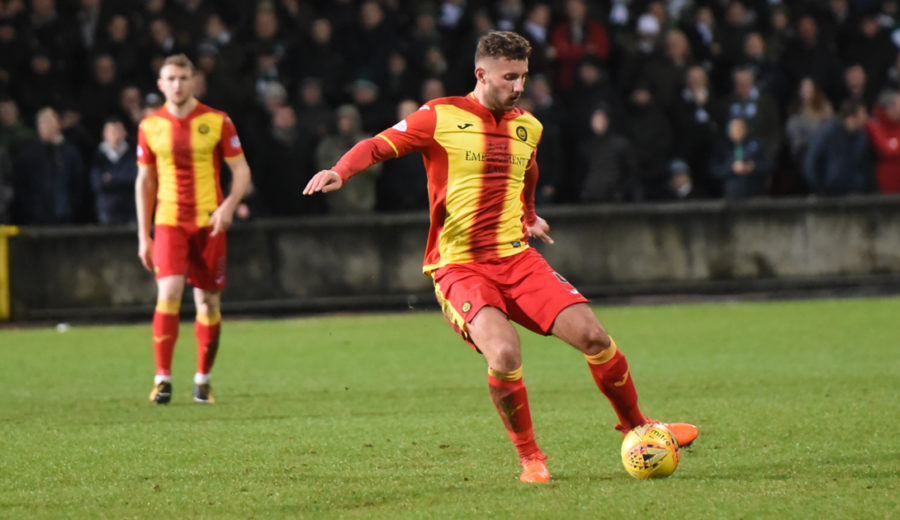 It was a whirlwind few days for Baily Cargill, he was only confirmed a Partick Thistle player on Tuesday afternoon and by Tuesday night was lining up in the starting XI as Celtic visited The Energy Check Stadium at Firhill

The defender couldn’t help his new team mates as Celtic came from behind to win 2-1 but he enjoyed his first appearance in the Red and Yellow.

Speaking to ptfc.co.uk after the game Baily said:  “I didn’t really have much time to settle in with the lads. I travelled up Sunday, trained Monday morning and then played tonight so it’s been a quick couple of days. I was thrown in a bit cold but I don’t think that’s a bad thing. I have to take the chance and make the most of the opportunity and hopefully I done that.

“It was great to get my debut, It was a tough test against a very good team but I enjoyed being out there”

Conor Sammon put Thistle ahead but two goals in the second half gave Celtic all three points and Cargill was disappointed not to take anything from the game.

“First half I thought we done really well and limited them a little and created a few chances ourselves.

“We got the goal and went in at half time in good shape but in the second half their class came through in the end so we are disappointed.

“When you go ahead, if you keep a clean sheet you win the game, so I’m disappointed not to do that. Even a point would have been a good result for us but we’ve not managed it.”

Despite the defeat Baily thought there was a lot of positives to take from the performance the players put in.

“There were a lot of positives to take from the game with our performance and we can take them going forward.

“We had some good performances, James Penrice got man of the match beside me and he was excellent. We’ve got a lot of positives to take into the game on Saturday now. It’ll be another tough game and we now have to put tonight out of our minds and look forward to that.”

The Jags number four will now look to settle in ahead of that game and hopes to continue to show what he can do.

“I now have time to settle in and look forward to trying to play football, improve and learn as a player and try and help the team up the table.

“I’ve played in a four most of my life but when I went to Fleetwood they play with a three so I’ve learned that side of things to, so I like to think I’m quite versatile and can play in whatever formation we need to play.”

More reaction from Mustapha Dumbuya and James Penrice as well as Jags gaffer Alan Archibald is available now to Jagzone subscribers. Log in now to see it.