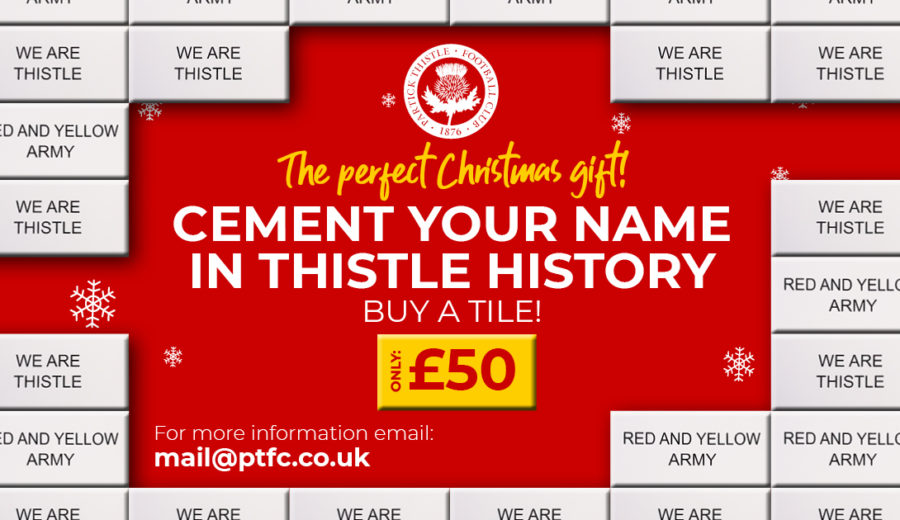 Cement your place in Thistle history

Following feedback from the PTFC Trust supporter survey earlier this year, one of the most requested initiatives from Thistle fans was the return of the Buy a Brick scheme and the repair of the bricks currently located on the front of the Jackie Husband Stand.

Having explored every avenue available to the Club and with repairing the existing bricks not a viable option, a decision was made to place replacement tiles inside the Jackie Husband and John Lambie Stand concourses to reduce the potential for weathering or damage in the future.

The new tiles will be located on the internal concourse wall of both stands with supporters able to choose in which they would prefer their brick to be located.

Any supporter who wishes to purchase a new tile, but does not have a brick currently in place, will be able to buy one for £50 with inscriptions up to two lines long with 16 characters per line included.

To cement your place in Thistle history all you need to do is either in person at the Energy Check Stadium at Firhill, by phone (0141 579 1971) or by email ( ). If you have an existing brick that you would like transferred you will need to know the words currently written on the brick as well as a rough location. If you are buying a brick for the first time please have your inscription ready – remember it can be two lines long with a maximum of 16 characters in each line**.

New and transferred tiles will start to be added to the two concourses in early 2019 with an unveiling ceremony planned for February. In the meantime all purchases made before December 21st* will receive a certificate confirming their purchase in time for Christmas.

*Christmas delivery cannot be confirmed for certificates being posted to oversees addresses.