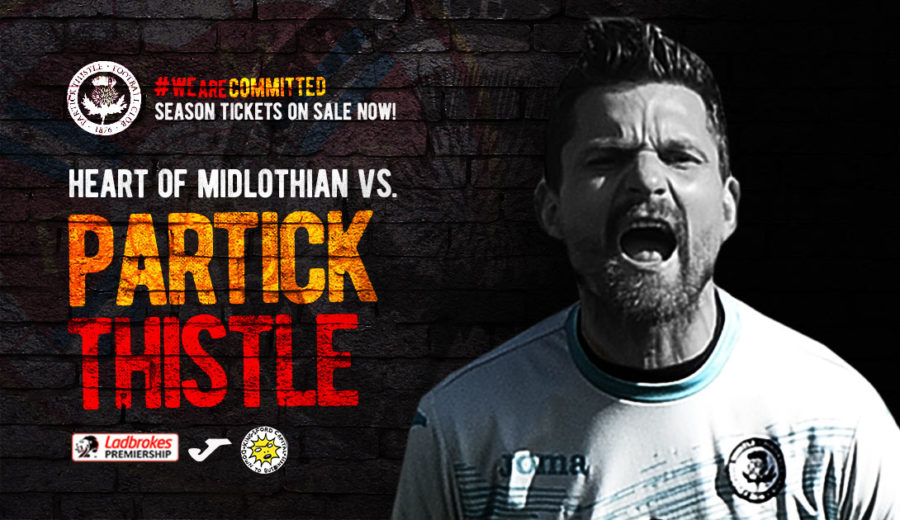 After a massive effort to get here it’s time for the top six post split fixtures. While the main aim of the season has been achieved, Tomas Cerny is still hoping to make the season even better by finishing further up the table.

Thistle sit four points behind Hearts and face the Edinburgh side at Tynecastle tomorrow hoping to close the gap to a single point.

Cerny knows a win is important if the team are to aim higher than sixth.

Speaking to PTFC.co.uk he said: “I think we now have five very hard games between now and the end of the season. We know they will all be tough but they are the games we want to be playing in at this stage of the season. I think if we want to have a hope of catching Hearts then we need to beat them on Saturday and we will do everything we can to do that.”

Thistle defeated the Jambos last time at Firhill and put a very good performance at Tynecastle just before Christmas while Hearts have been on a poor run of form since the winter break. However, Cerny knows they are still a very good side.

“We beat them at Firhill and the match last time at their ground it was a game of two halves, we had the second half and should have won the game so it will give us confidence that we can go and win the match.

“Hearts have been inconsistent recently and by their standards are on a poor run but they are still a good team and are hard to beat at Tynecastle.

“We don’t know what Heart team will turn up so we have to concentrate on ourselves and make sure we impose our game on to them and we can hopefully put in a performance and take all three points.”

After a first defeat in nine league matches last time out the players have had a week off due to the Scottish Cup semi-finals last weekend and the Jags goalkeeper thinks the break came at the right time.

“I think the break has come at the right time, but we will only know for sure if we go out and put in a good performance on Saturday. It’s been good to have more numbers in training compared to the week before the Rangers game. We go into the game against Hearts recharged and raring to go.

“I’ve been happy with my performances recently and I was glad I was able to play my part in getting the team into the top six. I feel I am playing well and helping the team out.  I don’t think we played too well at Ibrox but it meant I was busier and was able to make a number of saves which I was pleased with.”

The Thistle number one has been nominated for McCrea Financial Services Player of the Year after winning last year and will be hoping to defend his title at the Player of the Year event on Sunday. However, he was quick to acknowledge the team effort.

“It’s great to be nominated for player of the year. This year I think it is incredibly difficult to pick six nominees never mind a winner. There’s a number of players who have had great season who weren’t able to be on the nomination list.

“I think it’s been a real team effort this year and it’s all been about the team and the way we have performed as a group. Everyone has chipped in throughout the season and it’s not just been the same eleven, the whole squad have played their part in getting us where we are.

“There’s players all over the park nominated and that shows how much of a team effort it has been. You need a team to achieve things and that is why we have managed to do what we have”

More exclusive preview interviews, with Adam Barton and Christie Elliott as well as Thistle gaffer, Alan Archibald are available to Jagzone subscribers. Log in now to see them.

Not secured a ticket to Tynecastle? Jagzone members will also be able to watch highlights of the game from midnight and will be able to listen to live audio commentary from Edinburgh.

Tomas has committed, will you join him? 2017/18 season tickets are now on sale.