Tomorrow evening’s Community Champion, with our partners at McDonalds Maryhil, is a gentleman who has been nominated by a number of community organisations. 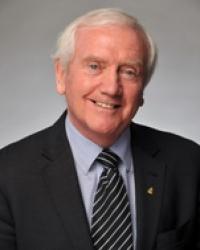 Allan Stewart has been nominated by a number of local community organisations in the north of Glasgow, including the Partick Thistle Charitable Trust.

He has a life long commitment to community activism, public service and volunteering. Allan was at one point the deputy Lord Provost for Glasgow but this nomination is for the difference he has made to local communities.

Spireview Housing Association wish to thank Allan not just as a local councillor for over the last 10 years but especially for being the driving force behind the new community hub in Royston, which they will start building later this year.

This won’t come as a surprise to those who support Petershill Juniors. Allan was very heavily involved in promoting, supporting and nurturing the redevelopment of Petershill and the delivery of a modern setting for the junior football club.

At Partick Thistle, Pauline Graham the chair of the Charitable Trust said “I’d like to say a special thanks for his continued support to our work in the community. He has been a real asset to the Board and has given up his time as a trustee since PTCT was established in 2011.”

Allan was struck down in 2011 by a heart attack, which resulted in him having to be put into a medically induced coma in an attempt to limit brain damage. He had to entered a rehabilitation programme when he left hospital. To most people this would have meant taking some rest but not him.

The following year he spoke at events about his own experiences of rehab and also took on additional commitments, joining the board of local housing association, ng homes. Their Chief Executive, Robert Tamburrini praised his involvement:

“Allan has made a great contribution to the work of ng homes in his role as a Board Member over the past 5 years.  Allan cares passionately about people and Glasgow. During his time at ng homes he has worked tirelessly to make a positive difference to the North Glasgow community, especially in community regeneration.

He works well with others, he is always positive and enthusiastic and he has a real drive for getting things done.  He has been at the forefront of many successful initiatives and partnerships and his commitment, dedication and support are exceptional. The Board and staff members thank Allan for his great work.”

“Allan worked hard for his constituents but he did much much more as an enthusiastic and committed representative for the whole North of the city.

He was a strong advocate for the many local community groups. However he was at his most animated when speaking to the Council about his pride at the work and activities of Partick Thistle and their Charitable Trust developing youngsters and providing community activities for all.

He has been a real community champion for the North of Glasgow.”

“He was a key player in our local strategy, delivered many positive outcomes for the Housing Associations, Schools, and other community groups., and attended and participated in all our community events. We will miss him greatly.”

Tomorrow evening Allan will be recognized, alongside our partners at McDonalds Maryhill as a real Community Champion.

Do you know someone who deserves to be recognized as a Community Champion? Nominate them by emailing   to receive more information.