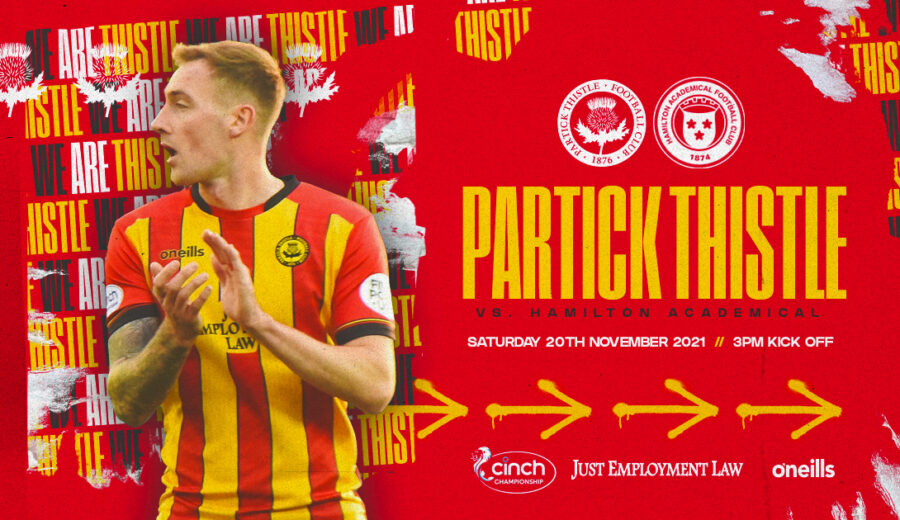 Partick Thistle welcome Hamilton Academical to Firhill in this weekend’s cinch Championship match. Thistle are unbeaten in seven league games after hammering another four goals past Ayr United at Somerset Park last time out, moving into the top four in the process.

It was a convincing 6-1 win for the Jags previously against Accies and, as it happens, David Moyo’s injury time consolation from that game was the last goal Thistle conceded. Kevin Holt has been a key part of the defence that has kept five clean sheets in the games since and he spoke to ptfc.co.uk ahead of Hamiton’s visit to Maryhill, beginning by discussing the confidence levels in the squad:

“I think the confidence has been there since the start of the season. We started the league campaign well and even though we had those three losses in a row you could see in those games we weren’t playing that badly and the confidence was still there.

“In the game at Hamilton we were really clinical, and I think that set us up to have a bit more belief in an attacking sense and we’ve done really well defensively as a team since then as well. We’ve kept a lot of clean sheets in our last few games and that lets the forward players go and have opportunities to win us games so when you know you can score and keep clean sheets you know you can go into games and be confident of coming away with a result.

“There’s a good feeling about the whole club at the moment and everyone believes that this club can push to be right at the top of the table. We can’t get carried away though. Things can change very quickly in this league so although we have that self-belief at the moment we need to make sure we keep producing results and keep picking up points each week.”

Kevin has been deployed at both left-back and centre-half throughout Thistle’s league campaign this season but the 28-year-old says he is comfortable playing wherever he’s needed.

“I don’t mind swapping positions in defence. Where I played the majority of my football last year was at centre-half but before that I played a lot at left-back, but I really enjoy playing centre-half. Wherever I play I’m glad to be getting games because I know that competition for places is really high. There’s a squad here where everyone has the quality to play every week and you have to be at your best to stay in the team.”

With the Maryhill men hammering Accies in Lanarkshire last time the two sides met, Stuart Taylor’s outfit could be out for revenge this time. Looking ahead to the rematch, Kevin doesn’t think it will be comfortable for Thistle this time around.

“I think it’ll be a tough game. On the balance of play last time we faced them, Hamilton passed the ball quite well but they were really open at the back. When we scored they opened up a bit to try to get back into the game but obviously we managed to run away with it. Despite that, they’ve shown already this season that on their day they can be a very difficult team to play against.

“I think in the game at their stadium we were really clinical, and it was one of those nights for us where every chance led to a goal. Obviously, we’d be delighted with another result like that this weekend but I know it definitely won’t be quite as straightforward this time round.”

Exclusive video interviews with Thistle assistant manager Neil Scally and Jamie Sneddon will be available for JagZone subscribers to watch today – log in to view.

JagZone subscribers will be able to tune in to live audio commentary for our clash with Hamilton, starting at 2:30pm – click here to tune in.