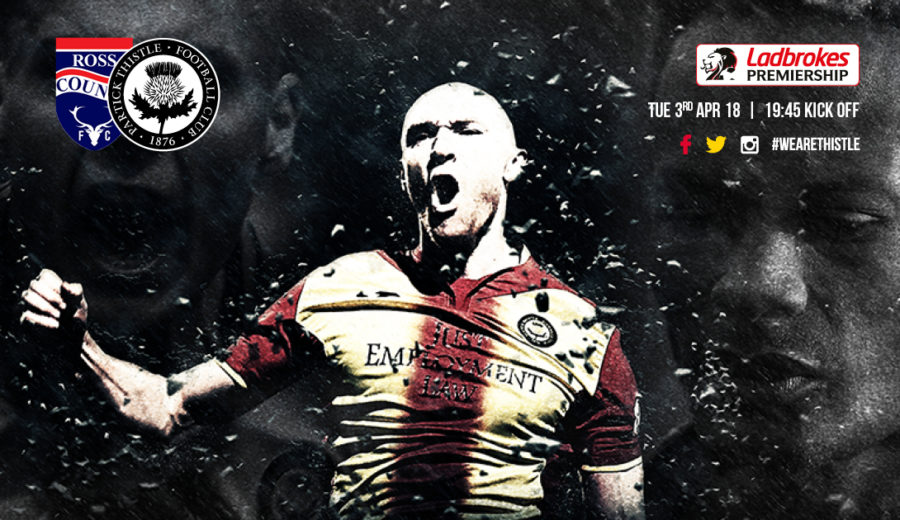 Conor Sammon: It’s up to us to take control

In a season of difficulty for Partick Thistle, one of the shining lights has been the recent form of on-loan Hearts striker, Conor Sammon. The ex-Derry City man, having failed to score until mid-December, has garnered a tally of nine goals in Thistle colours, netting his maiden Jags goal against Motherwell in a 3-2 win. He has accounted for seven of Thistle’s 11 goals since returning from the winter break and has become a key member of the squad. As such, his contributions will be needed now more than ever as the Jags travel north to take on the Ladbrokes Premiership’s bottom club, Ross County. A win for the Maryhill men would put them six points clear of their opponents, however, a Staggies victory would lift the Dingwall side off bottom spot on goal difference. Conor spoke to ptfc.co.uk to preview one of the most important games of this season’s relegation battle.

Conor began by telling us that he can’t wait for the game as he just wants to get back out onto the pitch following Saturday’s disappointing result at Easter Road.

“I’m looking forward to what will be a massive fixture in relation to how our season pans out. Obviously, with the position that ourselves and County are in, there is a lot more than just three points at stake and we want to make sure that we leave their place with the win. Everyone was feeling a bit down after Saturday’s match as we felt we should have got something from it but there were positives to take from that game; there was an improvement which was encouraging to see. We managed to stop a good Hibs side from playing for long periods and we have to take confidence from the performance if not the result.”

The Irishman wants to see the team continue the improvement that he mentioned going into the game against Ross County.

“Where we are in the table, it doesn’t matter how you perform at the end of the day, however, if you can improve steadily then you can try to build a bit of confidence from that which can help you going forward. Not getting any points from Easter Road was gutting but we played some good football and matched a great Hibs side for 70 minutes. We wanted a reaction after that Hearts match but it’s important that we carry that level of energy and determination into the game tomorrow.”

Conor also thinks that it’s important to remember that Ross County aren’t exactly in a rich vein of form themselves and with what’s at stake, they may be even more nervous than the Jags going into the game.

“There will be plenty of nerves on their side tomorrow night. There is huge pressure on County to get that win as every game that they spend bottom is another game closer to going down. It’s up to us to take control of the game early on and get on the front foot. If we can put them under pressure in the opening stages, it will be difficult for them to get out of that considering the poor form they’re in.”

In recent weeks, Thistle have faced some tough tests on the pitch. Games against Aberdeen, Hearts and Hibs have made for contests wherein the Jags didn’t get too much of the ball. However, Sammon is hoping that against the league’s bottom side, Thistle can flex their attacking muscles a bit more regularly than they have in their last three games.

“The games are always different against the top teams in the league. They try to play football and don’t have the same desperation as the teams in the lower places. The games against teams around us can get scrappy at times and that makes for a different type of game and we have to approach these games differently. When the opposition are hanging onto the ball, you can try to hit them on the counter attack but in games where you have more of the ball, you’re trying to carve open the opposition and that can be just as tough.”

Can’t make it to the Global Energy Stadium? Jagzone members can listen to live audio commentary of the match. JagZoneLIVE begins at 7:15pm on Tuesday.