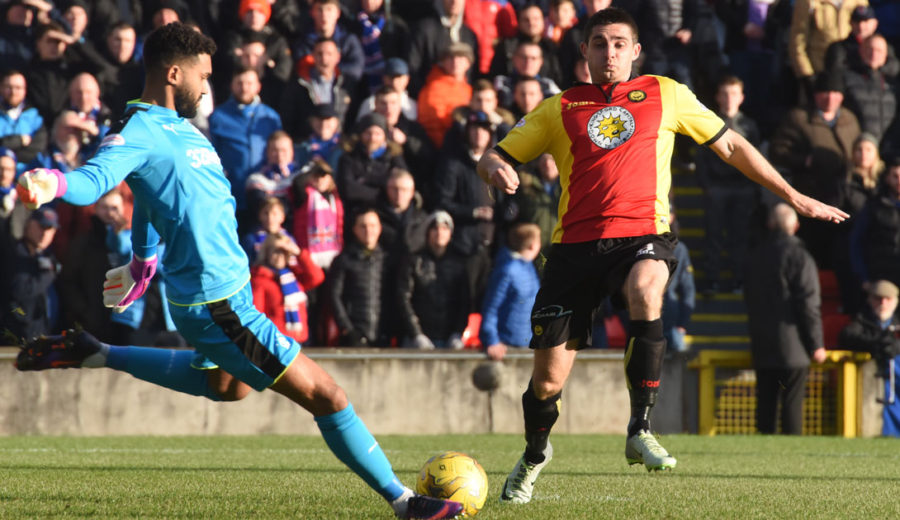 Doolan: A hard one to take

It was an obviously gutted Kris Doolan that spoke to ptfc.co.uk after the 2-1 home defeat to Rangers at Firhill. Doolan had put Thistle ahead only for Rangers to equalise and then win it in injury time.

The striker was finding it hard to take after the final whistle. “It’s a hard one to take. It’s devastating. To lose a goal 30 seconds before the full time whistle in a game they haven’t really troubled us is hard to take.

“When you are up 1-0 especially so late in the game you expect to see it out and win the match. They equalise when they hadn’t really caused us much problems and you are then gutted to only take a point. So to then end up losing the match. We deserved to take something from the game with our performance and it’s tough to believe we didn’t take anything from the game.”

Despite the defeat Dools feels there is a lot of positives to take from an impressive performance at Firhill.

“We played very well and there is a lot of positives to take from the game. We spoke after the match about how we played and we know if we play like that going forward we will win football matches and take points. “

Next week sees a trip to Hamilton in a match which becomes important and Doolan knows they must go and take all three points.

“We know it’s a big game against Hamilton next week, especially after that result but we have a lot of positives to take from the performance today and if we play like that next week then we know we can go there and win it.

Doolan opened the scoring and it moved him on to four for the season and up to twelfth in the all-time Thistle scoring charts. While the striker was pleased with his goal he just wished it has meant something.

“It was pleasing to score, it always is but for it to mean nothing in the end it takes the shine off it, I would much rather have won the game and not scored.

“I’m slowly climbing that all time goal scoring ladder, it’s pleasing and I’ve got my eye on that top ten. I’m getting towards that 100 too but I know I’ve got a bit to go and I need to keep scoring and helping the team with as many goals as I can.”