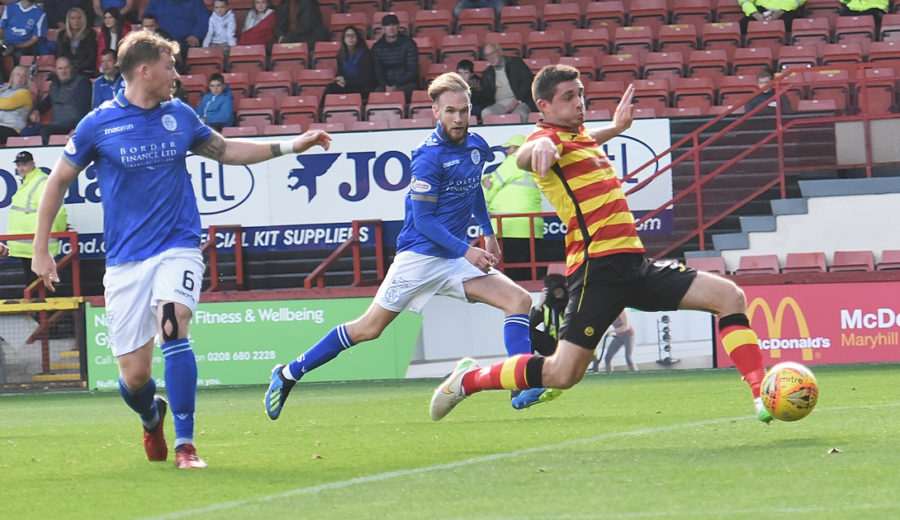 Kris Doolan was delighted with the way the team battled back from an early set back to take a deserved three points from Queen of the South at The Energy Check Stadium at Firhill.

The striker grabbed the first goal of the game and was happy with the resilience the team showed in coming back from behind not once, but twice, to take all three points.

“We’ve pulled ourselves back into it twice after going behind which we shouldn’t have to do but we’ve shown a lot of resilience to get ourselves back in front and deserved the three points.”

There were five goals in the first half and Thistle managed to find themselves ahead at the break before seeing the game out, Doolan was delighted with how the team handled going behind.

“It was a bit of a crazy first half, they’ve scored their first goal with their first move into our half, but that’s how quickly teams can score a goal, it takes two seconds to score a goal, so we really can’t switch off like that. We’ve shown great character as a team after that to get ourselves back into the game and then in front and manage to see the game out.

“That should be the way every time, just because you fall a goal or two goals behind doesn’t mean you are out of the game, we can’t have that mentality. You’ve got to believe that you can still get back into the game; as I said it takes two seconds to score and we’ve got to keep thinking that and believe we can still win games.

“That is the way I think and hopefully the other lads are starting to think that too. We have the firepower to go and win games and score goals but we need to, from the start now, try to not go behind, let us build on the momentum going forward and make sure we’re not pulling ourselves out a hole.”

Doolan had the ball in the net for the third league game in a row and he feels he has his scoring boots back on.

“It’s starting to click for me on the goals front. That is three league games in a row I’ve scored in, I’m counting that one against Morton, don’t know if anyone else is, but I am, that is three for the season.”

“It was good that happened to me and not anyone else because I’ve scored plenty and can move on easily and I’ve used that to go on a run now and hopefully I can take that into next week too.”

After scoring the first Thistle goal against them on Saturday, the goal was his 10th against Queen of the South and it’s a team Kris enjoys playing against

“I’ve got a good record against them and you always go into the game feeling good when it’s a team like that. I knew I had scored quite a few goals against Queen of the South before, I didn’t realise today was 10 but it’s a nice record to have and hopefully I can continue to get goals against them.“

The home form has been great so far this season and now the Thistle number nine is hoping to take that form away from home as Thistle travel to Dunfermline on Friday night.

“We’ve been making it hard for teams to come here and we’ve got to keep that up for the rest of the season but we need to learn to take that form away too and learn to use that resilience away from home too and use those passages of play and not get drawn into a scrappy game just because we are away from home.

“That is why we’ve scored goals at home, we’ve played good football, and we’ve created chances and limited chances to other teams. We have to believe we can do that away from home too.

More reaction from Christie Elliott and Blair Spittal as well as Jags gaffer Alan Archibald is available now to Jagzone subscribers. Log in now to see it.