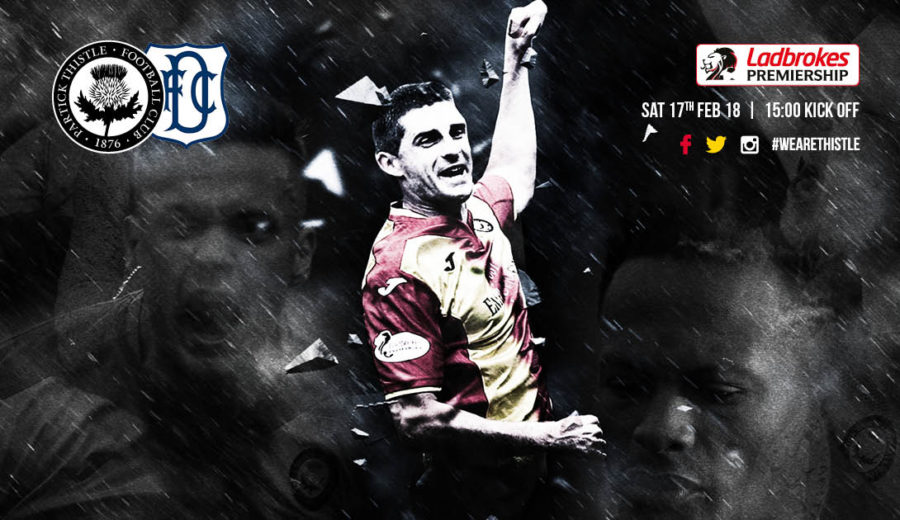 Doolan: Saturday is massive for us

Saturday’s match against Celtic saw Partick Thistle’s very own record breaker, Kris Doolan, knock another milestone down by scoring his first ever goal at Celtic Park. Although the match ultimately ended in disappointment, this weekend’s Ladbrokes Premiership clash against Dundee gives the Jags a chance to return to winning ways in a crucial clash against their close rivals from Dens Park. Kris Doolan took some time out of his pre-match preparations to speak to ptfc.co.uk about Saturday’s match, breaking records and his gaffer’s fifth anniversary.

Dools started by looking at Saturday’s game, highlighting what game plan the home side will have to adopt in order to take three points.

“We’ve got to be wary of the fact that Dundee are a side that can play good football but probably haven’t been getting the results they deserve on the park. On their day they play well, look to pass it out from the back and we need to respect that. On the flip side of that we are at home and it’s getting to the stage of the season where we’re not going to sit off teams.

“As I said, they do look to pass it out from the back and that puts the pressure on us as attacking players to go and put the pressure on early. They do it well at times but they can also leave themselves exposed and we need to look to capitalise on that, take it off them in the final third and put it away.

“You saw it on Saturday at Parkhead when we took a risk on a couple of occasions by getting bodies forward and playing up against their back line. We capitalised on a mistake and we got our first goal. We’ll need to do the same this Saturday if we are to get a positive result.”

There’s no getting away from how big a game Saturday’s match really is and, as a proverbial “six-pointer”, Kris knows just how important a good result will be.

“I think it really is a big game. We’re coming into a run of fixtures against teams that are all around about us in the table and you’ve got to be taking points off these kinds of teams. It’s the start of a massive run of games but I think even between now and the end of the season we have to have that mentality where we need to go and play right up against teams to force goals that will get us out of this position we’re in now.

“I think we have the players and the talent to really put teams under pressure but we just need to make sure we go into games with the right mentality straight from the start and all the way through to the finish. As I say, I truly believe we have it in us and we just need to apply that between now and the end of the season.”

Doolan is just one goal away from hitting 100 league goals for Partick Thistle and in doing so will become the first ever Jags player to hit that particular milestone. With nine years of service, the former Auchinleck Talbot man has a lot to be proud of from his time in red and yellow.

“It was great to score at Parkhead and tick another one off. The milestones really do mean a lot to me and it gets to that point where every time you score a goal you’re catching someone else in the charts or getting another record and every time I do that it means the world to me, it really does. There’s still lots to look forward to and hopefully a lot more games to come for me to keep breaking through those milestones.

“The big one for me now is to get that 100th league goal. It would be a massive achievement for me personally because it has never been done before, I’m really excited about it and when it does come I will be incredibly proud to add that record to the list – hopefully it comes on Saturday.”

“He’s had a huge influence on me personally and on the club. For me personally he’s a great guy and very approachable but approaches every day with the utmost professionalism. I think he’s the perfect modern manager in that respect actually. Players can go and speak to him on a personal point, get advice or even just have a chat.”

Friday marked the fifth anniversary of Alan Archibald’s first game in charge at Partick Thistle. As one of the manager’s longest serving players Doolan was keen to pay testament to his gaffer’s achievements.

“On the pitch he has developed my game a huge amount and the style of football he looks to play really suits me. He’s had massive influence in that respect right across the club and has really given Thistle teams an identity and has obviously raised the profile of the football club a huge amount. Since he has taken over I think everyone can see how the club has gone from strength to strength both on and off the pitch.

“I really don’t think his influence ends at the final whistle either, he drives off the pitch developments and works with the board to safeguard the long term future of the club. Crucially though he strikes the perfect balance by delegating effectively and letting people do their jobs. We’ve got a great team in place now and with the gaffer at the head of it I think the club is in the strongest position it has ever been for as long as I’ve been here.”

More exclusive preview interviews with Callum Booth, Mustapha Dumbuya and Jags gaffer, Alan Archibald, are now available to Jagzone subscribers – log in to see them. Jagzone members will also be able to watch highlights of the game from midnight.