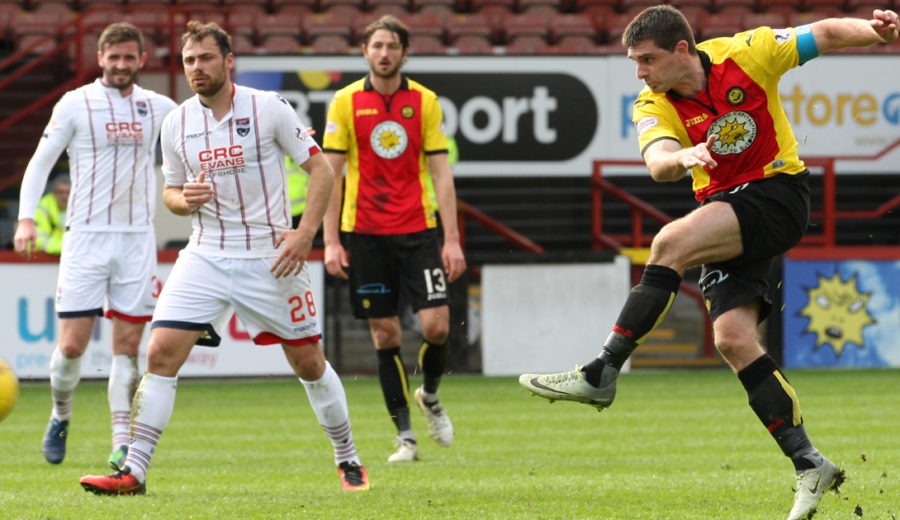 Doolan: We are in this together and it’s special.

Scoring 100 goals for the one club is extremely rare in modern football. Players frequently move about and strikers often struggle to find the consistency for such an achievement. So those inside Firhill for the match against Ross County witnessed something special and it was done by someone very special indeed.

Those that were there will remember they were there when he finally did it, the day Kris Doolan got his 100th Thistle goal, the day now dubbed April Dools Day.

It was a moment everyone has been waiting for since the start of the season and how fitting was it that Kris Doolan didn’t only get his 100th goal in Thistle colours to draw the team level against Ross County, he then got his 101st to win Thistle all three points.

It’s like something from a movie, the boy plucked from the juniors who goes on to score 100 goals, become the top league goal scorer of all time and while the word might be thrown about too easily these days, become a true Partick Thistle legend.

He may have been a man in demand after the game, his moment in the spotlight. Having interviews with everyone imaginable, pictures to be taken, autographs to sign and man of the match awards to be collected but you could tell he loved every minute, you couldn’t wipe the smile off Kris Doolan’s face as he spoke to ptfc.co.uk about his special day.

He said: “It’s a dream come true, especially to do it here at Firhill. To do it in front of these home fans makes it even more special, to then go on and win the game just makes it even more memorable. To do it wearing the captain’s armband was even more perfect. It’s a day I will never forget.”

There was always the fear the 100th goal would be a consolation in a defeat but Dools was never going to let that happen, he knew it had to mean something to the team.

“I was always in my mind that the 100th goal would be a winning goal because then it means something. It was the equaliser today but it helped turn things around. I’m glad it was me that got the next one too that turned out to be the winner.”

The goals came against a familiar face in former Jag Scott Fox but Kris wasn’t bother who the tally was reached against.

“Foxy came up to me at the end and congratulated me, he joked that I just had to do it against him. It didn’t matter who it was against though, just being at home was the main thing for me.”

Some fans may have labelled ref Willie Collum a spoilsport for booking Dools for revealing a top saying ‘100 and counting’ after the goal but Kris was more than happy to take the booking.

“I said to the ref ‘I really don’t care Willie, you can book me if you want. This top was coming off no matter what’. I’ll take the booking all day long, it doesn’t make a difference to me.”

The 100 goals landmark has been on everyone’s lips for a while now but Kris admits he only got the t-shirt made up more recently, for fear of jinxing things.

“It’s been on for the last couple of games, I got to 99 before I got it made up because I didn’t want to jinx it”

In true Kris Doolan style, he was quick to turn things round and talk about the team, and how important the goals are for everyone.

“The big thing was the three points, we extended the lead in sixth and have given ourselves a right good chance. We’ve put the pressure on the teams around us to have to come out and take points. We can’t relax now, we have to go out and get over the line.”

The 100th goal was obviously very special for Dools and a day that will live with him forever but he hopes for more special memories for the club as the season draws to a close.

“Getting that top six would make things even more special. It’s all about making memories, making 100 goals, winning games like this and getting into the top six are all massive for the club, they are all big achievements and things we are all pulling together to achieve.

“We are in this together and it’s special.”

A Kris Doolan special is now available to view on Jagzone. Log in now to see it.