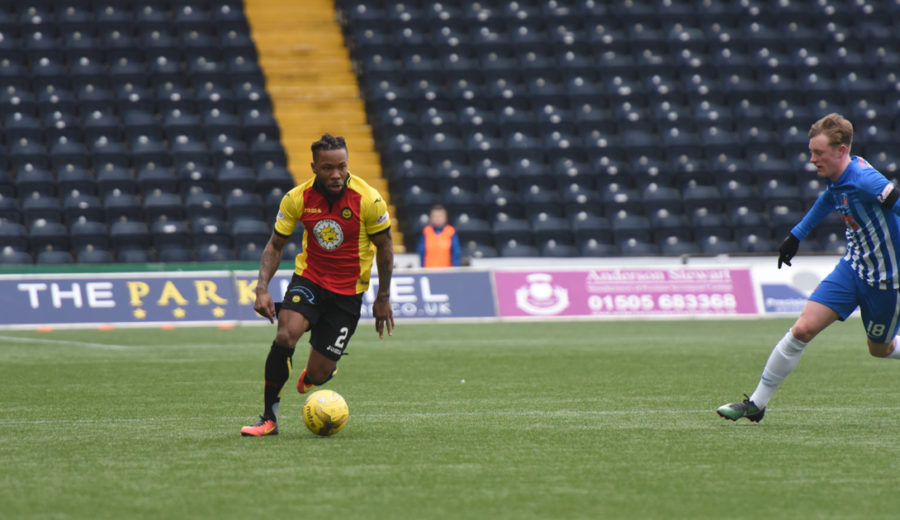 Mustapha Dumbuya put in another flying shift at right back for Thistle on Saturday afternoon at Rugby Park. The Jags number two rampaged up and down the right touchline throughout the ninety minutes as Thistle drew 1-1 with Kilmarnock in the Ladbrokes Premiership clash. Ptfc.co.uk caught up with Muzzy on the team bus back to Glasgow to get his thoughts on the game.

“I don’t even have the words to be honest. I thought we were outstanding in the second half. In the first half we kinda rode the first twenty minutes. They came out guns blazing but I thought we handled it really well. After that 20 minutes I thought we were the better side for an hour. It’s happened again and it’s difficult to take. We’ve got to learn.”

Kilmarnock’s goal came from a Jags mistake with the usually excellent Tomas Cerny unable to keep out Sammon’s effort. Dumbuya felt a lot of sympathy for the Czech goalkeeper.

“Yeah, of course. These things happen. We all make mistakes now and then. It’s just a shame that we’ve made a mistake in such an important game and that it was Tam. Tam’s been fantastic for us. He’s saved us so many times this season and last season.

“Sometimes you just need that a bit of luck. We had so many chances that we could have been 3-0 up but these things happen.”

Thistle remain in sixth place with only four games to go until the split and the sides top six fate lies in their own hands.

“We’re sixth at the moment. As long as we stay sixth, it’s always going to be in our hands.

“I think that’s going to be the decider for us against Ross County. Win that and I think we can push on. As we said we’ve got a few knocks at the moment, a few of the boys are playing on injuries and hopefully this international break gives us the time and the break to recuperate and get back fit.”

Having started his season six months later than the rest of the squad, Dumbuya feels every 90 minutes in his legs, but is loving being back in the side.

“It’s been good and I think I’ve been managing it really well but I think these two weeks are going to do me some real justice and get a little rest to be ready for the end of the season.”

More reaction is available from Abdul Osman and Christie Elliott on Jagzone. Log in now to see it.