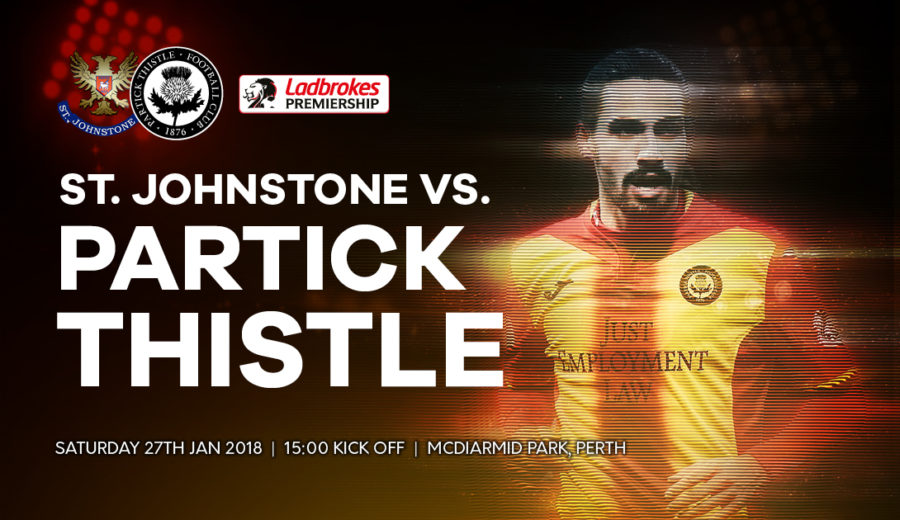 Edwards looking for an away win

Ryan Edwards is looking forward to the trip to face St Johnstone as Thistle look to win their first away league game of the season.

The Jags have already won at McDiarmid Park earlier in the season in the Betfred Cup and Edwards is hoping to add a league win to that on Saturday.

Speaking to ptfc.co.uk he said: “We’re looking forward to the game.  We have a good record at McDiarmid Park and we feel confident that we can get a positive result.

“We are coming off the back of a number of good results in December and after a good performance against Celtic. Although we didn’t manage to take anything from the game we have a lot of positives to take from the performance and the way we played”

Edwards admits the game against St Johnstone will be totally different but is hoping to build on the positives from the slim midweek defeat.

“We had a game plan against Celtic to press them high and cause them some problems when we could. It worked in the first half and we went in ahead. Celtic showed in the second half how good a team they were but we stayed in the game and could have easily taken something from the game.

“If we can perform the same way on Saturday as a unit then we will do very well, it will be a completely different game but we take the defensive fight and energy into the game and try and be a bit better on the ball and look to take all three points.”

The last three league games between the sides have finished 1-0, with five from the last seven being settled by a single goal. Edwards knows the thin margins involved and how important starting well is.

Ryan knows the away form needs to improve and he feels a visit to a stadium where we’ve enjoyed a lot of success in the last few years is the best place to start.

“We need to improve our away form. Our home form has been much better but our away form still isn’t good enough. When we went on our good run after the break last year we improved a lot away from home. It made such a different and if we can start picking up some points away from home it can be vital.

“We have already won in Perth this season so hopefully we will be able to do the same, after winning last week away in the cup, we can hopefully add our first away win in the league.”

Due to postponements St Johnstone haven’t played since before the winter break while Thistle have already played twice. The Thistle number nineteen is hoping the match sharpness can help Thistle end victorious.

“We’ve had the two games now, a good performance against Celtic and a result in the cup away to Queen of the South. We hope it will be a positive that we’ve managed to get a bit of match fitness after the winter break. We’ve had players come back who have managed to get some much needed game time in those games.

“St Johnstone hasn’t played since last year so they might feel fresh but hopefully they won’t quite have that match sharpness and fitness.”

The winter break has allowed a number of players to come back from injury and Ryan feels it’s given the entire place a boost watching them come back into the team.

“It’s a big positive having a number of players back from injury. Psychologically it’s great for us to have some big players back and it’s a good headache for the manager to have. We’ve now got a lot of competition for places which drive everyone on. Training is of such a high standard with everyone really pushing for their place in the squad.

“I think we’ve shown in the last two games how much of a positive it is for us having these players back and hopefully they continue to make an impact.”

Earlier in the season Edwards produced a thunderbolt into the top corner and the midfielder is hoping for more of the same.

“I managed to get a goal against St Johnstone earlier in the season, I would be delighted to do the same on Saturday but it’s all about the three points and I just hope to help the team and if I can do that with a goal even better.

“Tuesday was the first time in a while I had played behind the striker so hopefully I get more opportunity and can try and bag some more goals or assists.”

More exclusive preview interviews with Tomáš Černý , Andrew McCarthy and Jags gaffer, Alan Archibald, are now available to Jagzone subscribers – log in to see them. Jagzone members will also be able to watch highlights of the game.