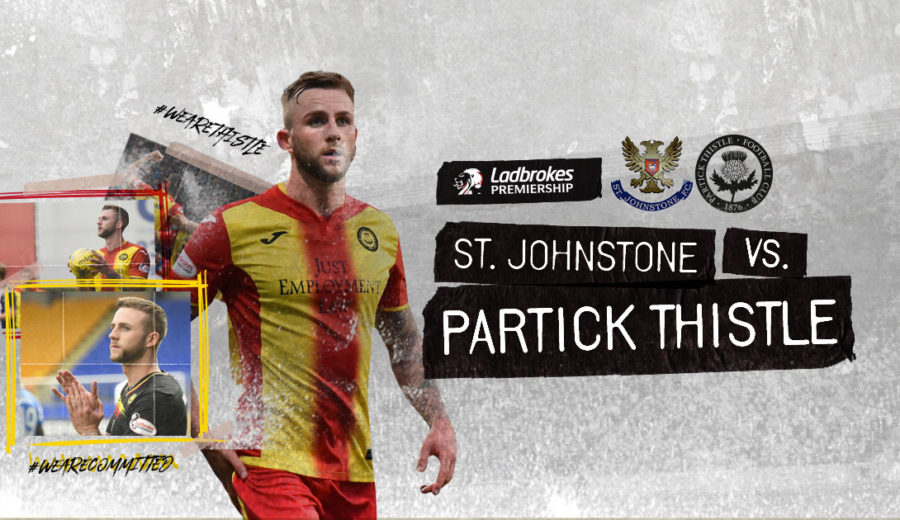 Christie Elliott is hoping for a repeat of the Betfred cup result as Thistle travel to Perth for the second time in three games.

The Jags recorded a 3-0 victory last time out and despite suffering a 1-0 defeat at the hands of Celtic on Friday night, Elliott says that confidence is high in the camp

Speaking to ptfc.co.uk he said: “We are going into the game confident and feeling like we can win the game. We were disappointed not to take anything from the Celtic game but we were happy with the way we played and feel there is a lot of positives to take into this game.

“We played St Johnstone before that up there and we take a lot from that game and there is no reason we can’t go back and put in a similar performance.”

The Betfred cup tie was a very good night for Thistle although Christie admits the end result maybe flattered Thistle a little and he expects a much closer game this time.

“It possibly wasn’t a 3-0 game but we deserved the victory. We will know it will be a tough match, games between us are always close and whoever scores first usually goes on to win the match. So it’s important we start the game well and get that first goal.

“We have a good record at McDiarmid Park in the last couple of season, it helps us going out there, when you have good memories of the place then it can help you through and gives you a good feeling. Hopefully we can take that into Saturday and put in a performance.”

The Thistle fourteen is hoping to get some points on the board. After two very tough matches The Jags still have to register their first points of the season.

“We want to get points on the board as early as we can, in previous seasons we’ve started slowly and it’s put us under pressure to pick up points towards the end of the season. We know we’ve had a tough start with fixtures but we need to get that win on the board and go from there.

“St Johnstone have had a good start in the league, they are sitting top of the table. As a defender it will be important for me to keep things tight at the back and give us as good a chance as possible to win the game. We have quality up top in the team and they will create chances so if they can take them and we do our job at the back then it can be a good afternoon.”

Elliott came to the club as a striker but has developed into an extremely competent full back and it’s a position he is enjoying and feels he is improving every game.

“I’m enjoying trying to make the full back position my own. I’ve had a good run there and the more you play there the more you will improve and learn and understand the position more and I feel I’m doing that. Hopefully I can lock down the position and continue to improve there.

“It would be good to add a few more goals to my game this season. I know it’s something I need to improve on, I get myself in position and need to do better. It was good to get my first goal in a while against Stranraer and I want to get more. It’s good I’m still able to get in those positions and I just need to take the chances.

“If I can do that and add some more assists then I’ll be happy, I want to continue developing and improving. It’s good the way the gaffer wants us to play it allows me to get forward. The gaffer likes us to get forward and help create up the pitch as well as making sure we defend at the other end.”

An exclusive preview interview with Ryan Edwards and Niall Keown as well as Jags gaffer, Alan Archibald are now available to Jagzone subscribers – log in now to see them.

Can’t make it to McDiarmid Park? Jagzone members can listen to live audio commentary of the match. JagZoneLIVE begins at 2:30pm on Saturday.

Christie has committed, will you join him? 2017/18 season tickets are still on sale.