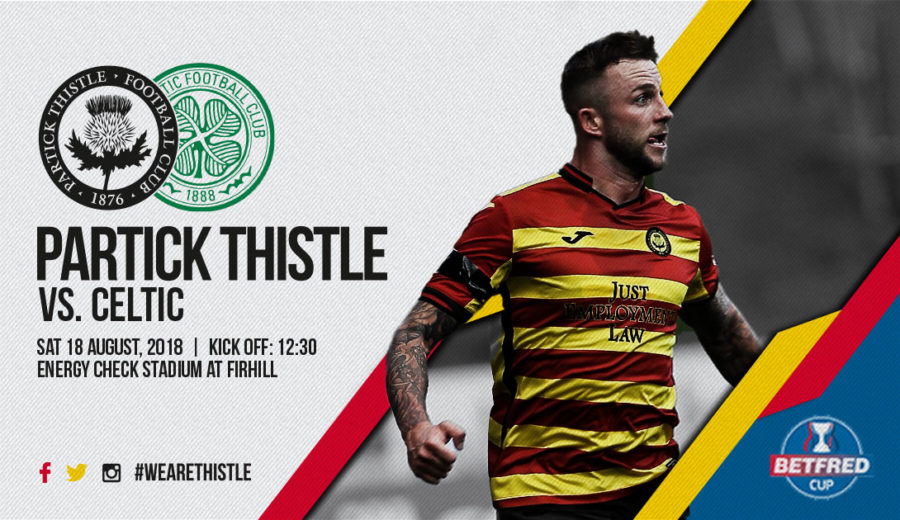 With the first league win now under their belts and a confidence boosting victory over Stranraer on Tuesday night, the mood in the Jags camp is good as they prepare to face Celtic in the second round of the Betfred Cup. Christie Elliott has an extra reason to have a spring in his step as he was last week named team captain by gaffer, Alan Archibald.

As Christie and his teammates prepare to take on Celtic in front of the BT Sport cameras Christie took the time to speak to ptfc.co.uk about how much the armband means to him.

Christie said: “It was a really proud moment for me to lead the team out. Since I’ve been here I’ve loved the club and what an honour it was to be asked to lead the team. Thistle has become my second home and it was a privilege to be skipper last week and wear that armband.

“It’s a massive responsibility, I’ve always tried to help other players and help drive them on, talk to them and pick them up if they make a mistake. I’m always in early trying to work hard and try and help some of the younger lads and help them with their game and hopefully I can bring that to the role of team captain this season.”

Elliott, in his eighth season as a Jag, has been on quite the adventure since he came up to Scotland from Newcastle as a fresh faced forward and he can’t quite believe the journey.

“If you had told me that from the moment I came in here as a young striker to be where I’m playing today and leading the team out I wouldn’t have believed you. It’s been a lot of hard work and there’s been a lot of players in that time but it’s always been a good squad and we’ve helped each other to improve.

“We’ve got another good group of lads this season and we are all pulling in the one direction so hopefully we can make this season another highlight to look back on from my time here.”

Two victories in a row will always bring with it a boost and Christie has certainly seen the impact this week.

“It was good to bounce back after the last two poor results and the two wins have generated a lot of positivity around the players. That gives us something to build on now. You can tell we’ve had a good week’s training and we need to take that into Saturday, play with confidence and belief and show what we can do.

“Everyone all over the pitch will need to fight for every ball and work hard from the first minute to the last in order to get the result against Celtic but it is possible. We have to start well and if we can give ourselves a platform to build on then we have a real chance.”

More exclusive preview interviews with James Penrice and Jags gaffer, Alan Archibald, are available to Jagzone subscribers – log in now to see them.

Can’t make it to The Energy Check Stadium at Firhill? Jagzone members can listen to live audio commentary of the match. JagZoneLIVE begins at 12:15pm on Saturday.