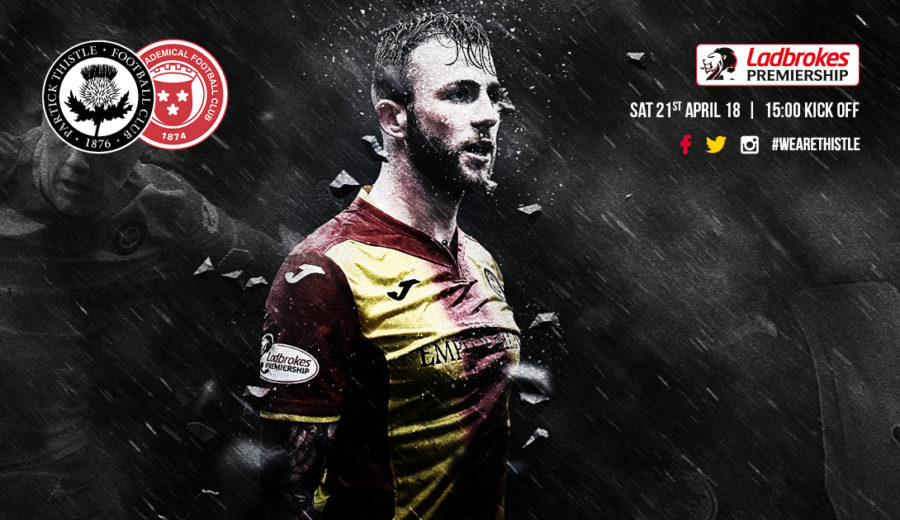 Elliott urges fans to stick together

Christie Elliott has urged the Thistle support to stick by the team as they prepare to battle for their Ladbrokes Premiership place.

Now in the split portion of the league, with five games left against those in and around us, Elliott knows togetherness and unity are vital.

Speaking to PTFC.co.uk he said: “We need the fans behind us, we need their support. We know it’s not been a good season, we know it’s been difficult for all the fans, but the only way we will get out of this is by sticking together. Fans, players, the manager and staff.

“Togetherness is massive and if the fans are behind us it’s huge. They have always been great to us and we’ve shown in previous seasons how much togetherness can help. We need it more than ever now.

“Everyone wants the same thing, the entire squad are pushing in the same direction, we want the same as every fan in the stands”

Elliott knows, however, the players have to repay the fans with effort and fight with each game getting more important than the last.

“We have to give 100%, we have to stick together and get out of this together as a team. We have to fight for everything and show how much we care, because we do, we all want to get out of the position we are in.

“We have to treat these five games as a mini league. We have to put the season so far out our minds, it’s been terrible but we have games starting against Hamilton to put things right and do what we need to do.”

Christie knows how important Saturday’s match is and knows the players need to go out and give everything.

“It’s a massive game, we all know that. We have five huge games coming up and Saturday is big.

“It’s important we get onto a run straight away and beating Hamilton really brings us back into reach of the teams above us. It brings us within 2 points of them.

“We have five cup finals coming up, we have to treat them like that. We know we can win each one but only if we go out and play and put everything into winning the games.

Elliott knows the season hasn’t been good enough but believes the players are good enough, but only if they show it on the park.

“We feel we are good enough to stay in this league. We feel the squad is good enough and we have shown in previous seasons we are.

“It’s not been a good season we know that but we have to go out now and show that we are good enough to stay in this league. We believe we can and we have to earn the right to stay in the league.”

The full back spent much of the season injured but he’s delighted to be back for the fight to stay up.

“It was frustrating being injured, especially when the team wasn’t doing well and you can’t do anything to help but I’m glad to be back now in the team and hopefully able to help between now and the end of the season keep us in the league. “

More exclusive preview interviews with Steven Lawless, Conor Sammon and Jags gaffer, Alan Archibald, are now available to Jagzone subscribers – log in to see them. Jagzone members will also be able to watch highlights of the game.