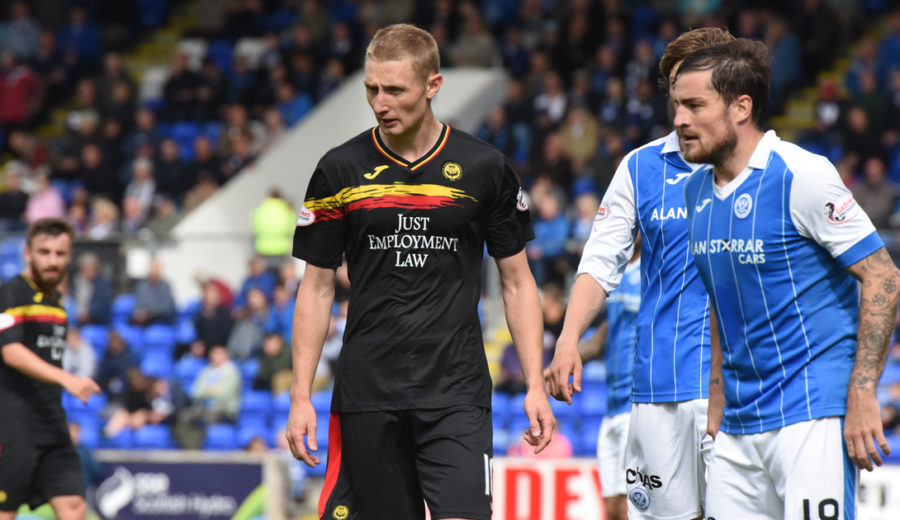 After two defeats to start the league season, Partick Thistle travelled to Perth on Saturday to take on St. Johnstone. Ten days prior, the Jags had won 3-0 at McDiarmid Park in the Betfred Cup so there was hope that they could repeat the feat and grab their first points of the season. Unfortunately, Thistle fell to another Ladbrokes Premiership defeat as St.  Johnstone edged the Firhill side out 1-0. Michael O’Halloran’s first half goal was enough to separate the sides as the travelling Jags had no response. Thistle midfielder, Chris Erskine, spoke to ptfc.co.uk after the game.

Chris thought that the side were off the pace during the ninety minutes and didn’t perform to their full potential in Perth.

“We didn’t play anywhere near well enough and got sucked into their style of play. We were kicking too many long balls and didn’t get our passing going. In the end, we probably got what we deserved.”

As a creative attacking player, Chris wasn’t allowed any opportunities to perform in a scrappy game which was very frustrating for the number 10.

“We didn’t get the ball down much which made it difficult for me to make a difference. We struggled to create chances in any way, whether it was through me, Stevie Lawless, Ryan Edwards or anyone else.”

In the two sides’ last meeting, Kevin Nisbet played up front as the Jags won 3-0. His hold-up play was key to Thistle’s play. Today, Miles Storey started and he is a very different striker who is more about pace and making runs so Chris reckons that Miles was maybe less suited to the scrappy match than a hold-up player might have been.

“I do think it might have suited someone that holds the ball up but that’s mostly because we let them impose their style of play on us and we didn’t get the ball down. Miles brings something different and we didn’t play to his strengths. We should have got the ball in behind a bit more but a lot of our play was fairly aimless, in my opinion.”

The aforementioned Storey was making his first Thistle start today and Chris thinks that it was something of a baptism of fire as Miles struggled in the long-ball environment of the match.

“We didn’t get the ball to his feet enough. We know the type of player he is he likes to run with the ball and get in behind which we’ve seen when he was with Inverness and a bit during his time at Aberdeen. He’s got pace but can finish as well so although today wasn’t his sort of game, he’ll no doubt be an asset to the squad going forward.”

When both in the team, Chris Erskine and Kris Doolan often showcase an almost telepathic understanding that allows them to link up in the final third. The attacking midfielder, Erskine admits that it will take time until he and Miles Storey can boast a similar partnership.

“I’ve not had too much time to work with Miles as yet. He’s just finished his first week of training so he’s still settling in to an extent. He’s different to any other striker at the club so I need a bit of time to properly get on the same wavelength as him but hopefully we can find that understanding soon enough.”

For a third consecutive year, Thistle are struggling at the start of the season. A difficult opening six games have made it even more difficult than usual to begin the campaign well but Chris doesn’t think that it will play on the squad’s mind too much going forward.

“I don’t think it will affect the mentality among the boys. Obviously, it’s not an ideal situation to be in but we’ve been here before. We talked about it in pre-season but the way the fixtures have come out, it’s a really hard start. We went to a good Hibs side on their top flight return then played an exceptional Celtic side and now we’ve been to St. Johnstone and they’ve played well enough to edge us out. Hopefully, being near the bottom of the table will motivate the boys and we can climb the positions.”

Although, Thistle are struggling in the league at the moment, Chris thinks that the team must still go into next week’s meeting with Aberdeen expecting to get something.

“We have to go into every game believing that we can take, at the very least, a point. We know the threat that Aberdeen possess and they represent a very different challenge to what we faced today. I’m sure we’ll look at the footage from today and work towards a much improved performance against Aberdeen.”

As Chris mentioned, Thistle next game comes against Aberdeen at Firhill. The match takes place next Saturday and kick-off is at 15:00.

More reaction from Abdul Osman and Miles Storey as well as Jags gaffer Alan
Archibald is available now to Jagzone subscribers. Log in now to see it.

Article Copyright © 2017. Permission to use quotations from this article online is only granted subject to appropriate source credit and hyperlink to  ptfc.co.uk