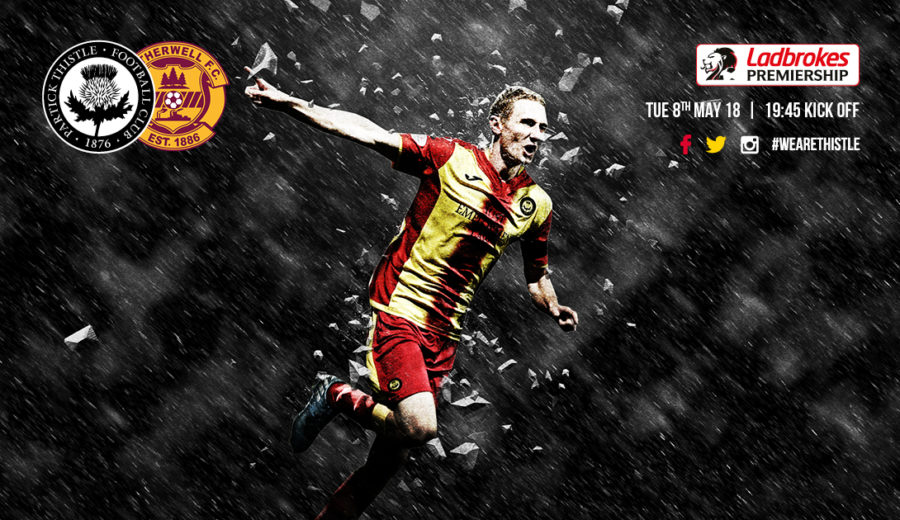 Erskine promises his all

Chris Erskine has promised to give his all as Thistle go into the final two games of the season still hoping to get the required points to stay in the division.

Erskine opened the scoring on Friday night but it wasn’t enough as Thistle had to settle for a point against Ross County.

Thistle go into the game against Motherwell now knowing a win is required to keep up hopes of getting out the bottom two places.

Speaking to ptfc.co.uk Chris said: “We all know it’s a must win if there’s any chance of us avoiding the play offs and finishing in 10th.

“We were disappointed that we didn’t pick up all three points against Ross County. We have stopped getting beat in the last few games but we only have two games left now and we have to win them if we are to make sure we stay in this division.”

As the season reaches its climax the midfielder knows every last ounce of effort has to go into this next week.

“We’ve got a week left, we will throw everything at it, we have two games to save ourselves, we know we have to leave everything out on the pitch. It’s good that these last three have been so close, we will go out and give it our all.”

Motherwell are on the back of a heavy defeat and will be looking to bounce back and Erskine knows we must guard against that.

“Motherwell will try and bounce back from their result at the weekend and we need to be careful and look out for that. They don’t have much to play for in terms of the league but they have the cup final coming up and they will all be fighting for places in that.

“We have to start brightly and be positive, we can’t allow them to get back into their stride and get their confidence up early. We need to go out and look to score the first goal.”

The Thistle number ten has looked dangerous in the last couple of games and got the goal on Friday, he wants to continue playing his part in the push for safety.

“We’ve looked much more dangerous in these last few games, that’s our strength, going forward and attacking teams. We looked dangerous the other night with Dools and Conor up top and it left space for me to try and get in from behind. We caused them problems and obviously got the goal.

“I’ve found myself in some good spaces in the last few games, I was happy with my one the other night and hopefully I can get some more before the end of the season. I would love nothing more than to do my part in keeping this club in the league.”

The fans played their part on Friday night with another superb atmosphere and Squiddy is hoping for more of the same on Tuesday.

“The fans have been fantastic, yet again on Friday they really backed us and I’m sure they will again on Tuesday. They have been great all season, they really have. Especially with what they’ve had to endure and put up with. If they can get behind us with more of the same it really will help the team.”

While avoiding bottom is in our hands, help will be needed to avoid 11th but Chris knows we have to do our bit first.

“We have to concentrate on our own games, we have to go out and look to win both games and whatever happens elsewhere will happen. We know if we win both games the worst we will get is the play offs but we want to get to 10th and the only way we will have any chance is going out and winning our games.”

More exclusive preview interviews with Daniel Devine and Jags gaffer, Alan Archibald, are now available to Jagzone subscribers – log in to see them. Jagzone members will also be able to watch highlights of the game.