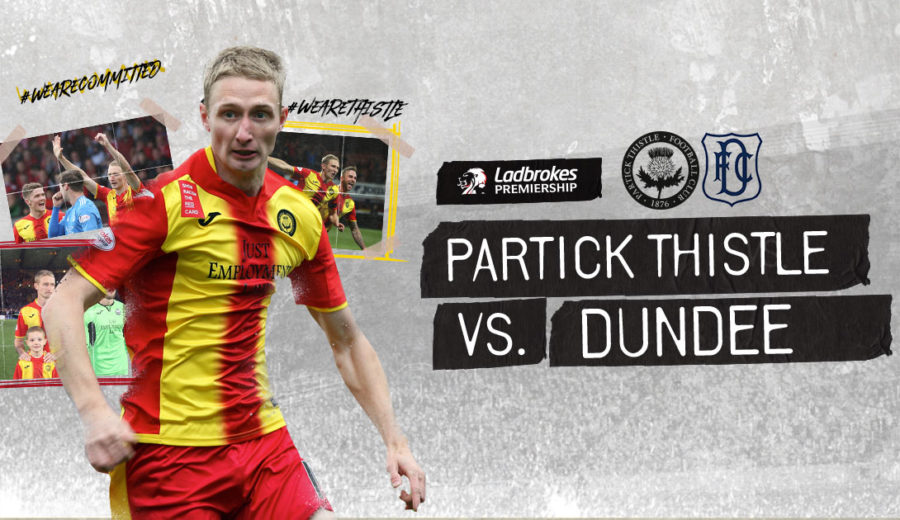 Chris Erskine has urged the Thistle support to stick behind the team as they look to record their first win of the season against Dundee on Saturday.

The attacker is hoping the fans support can help them finally kick start the season and he admits it’s important everyone sticks together.

He said: “It’s really important the fans stay behind us. It’s frustrating for them the way things have went, they’ve always stuck by us but we need them now more than ever. We want to reward them with a win. It really does help when we are at home and the fans are right behind us.

“Sticking together is the important thing right now. I think when times are tough it’s important everyone keeps a cool head and stays calm. We are all working for the same goal and we are working hard towards that together.

“It’s a massive game, every game that comes up just now is massive due to where we are in the league. We’ve not been getting results and that makes every game even bigger.

“Despite the results we have had the mood in the camp is good. We are all desperate for that first win to kick off the season and have been working hard towards that.

“We feel we have a good squad, we know we have good players, it’s the best squad we have had since I came to the club. Teams go through bad spells where they have bad runs and I think the important thing is to get yourself out of that as soon as possible. Once you are in the routine of not winning games it makes it harder and harder so we need to get ourselves out that.”

Chris knows the result against Kilmarnock was disappointing but will use that to learn from and feels it’s important to look forward.

“You can’t just forget about the bad results but you have to learn from them and focus on what’s in front of us. That’s Dundee and hopefully we can get the three points and go from there.

“No one likes losing matches and we don’t want to feel like this after matches. We want that winning feeling back because it lifts everyone. We had a tough start to the league but we are in a run of games now where we need to start picking up points and lifting ourselves off the bottom of the table. We don’t want to get stranded there.”

Despite wanting to play good football the Thistle number 10 will take any win at all, no matter how it arrives.

“We want to play good football, we want to pass the ball and entertain but I think when you are in the position we are that goes out the window and you just want to win football matches however you can. It’s all about the result, I’m sure if we play badly and get the three points everyone will be happy.”

Last season with Thistle in a similar position a win at Dundee kickstarted the season and now Chris is hoping history repeats itself.

“We went to Dundee last season and kick started our season with a result against Dundee and we want to do the same this season, it’s funny how these things happen and hopefully history can repeat itself.”

More exclusive preview interviews with Kris Doolan and Steven Lawless as well as Jags gaffer, Alan Archibald are now available to Jagzone subscribers – log in now to see them. Jagzone members will also be able to watch highlights of the game from midnight.