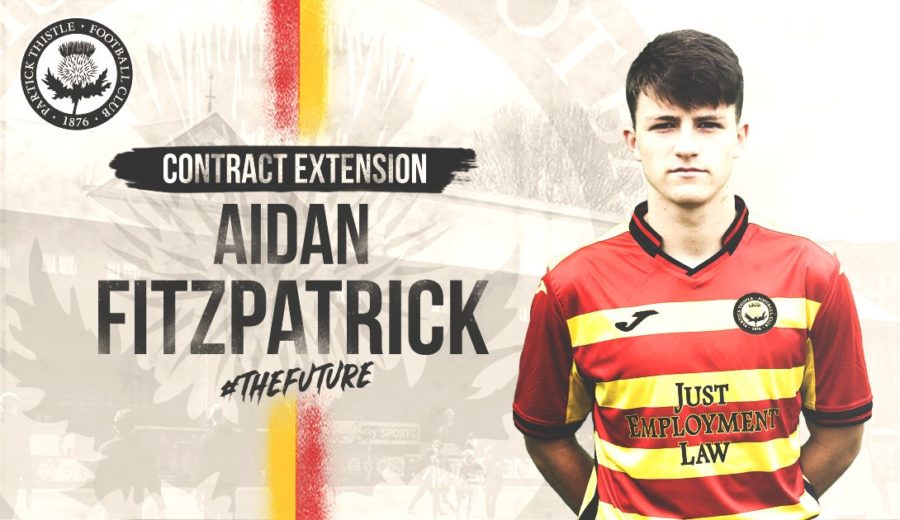 Aidan Fitzpatrick today signed a contract extension that will see him remain at the Club until May 2021.

The 17 year old first signed a full time contract with the Jags in May 2017 having made an excellent reputation for himself on his journey through the ranks of the Thistle Weir Youth Academy.

Upon arriving back for pre-season training in 2018, Aidan set about making his impact on the first team. After impressing in a series of pre-season matches, Aidan was handed his Jags debut in the third Betfred Cup group match of the campaign – becoming the first player born after 2000 to feature for the Jags in the process. Within minutes of taking to the pitch he found the back of the net with a well-executed finish to seal a win against Albion Rovers.

After being handed his first ever start against Stranraer in the Irn Bru Cup Aidan was the star of the show with two goals, an assist and a Player of the Round award to his name by the time the draw was made for the next round.

With three Scotland caps already to his name, Aidan has a big future ahead of him and will no doubt prove an exciting player to watch this season.

On signing his deal, Aidan said: “It’s fantastic to sign an extension with Thistle and I’m really looking forward to playing as much as I possibly can this season. The coaches and staff from the Academy to the Club have been fantastic with me ever since I first walked in as an 11 year old. If I can repay any of that investment with my performances on the pitch then I’ll be happy.

“Right now though, I know I just need to focus on playing football. I’m still young and I know I’ve got a lot to learn but I will be doing everything I can to make a positive contribution to this season’s Ladbrokes Championship campaign.”