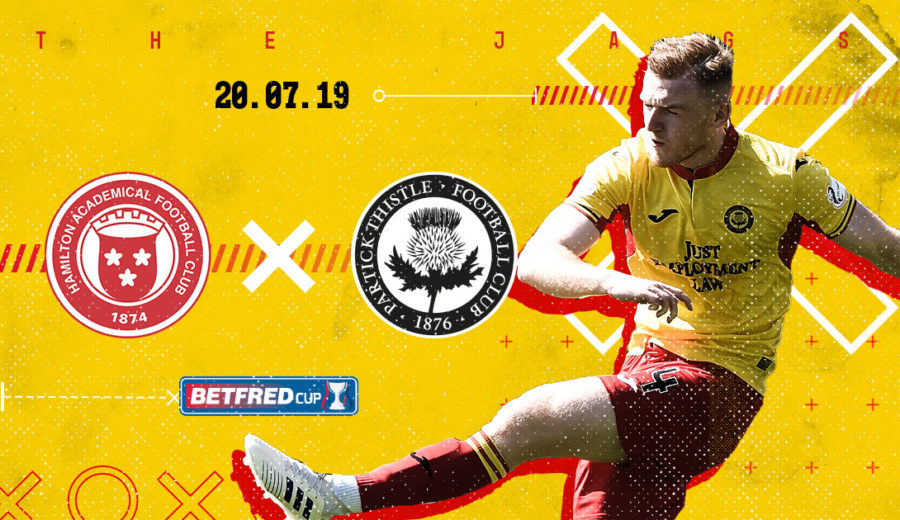 Shea Gordon is hoping to continue the winning momentum as Thistle travel to face Hamilton Accies in the third Betfred Cup tie of the season.

With two wins from two another victory would see Thistle take a major step towards qualification. Gordon is looking forward to facing the Ladbrokes Premiership side in search of another win, however, he knows performances have to get better.

Speaking to ptfc.co.uk he said: “Getting two wins is a good start so far but we know performances so far aren’t where we want them to be. We know we aren’t quite there yet but we’ve got the wins we wanted and that’s a big factor. It puts us in a good position and we are looking forward to facing Hamilton Accies on Saturday.

“The message this week has been focused on how much of a chance we have to take a big step towards qualification for the next round of the competition. We know a win strengthens our position at the top of the group and progressing in this competition will give us a big platform for the start of the league campaign. A good run in the group really give us a lot of momentum which is important.”

Gary Caldwell has been quick to highlight that certain aspects of Thistle’s performances have not been up to scratch, but Shea admits the trait of winning ugly will be one they’ll need to use at points throughout the league campaign.

“The manager has tried to install a winning mentality in the squad and, although the performances haven’t been there all of the time, if we can grind out twenty of those results during the season then we will be happy.

“I think as we move towards the league campaign starting we will improve and that is when we will start to come good. We have tried a few things which maybe haven’t come off yet but we’ll continue to work and winning ugly sometimes isn’t a bad habit to have.”

The premiership side drew their opening game against queen’s Park before losing on penalties but the Thistle number 14 is expecting a tough match.

“We know the threat Hamilton pose, they are in the league above and on paper it’s the hardest game we face in the competition. Having said that it’s one we feel confident going into. Queen’s Park beat them on penalties so we know it can be done but only if we go and play well and do what is required.

“It’s always tough going to their place with the artificial pitch but we’ll go out and look to make a statement and really show what we can do.”

Gordon has started both games, playing in slightly different positions in each. He knows there are still relationships to be formed with a lot of new faces coming into the team.

“I’ve played in two slightly different roles and it’s just about getting used to different relationships with some new players and working on combinations and how they like to play. We are working hard on that in training though and that should improve as everyone gels. We’re all confident that we’ll start seeing things coming off and everyone working as one.”

Gordon ended last season very well after a period out through injury and he is hoping to start this season as he means to go on.

“I didn’t want last season to end, the way I finished the season I wanted to keep going but the rest was good and I’ve come back energised and raring to go. I’m looking to start where I left off really and hopefully I can do that. I want to put a marker down and go from there and continue to improve and help the team win as many games as possible.”

Can’t make it to the Foys Stadium? Jagzone members can listen to live audio commentary of the match. JagZoneLIVE begins at 2:45pm tomorrow.