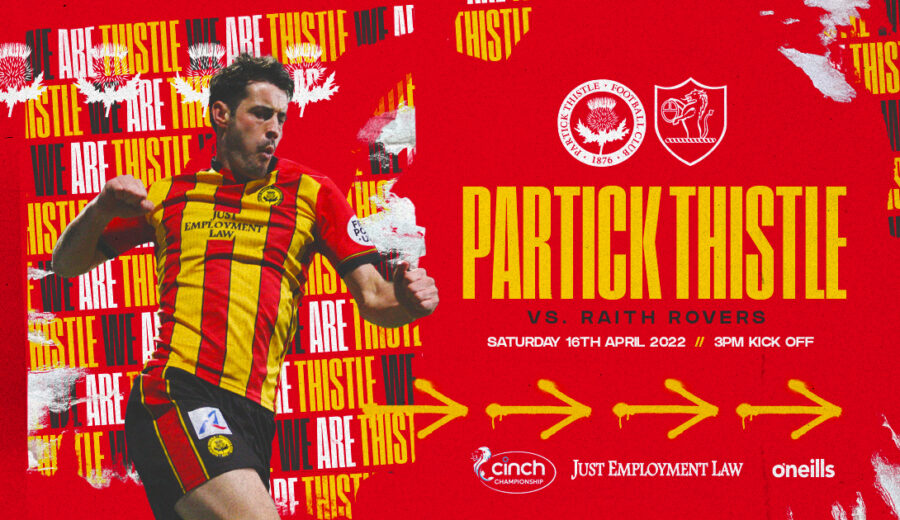 Following a hard fought win against Queen of the South last Friday night, Thistle return home to Firhill for their next league game against Raith Rovers knowing a victory would book their spot in the promotion play-offs. Thistle forward Brian Graham sat down with ptfc.co.uk to share his thoughts ahead of the crucial cinch Championship fixture:

“We’re in good confidence going into the game. I didn’t think we played very well on Friday night but who cares really when you get the win anyway? It’s the business end of the season – it’s not about playing well and looking pretty; it’s about getting three points and as a team we did that.

“We found a way to win and that’s the most important thing because it gives us a six point gap with three games to go as we look to secure the playoffs. Raith Rovers need to come here and try to beat us now so it should be an open game where both teams will be trying to win it.”

A number of Jags have returned from injury over the past few weeks and Brian reckons that the effect of that has been obvious in the last couple of games.

“I thought we were better against Arbroath and we probably should have won that game then I felt as though on Friday night we didn’t create nearly enough. We got into some good positions but our final ball at times needs to be better if we want to try and score goals.

“You can hold the ball up and bring it into play but realistically as a striker you want to be getting in the box and getting found, so as a team we need to create more opportunities for the team to score. The last game we won 1-0 but we want to be winning with a more comfortable margin so the game is not so nervy near the end.”

Brian stated that even if Thistle are able to confirm their place in the play-offs this weekend, they won’t be sleepwalking through the final two games of the season against Dunfermline and Ayr United.

“That’s not how we are as a team. If we can get fourth place sorted this Saturday then we want to try for third because we know it brings in more revenue for the club. Obviously first and second are fighting it out to try and win the league but if we can beat Raith Rovers on Saturday we know that we will probably be playing Inverness in the playoffs but we want to try and finish above them.

“We’ve got a job to do this weekend first though. Raith are a team who have a lot of quality and they won a cup a couple of weeks ago so it won’t be easy.”

Although Inverness sit a point clear of the Maryhill men with a game in hand, the number nine feels catching them is a possibility.

“Of course it’s a realistic goal. Inverness have a tough game on Friday night against Kilmarnock where Arbroath will be praying that Inverness win, and we’ll be hoping for a Killie win. We’ve got three games to go, they are a point ahead of us so it’s something we’re aiming for. The playoffs are a long slog but first and foremost we need to get ourselves there.”

Exclusive video interviews with Lewis Mayo and Thistle assistant manager Alan Archibald will be available for JagZone subscribers to watch today – log in to view.

We will be providing a pay-per-view option, priced at £12, for any supporter who wishes to watch our livestream of the match – click here to purchase.