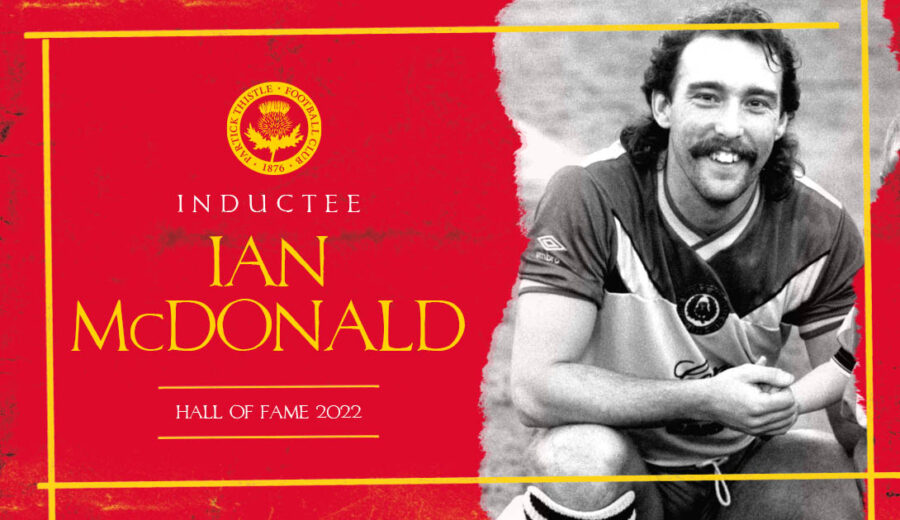 Hall of Fame 2022: Ian McDonald to be inducted

In the modern game, it is rare to see players remain at a single club for more than a few years. Throughout the history of Partick Thistle Football Club, there have been players who have spent the entirety of the career in the red and yellow of the Jags. With almost 14 years of service Ian McDonald is a prime example of a generational player who would stay with a Club through thick and thin giving their all to the cause.

Signed as a 16 year old, Ian netted on his Thistle debut in a friendly away to Ross County during a highland tour for Bertie Auld’s Jags. A debut, appearing as a substitute on the opening day of the 1976/77 Premier Division season would be as good as it got for Ian in his first campaign as a Jag. Indeed, Ian would spend the first number of years at Thistle as he learning his trade in the reserve side. With just two substitute slots available for the bench, breaking through as a young player, in an extremely competitive Premier Division was always a tough ask.

By the end of the decade, Ian had shown versatility in the middle of the park and started to earn opportunities in the first team environment. He played his part in maintaining Thistle’s Premier Division status for two seasons but, unfortunately, in the summer of 1982 Thistle fell through the trapdoor to the First Division.

Ian was a consistent selection in the Thistle side throughout the 1980s and was as committed as ever to success in red and yellow as the side challenged for promotion. After two near misses to get back to the top flight, change came to Firhill as times got tough. Ian left the club to join Motherwell but after just six months he was back in Maryhill.

Returning to a side that was struggling to threaten the promotion spots, Ian continued to give everything he had. As a creative midfield player looking to fashion opportunities in front of goal, he would provide moments of positive play during games where Thistle were toiling and the Firhill crowd would rise with excitement when they saw McDonald moving on the ball.

During a difficult era for the Club, Ian’s consistency of selection kept him as a mainstay in the side. Under a number of different managers, such as Bertie Auld, Peter Cormack, Benny Rooney, Derek Johnstone and Billy Lamont, he would play more often than he wouldn’t. Although those sides would not achieve tangible success, Ian’s contribution was no less important as Thistle tried to get back to the Premier Division once more.

The 1988/89 campaign saw Ian drop out of contention for the first time in a number of years. He would feature only a handful of times under John Lambie and in the summer of 1989, Ian left Firhill for good.

As a longstanding servant to the club, Ian will take his thoroughly deserved place in our Hall of Fame.

Taking place in the iconic Alan Rough Lounge, six more Thistle legends will be immortalised into our club Hall of Fame.

Tickets for the Hall of Fame dinner are now sold out.