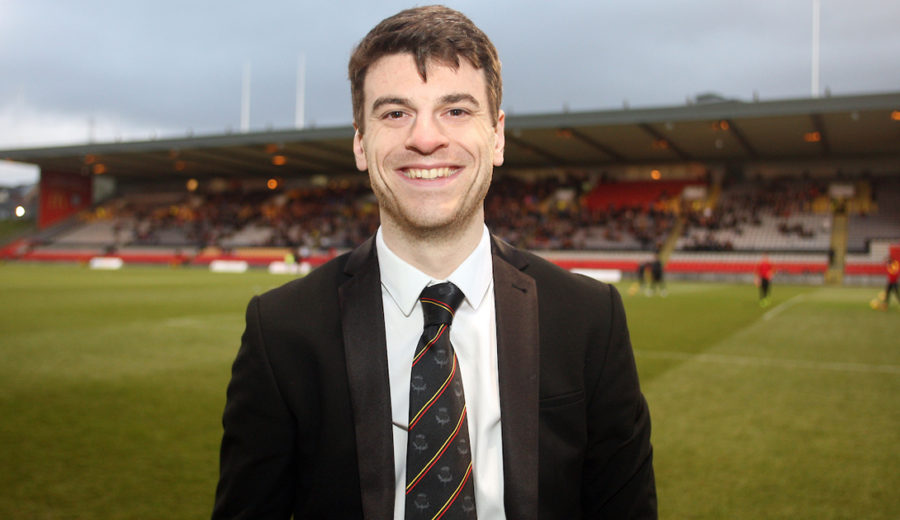 Anyone who has been to the Energy Check Stadium at Firhill in recent weeks may have noticed a slight change in the dulcet tones of the club’s stadium announcer. With former PA, Gavin Wallace leaving for pastures new in the form of Rugby Park just before Christmas, the hunt was on to find a worthy replacement. The club received dozens of applications and the standard was extremely high but, when all was said and done the clear candidate was Callum Bell who took charge of his first completely solo game on Saturday.

Callum, who produces Clyde 1’s breakfast show, joins the Jags matchday team with a wealth of broadcast production experience and had already taken to the mic for a couple of home games to build experience ahead of his first solo outing.

So, as Callum made the step up to take control of his first full match we wanted to ask him a few questions so that you could get to know him a little bit better.

What made you want to be the announcer at the Energy Check Stadium at Firhill?

I’d been looking to get into stadium and event work for a while as I think it’s a really exciting thing to be involved with. I’m a big football fan so when I saw the job at Thistle I knew it was a great opportunity and obviously I couldn’t pass up the chance to work with the best team in Glasgow so it was a no brainer really.

The team has been great since I first got involved but that’s what I expected as I had already heard good things about the club from the Clyde 1 sports reporters. It has been a great start and I hope it continues.

How long have you worked in radio and how did you first get your break?

I’ve been in radio for about five years now. I went to City of Glasgow College for a few years to learn the trade and then worked my way up from working with the smaller local stations to producing Clyde 1’s Breakfast show.

My first big break was a bit of luck if I’m honest, someone else turned down a job at Clyde 1 and it would seem that I was their last resort! I’d like to take this opportunity to thank that kind stranger for giving me the opportunity!

Is this the start of a bid to overthrow Bowie and make the Clyde 1 breakfast slot your own?

Absolutely 100% yes! ‘Bell at Breakfast’ sounds better anyway. Once I’ve got that I’ll move onto making it the ‘CBX’.

What has been the highlight of your time with Thistle so far?

It sounds cheesy but every single person I’ve met – staff and fans – have been incredibly helpful and encouraging. I’ve been so impressed with how the club is run on matchdays and I can’t wait to get more involved. That and getting to present Conor Sammon with his McCrea Financial Services Player of the Month Award. #FEEDTHEFISH Hopefully the fish can continue to be fed for the rest of the season!

If you want Callum to make a half-time announcement at a match at The Energy Check Stadium at Firhill then please email   at least 48 hours before the fixture.

As a Club, we will do our best to broadcast any requests over the stadium P.A. system at half time on match days. However, due to time restraints and an overwhelming demand, this may at times not be possible.