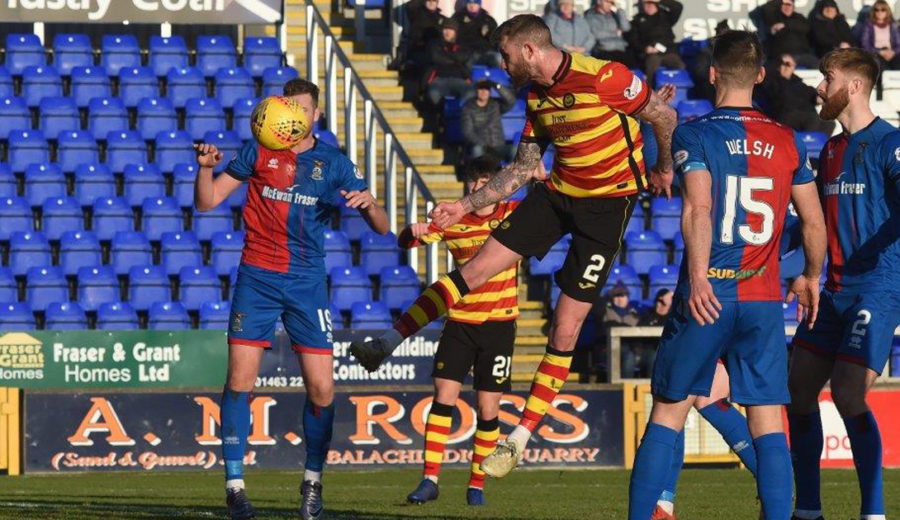 Over the past few weeks, there have been a number of standout performers in the red and yellow of Partick Thistle but few have worked quite as hard as right back, Christie Elliott. The ex-Jarrow man covered more ground than any of his teammates in the weekend’s 2-1 victory over Inverness, playing a key role as part of Gary Caldwell’s team.

The Jags moved to within one point of eighth placed Alloa with three points in the Highlands and Elliott spoke to ptfc.co.uk following the game’s conclusion:

“It’s a massive result and we thoroughly deserved it overall. In the first half the lads were brilliant and in the second half we did enough even though we could have been better. Ultimately, it was all about getting the win and the points which is exactly what we did.”

Thistle were without a league victory on the road this season before their trip to the Highlands on Saturday, and Christie was glad to put that record to bed against Caley.

“It’s nice to be able to put that behind us now. We knew it was going to be tough up here, it always is, but we’d prepared well through the week and did what we needed to do on the pitch.

“Trips to Inverness and County are a bit different to other away games because we stay overnight so we all got some time together last night which was good for bonding with all the new guys. The spirits are really high in the squad at the moment and I think that translates onto the pitch.”

Continuing to discuss the Club’s January signings, Christie complimented the performances of his fellow defenders, Steven Anderson, Steven Saunders and Jack McMillan, who operated as a back three for the majority of the game at the Tulloch Caledonian Stadium.

“They’ve been brilliant since joining. They all bring something to the team and you could see today that Inverness rarely caused us any problems and that’s testament to the guys at the back.

“The one thing we’re disappointed with as a team is that we didn’t get that clean sheet. As I’ve said, Inverness didn’t trouble us much and, in the end, I think we probably made it nervier than it should have been on the balance of chances.”

Having started with a five-at-the-back, the visitors switched to a four in the closing stages as they saw out the win and Elliott believes that adaptability is a key asset when looking to defend leads.

“It comes with having different players who can play in different roles. Having those options means we can react to what’s happening in games and that’s an important asset. Today we had to change because Steven Anderson needed to go off but it didn’t throw us at all. Maybe a couple of months ago we might have drawn that game but we’re in a better place to see out matches now.”

The Maryhill men face a trip to East Fife next week in the Scottish Cup and, although Christie is aware of the Fifers’ threat, he hopes the team carry their current confidence into the tie.

“In the last few games there have been plenty of positives to take. We feel like we’ve been improving with each match and now we’ve put a run of results together. It’s back to the cup now though and we know we’ll have to be on top form again to get through.

“East Fife got the better of us earlier this season and we’re keen to get one back on them. On top of that, it’s a chance to get to a quarter-final which is always exciting for both the players and the fans.”

A more in depth video interview with Gary Caldwell is available now to Jagzone subscribers and will be followed by reaction from Stuart Bannigan and Jack McMillan – log in now to see them.