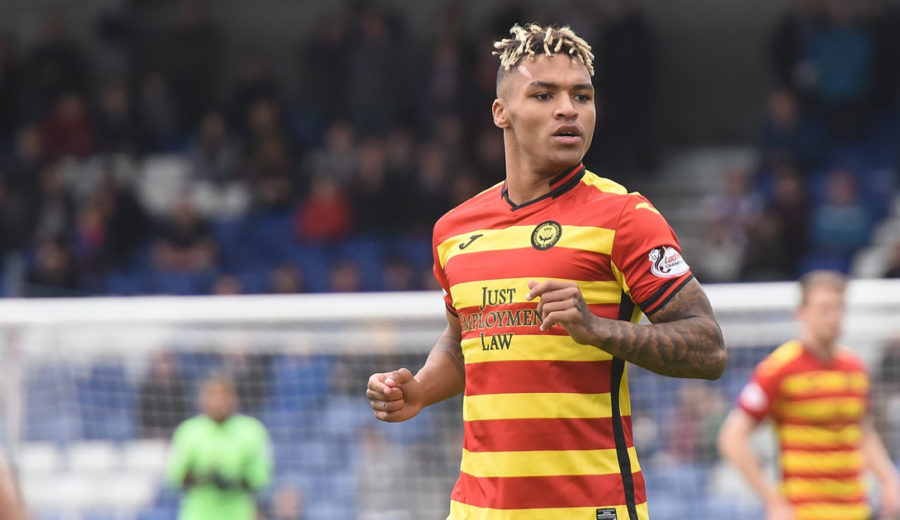 Jai Quitongo: I’m grateful for the chance to play here at Thistle

Despite the disappointing 3-2 defeat to Inverness, one positive for Partick Thistle was the debut of Jai Quitongo who made his first senior appearance since January, looking lively in a 20-minute cameo. The 21-year old penned a four-month deal in Maryhill on deadline day and finally made his inaugural appearance as a Jag on Saturday afternoon, replacing Miles Storey in the 70th minute. It wasn’t until Jai was introduced that the goals went in for Thistle as they came close to securing an unlikely point with a spirited comeback after a sub-par first half display. Jai spoke to ptfc.co.uk after the game.

We began by discussing the game with Jai as we reflected on an ultimately disappointing 90 minutes.

“I thought we started well but when that first goal goes in the game changed. It gave them a boost which they carried forward and used to get the second and third. I think when Stuart Bannigan came on the game changed because he’s that driving force. He’s absolutely fearless and has something to prove which meant he was able to really dominate that midfield. After he came on, I thought we were the better side and we had them up against the ropes towards the end but we’d just given ourselves too much to do with the first half performance.”

Although the result was a poor one for Thistle, Jai felt that in terms of attacking, the team did well and could have easily had another goal or two.

“Going forward, we had some good chances. Obviously, we missed a penalty but even from open play, we had two or three real chances to score in the second half on top of the two goals we got. I think having Banzo on the park helped that because he’s such a good passer of the ball but Kris Doolan made a big difference as well. We threatened their goal enough and scoring two past this Inverness team is not easy, so in that respect, we shouldn’t be too disheartened.”

He then moved on to tell us how delighted he was to get out on the pitch and make his debut in the red and yellow of Partick Thistle.

“It was my 21st birthday yesterday and it was good to be able to spend it with the boys staying overnight here, getting involved with the squad. On top of that, the gaffer’s trusted me to go out and play 20 minutes which I’m so thankful for because I just want to get out there, prove that I’m not injury prone and that I can hit my full potential.”

Having made his debut we then quickly discussed what Quitongo’s goals are for the 2018/19 campaign.

“For me it’s just about working hard, getting as much game-time as possible and then going from there. I want to repay the manager for giving me this opportunity by giving 100 percent every time I play because it’s been a tough time for me this year. I’ve been itching to play again and I’m grateful for the chance to play here at Thistle.”

We then returned to the here and now with Jai talking about next week’s league fixture at home to Queen of the South which Quitongo says will be a very tough test for everyone in the team.

“Each game in the Championship is difficult in a different way and coming up against this Queen of the South team will not be easy. We know what we’ll be getting with Queens and it’s up to us to be prepared for what they’ll throw at us. I know some of their boys from Morton like Michael Doyle and Gary Harkins who are both great players at this level. On top of that they’ve got Stephen Dobbie who’s been on fire this season so we know how difficult it’ll be and we’ll need to improve on today’s performance if we’re to get anything from that game because they’ll be just as clinical as Inverness, if not more.”

More reaction from Kris Doolan and Blair Spittal as well as Jags gaffer Alan Archibald is available now to Jagzone subscribers. Log in now to see it.

Jagzone subscribers can rewatch the full game or enjoy extended highlights of our fifth Championship fixture this season.