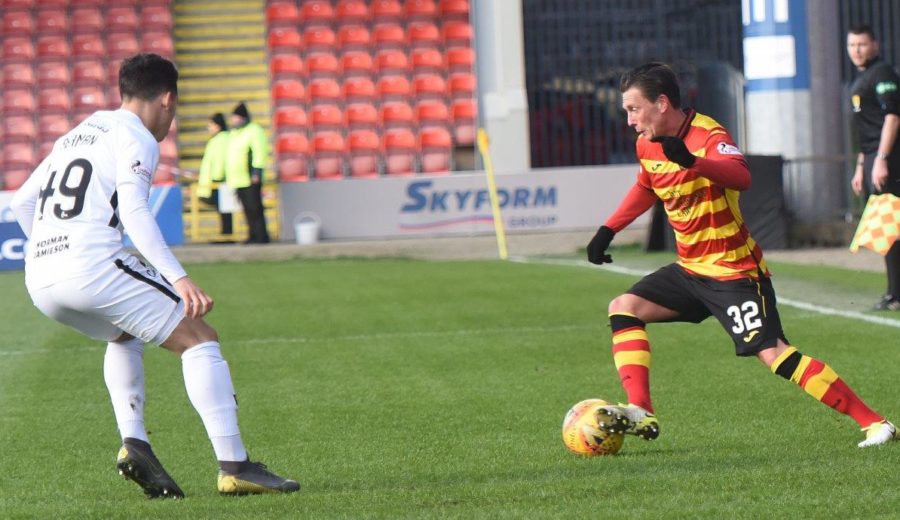 Joe Cardle happy with contribution on full return from injury

One of two players making their full returns from injury yesterday against Dundee United, Joe Cardle made an immediate impact for Partick Thistle as he rejoined Gary Caldwell’s starting line-up.

The number 32 set up the home side’s opening goal as his right-footed delivery found Scott McDonald, allowing the Australian to head home from close range.

Joe was taken off for Aidan Fitzpatrick just ahead of the hour mark but the ex-Dunfermline man must have passed the creative spark onto the youngster as Fitzpatrick went on to score a dramatic late winner for the Maryhill men after Nicky Clark had levelled things with 15 minutes to play.

Joe said: “Everyone is ecstatic after that. It was one where the momentum kept swinging from one side to the other and we’re so pleased that we’ve come out with the three points. When I came off it felt like we were comfortable and, if anything, could have been ahead by more but their goal changes everything and very quickly they could have easily been ahead.

“Despite that, we knew we still had good players on the pitch and we knew there might still be a couple of chances for us. Thankfully, when the second one came for Fitzy, he made sure it went in.”

The Energy Check Stadium at Firhill burst into celebration as Thistle’s number 21 scored with the final whistle looming and Joe said that moments like that one are what football is all about.

“Even though I was on the bench at that point, we were all giving it laldy. I managed to burst my lip in the celebrations thanks to a flying elbow but that’s all part of the emotion of a last-minute winner. You could see that there weren’t many people leaving early because I think everyone could sense that there was still a goal to come and we’re glad we were able to get it.”

On a personal note, Cardle was delighted to be back in the first XI and to be able to set up the deadlock breaking goal for Scott McDonald.

“It was great to be in from the start. I really enjoyed getting 20 minutes or so against Hearts and to follow that up with another 60 odd minutes is great for me. Being able to contribute with an assist is excellent too of course and I’m just happy to be playing again.”

The Jags now have a very tough week with a cup quarter-final replay against Hearts on Tuesday before they face Falkirk away in the league but Joe is hoping that the team can take confidence from the win into those fixtures.

“Every game is going to be massive for us between now and the end of the season and we have two big ones this week for very different reasons. The boys are in great spirits and this win will only serve to further that. Hopefully we can carry that into these upcoming matches.”