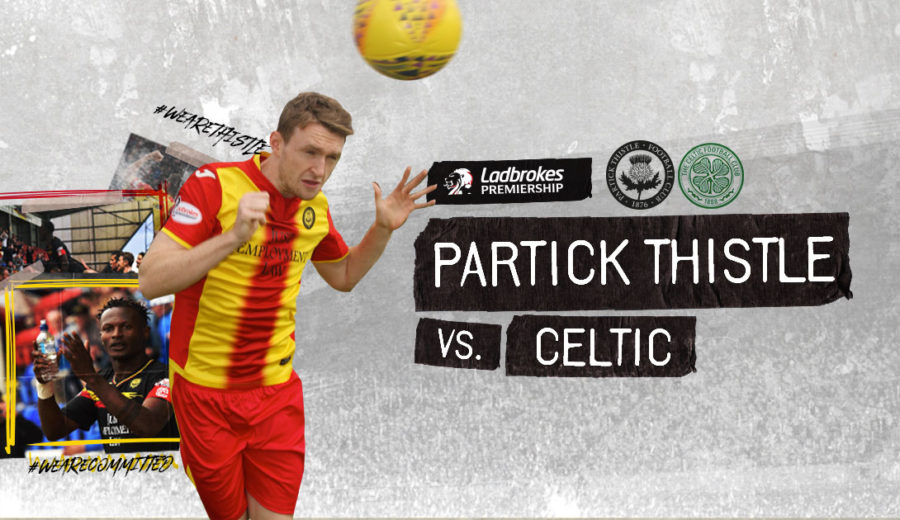 Niall Keown is looking forward to the test of Celtic, as last seasons unbeaten champions visit Firhill for Thistle’s first home league game of the season.

It’s Friday night football at Firhill and Niall is looking forward to the challenge.

Speaking to ptfc.co.uk he said: “We are looking forward to the challenge. We are coming off the back of a good 3-0 away win on Tuesday which is great for everyone’s confidence.

“I thought we performed very well In Perth, especially in the second half and everyone played a massive part. Kevin Nisbet came in for Kris Doolan and played extremely well and gave us a good focal point up top. St Johnstone isn’t an easy place to go so there is a lot of positives to take from that.”

The defender had to come off the bench midway through the first half after injury to Daniel Devine, and teamed up with new recruit Jordan Turnbull to help the defence to a clean sheet. Now Keown is hoping for more of the same on Friday night

“We managed to keep a clean sheet which was fantastic as a defence. That’s what we are there to do and I thought we done it very well. Jordan Turnbull made his debut and done really well and obviously I had to come in when unfortunately Danny picked up a knock.

“Competition for places is always good, it keeps everyone on their toes and fighting for their place. It also gives us a lot of flexibility if we need to switch formations or to cover for things like injuries. We are all forming new partnerships with Jordan coming in but we will do that as quickly as possible.”

The Thistle number five was part of the team which recorded a 1-1 draw at Celtic Park last season and he is hoping to take that into tonight’s game, however he is aware how hard it will be.

“Celtic give us a massive challenge and they are on such a good run of form and scoring a lot of goals so as a defence we have to make sure we perform and keep things right.

“We were disappointed with our performances against the top six teams last season, especially after the split so we want to make sure we do better this season and try and take some more points from those games.”

Niall picked up a knock before the season began however admits he’s now feeling great and getting better as the training sessions go by.

“I didn’t have pre-season which wasn’t ideal but I’m back feeling great and having to get fit as quick as I can. These games are a massive test for your fitness but I’m feeling fantastic and delighted to be back in with the boys.”

The match will be live on BT Sport and Keown is looking forward to playing under the floodlights in front of a noIsy Thistle support.

“Friday night games are great, under the floodlights at Firhill. We know our fans will give us a great backing which will be fantastic and really help us. We know it’s going to be on TV so we want to put in a good performance and show what we can do.”

An exclusive preview interview with Callum Booth as well as Jags gaffer, Alan Archibald are now available to Jagzone subscribers – log in now to see them.

Niall has committed, will you join him? 2017/18 season tickets are still on sale.