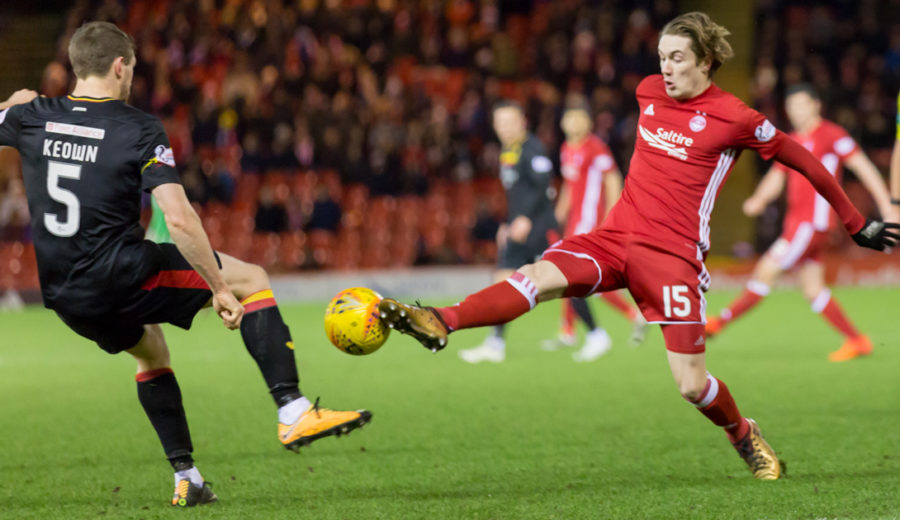 Keown unhappy not to take anything from Aberdeen match

Last night, Partick Thistle travelled North, to Pittodrie, to take on Aberdeen as they looked to build on the weekend’s 1-0 success against Hamilton. Unfortunately for the visitors, they were edged out by a goal to nil despite another resilient showing as Adam Rooney’s second half strike gave the Dons a narrow victory.

The Jags backline continued its recent improvement with another solid display. Alan Archibald’s defence have now conceded just three goals in as many games which is vastly better than the 11 they conceded in December’s opening four fixtures. One of the key men in this reorganisation has been Thistle number five Niall Keown and the Englishman spoke to ptfc.co.uk following the match.

Niall started by detailing his disappointment as the side failed to take any points from the night’s fixture, leaving them bottom of the Ladbrokes Premiership table with just a single game to go until the league breaks up for a winter hiatus.

“It’s obviously disheartening to put so much into a game but get nothing from it. We defended well for the majority of the game and our shape looked good for the third game in a row. We’ve worked very hard to improve our defending and it’s beginning to show on the pitch. I think the heavy losses we took brought the team closer together overall and everyone has come together to try to fix our problems. You can definitely see improvement but we’re unhappy that we weren’t able to get anything from the match because it’s all about points now.”

Last night, Alan Archibald welcomed Jordan Turnbull back into the side following a suspension and switched from a five-at-the-back to a flat four. We spoke to Niall about how these sort of personnel and formation changes affect the defence.

“It’s our job to adapt to these alterations. We could use it as an excuse but that would be dishonest. We work on different shapes and line-ups in training and we have to be ready for changes. It’s important that when we do make changes that we talk to each other and try our best to keep each other right while also focusing on ourselves.”

The ex-Reading man then looked ahead to the weekend’s fixture as the Jags take on fellow strugglers Ross County at home in a crunch match that represents Thistle’s last of the year.

“It’s a huge game of course but they all are when you’re at the bottom of the table. There is that extra edge because both teams are on the same number of points but we have to make sure we don’t get distracted by the story. We have to be in the right frame of mind and concentrate on our game. If we can get to the break off the bottom then that would be massive as the squad will be considerably better at the end of the break and we will hopefully be able to push on and climb the table.”

As Niall mentioned, it’s Ross County next up for Thistle as they now prepare to face the Staggies on Saturday at the Energy Check Stadium at Firhill. Kick-off is at 15:00 in Maryhill.

A more in depth video interview with Alan Archibald is available now to Jagzone subscribers and will be followed by reaction from Conor Sammon. Log in now to see it as soon as it is available.