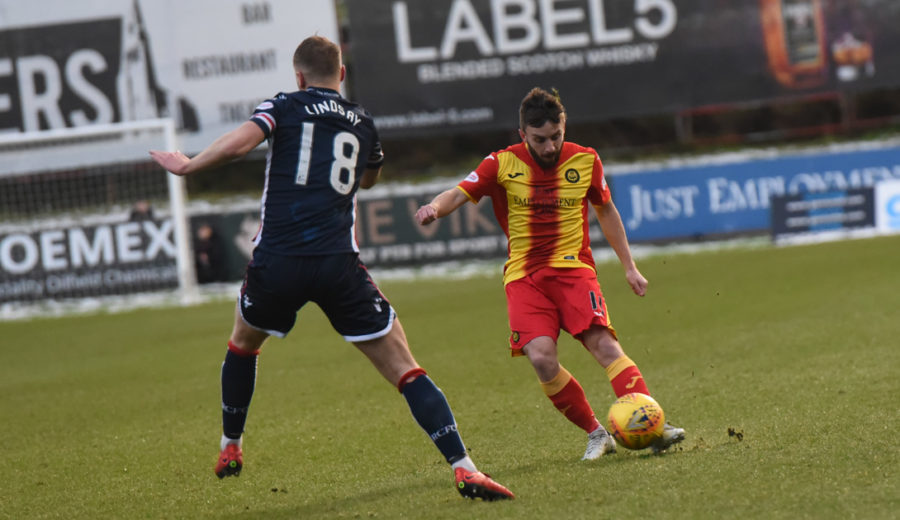 Lawless delighted to end 2017 with a win

Thistle left back Stevie Lawless was delighted to close out 2017 with a 2-0 home victory over Ross County that lifts the Jags off the foot of the table going into the new year.

Lawless helped the defence to another clean sheet, allowing Kris Doolan and Conor Sammon to do the business at the other end to give Thistle all three points.

Stevie was happy with the win as he spoke to ptfc.co.uk

“It’s great to get the win and be able to bring the New Year in with a victory. Hopefully it means the fans can all have a good end to the year and a happy start to 2018.

“It might not have looked pretty at times but we got the win and the three points. I think we deserved it too. It was two good finishes from the boys up top that gave us the win.

“Sometimes when you are at the bottom the nerves are there but we kept it tight and gave ourselves a solid footing to build on and get the three points.”

The win is the fifth from six games at The Energy Check Stadium at Firhill and Lawless hopes after the split the team can fix the away form.

“Our home form has been great in the last six games, we are making teams not want to come and play us here which is good but we have to tie that up with form away from home too.

“We didn’t have the best of starts so these home wins have given us something to build on going into the second half of the season. It’s given us a real platform.

“It’s another win against a team round about us which is important. It was an important game for both teams, we both wanted to win it but we have managed to and we were delighted to do so.”

Lawless picked up his fourth clean sheet at the left wing back role and it’s something normal left back, Callum Booth should be worrying about according to the Jags eleven.

“It’s a great record and it is funny how these things happen sometimes. I won’t say it’s totally down to me but I think Callum Booth is getting a bit worried now!

“I’m just delighted to have played my part for the team, the wins are the important thing, a clean sheet is a nice bonus though. You keep a clean sheet and you don’t lose the game so gives us something to build on.”

With the winter break now in progress, the players will have a week off before jetting off to a warm weather training camp to prepare for a tough second half of the season.

“It was a busy December period, it’s how we like it as players but it is hard going on players, you don’t get much time to recover but we have the chance now to properly recharge the batteries and we’ll be raring to go.”

More reaction from Adam Barton and Kris Doolan as well as Jags gaffer Alan Archibald is available now to Jagzone subscribers. Log in now to see it.