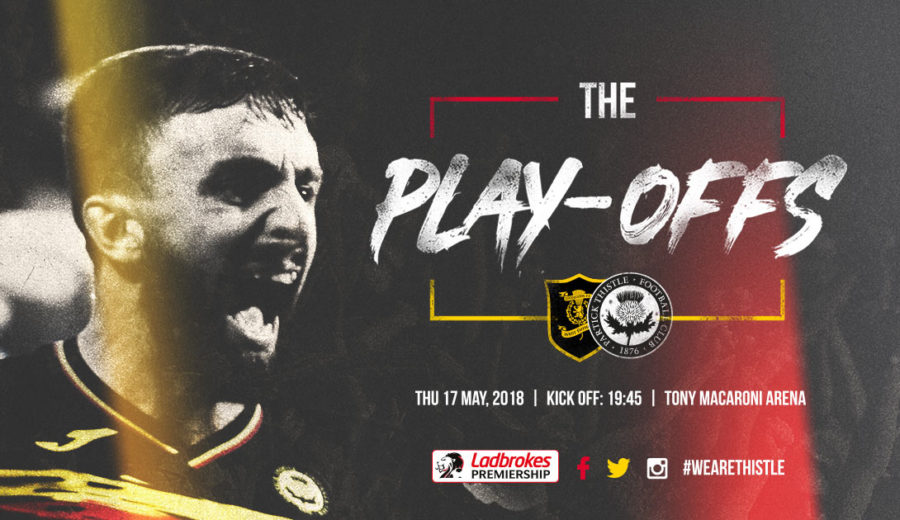 Lawless knows what is needed

Steven Lawless is hoping to use the victory over Dundee and the confidence built from an upturn in performance since the split to complete the job of keeping Thistle in the top flight.

The victory over Dundee sets Thistle up with a two legged play off against Livingston and Lawless knows what is needed.

Speaking to ptfc.co.uk he said: “We know it’s going to be a tough game but we are confident we can get the results we need to keep us in the division.

“We need to apply ourselves in the right manner, we need to make sure we go out and give it our all and if we do we think we can get what we need.”

Livingston have earned their place in the final by finishing second in the Ladbrokes Championship before dispatching Dundee United and Lawless is expecting a tough game.

“We under no illusions on how hard the game is going to be. We know what Livingston are all about. We know they are going to be hard working, but I feel as long as we match that we have enough quality to cause them problems.

“Everyone needs to play their part, we need performances from everyone all over the park if we are to do what we need to do.”

The winger know this isn’t the position anyone would have wanted to be in but after avoiding bottom on the last day it’s another chance at safety.

“At the start of the season we wouldn’t have been happy with this position but we knew on Saturday we had to get a result to give us this chance and we managed to do that. There was a lot of pressure on us and I thought we managed that well and got the result.

“Given the circumstances I thought we played some good football and put in a performance. That’s quite a big thing considering what was riding on the game and the amount of nerves involved.

“We can use that going into these games knowing we can play good football, under pressure.”

The form since the split has been better, two wins, two draws and a single defeat in the five games and the Thistle number eleven feels things have been much more positive.

“We treated the split as a mini league and put everything before that behind us. I thought we managed that well and put in some good performances. We only had that one defeat and we had a number of good performances at least for parts of the game.

“If it wasn’t for a couple of moments switching off we could have got another couple of points and kept us safe but we have a lot of positives from the games which we will take into the two games coming up.”

Lawless knows the pressure is all on Thistle and it’s about how we manage that pressure.

“We have to manage the pressure, we know it will be a tough game which we need to turn up to. We know Livingston come into the game with the pressure off but we look after ourselves and make sure we do our jobs.

“We played Livingston earlier in the season and they were tough but they’ve improved since then too. We’ve studied video of them and know what to look out for.”

Stevie was named JagZoneLIVE, sponsored by Fierce Digital Jag of the match on Saturday and wants to continue that form on Thursday.

“I thought I was back to more myself on Saturday and pleased with how I played, I was ok in the games before that but didn’t think I done enough, if I can continue how I played on Saturday I’ll be happy, that’s what I’m aiming for.”

Lawless has reiterated the words of others in asking for the fans continued backing after almost 1000 travelled to Dens Park on Saturday.

“The fans were fantastic at Dundee, they make a big difference for us. I know we keeps saying it but it makes such a difference.

“We need them now for these last two games to help make the difference, to help us stay in this league.”

Make one last trip to support the side this season at the Tony Macaroni Arena on Thursday night. This fixture is pay at the gate for Partick Thistle supporters who are advised to arrive early to ensure entry for kick off.

More exclusive preview interviews with Baily Cargill and Jags gaffer, Alan Archibald, are available to Jagzone subscribers –  log in now to see them.

Can’t make it to Dens Park? Jagzone members can listen to live audio commentary of the match. JagZoneLIVE begins at 2:30pm on Saturday.