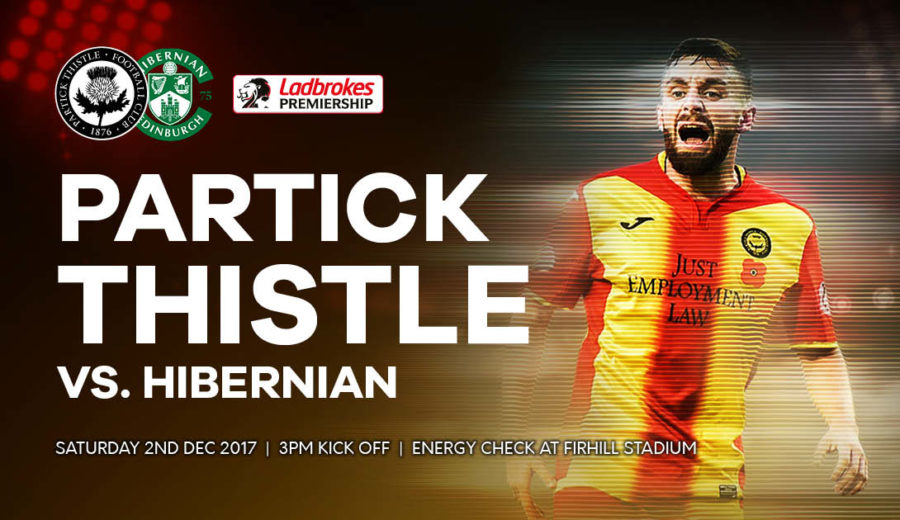 After a November with only 2 games, Thistle go into an eight game December raring to go and hoping to pick up some much needed points.

That starts tomorrow when Hibs visit the Energy Check Stadium at Firhill and Stevie Lawless is looking forward to getting out there.

Speaking to ptfc.co.uk he said: “It’s going to be a tough game but we are all looking forward to getting out on the pitch again. It’s been a long wait since our last game and we are all raring to go.”

Lawless admits it’s been a frustrating time with a lack of action but December it’s what it’s all about for a player.

“It’s frustrating when you don’t have games, it’s good from the point of view it lets you get over any niggles and get yourself fresh but when you are fit and ready you just want to be out there.

“When you had a game then when you are training all week you have something to aim for, something to look forward to at the end of the week. When you don’t have a game it feels like you aren’t training for anything sometimes but we have been putting everything into being ready for this game on Saturday and we are looking forward to it.”

Hibs took the three points on the opening day of the season but the midfielder is hoping Thistle can get their own back this time.

“We were disappointed with the result against Hibs earlier in the season, we started the game well and they got a lucky goal which gave them a big lift with the crowd behind them but we have our fans behind us this time and we want to go out and give them something to cheer about.”

In the last two home games Thistle have won both and picked up six points, Lawless is hoping to make Firhill a fortress

“It’s important to do well in your home games. We’ve won the last two and we want to keep that form up. You want to make other teams not look forward to coming to your home ground. You want them to fear facing us and if we continue winning games then they will do that.”

“I’ve been playing so I’ve been happy, I would rather be on the park than be on the bench or out injured. It’s not my ideal position, I think the manager knows that but if there’s a job to be done and the gaffer thinks I can do it then I’ll give it everything for the team

“The team is the important thing and we’ve managed to go on a wee run while I’ve been playing there, not saying that’s because of me but I can’t have done too badly if I was asked to do it again!

“It might have been mainly due to having no one else but it gives you confidence that the manager trusts me to play there and do a job for the team. I much prefer playing further forward and I don’t think I’ll be back there when the injured players return but I’ll give everything if I’m required to play anywhere.“

More exclusive preview interviews with Chris Erskine, Niall Keown and Jags gaffer, Alan Archibald are now available to Jagzone subscribers – log in now to see them. Jagzone members will also be able to watch highlights of the game from midnight.