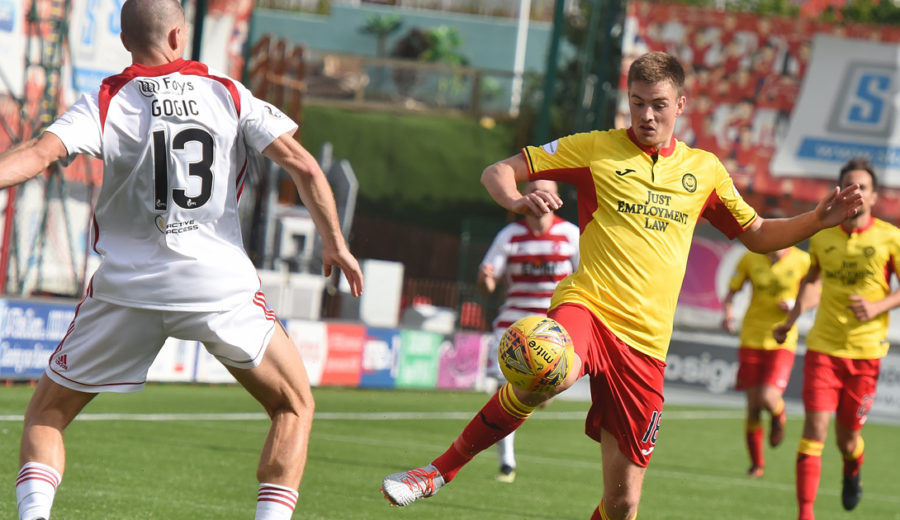 Lewis Mansell came off the bench to help Thistle get an important Betfred Cup point against Hamilton.

After going ahead, Hamilton responded with two goals but, in the 72nd minute, Mansell put the ball on a plate for Shea Gordon to draw Thistle level.

Despite getting a point against the Ladbrokes Premiership team that guarantees a win against CLyde will see Thistle top the group, Lewis admits there was disappointment in the dressing room that it wasn’t all three that the Jags left with.

“We are a bit disappointed not to win the game to be honest but it was pleasing to have taken an important point against a team in the league above.

“We aren’t happy in how we lost the second goal but thought we showed good spirit in fighting back and getting the equaliser. We looked dangerous towards the end of the game and we looked like the team that was going to go on and win it.”

The Thistle number 18 feels there were a lot of positives to take from the performance including the way in which the team finished.

“I thought we worked really hard, I think you could see, especially towards the end of the game, that we are going to be a very fit team and one that will work for the entire 90 minutes. We had chances towards the end and we caused them problems which was encouraging.

The striker came off the bench in the second half and he was happy with his performance. Mansell also feels the competition for places is good for the team.

“I was obviously disappointed to start the game but when I do get the opportunity then I just have to show what I can do and I thought I managed to do well. I got the assist for the equaliser and I’m happy with how I played.

After the draw in South Lanarkshire, Thistle know a win on Wednesday at home against Clyde will see progression secured and Lewis is hoping to go out and do just that.

“We know a win on Wednesday and we are through to the next round. We were disappointed not to win today but we know it still keeps us in a strong position to qualify and we’ll work hard now before Wednesday.

“None of the games so far have been easy and it’ll be another tough game at the Energy Check Stadium at Firhill on Wednesday. They will give us a battle but there is no reason we can’t go out and get the three points. We want do it with a good performance too and give ourselves the perfect platform going into the league campaign.”

All in all it was an eventful day for the Mansell family as, while Lewis was providing the assist for the equaliser his dad, Dave, was part of the team who provided emergency medical treatment to a Thistle fan who fell ill in the away end. The supporter is now recovering in hospital.

After the match Dave tweeted:

“I’d just like to say that mine was only part of a team effort. Special praise should also go to the Thistle fans first on scene, Hamilton first aiders and the stewards whose prompt actions included CPR and getting a defibrillator to the patient very quickly. A special thank you to the A&E consultant who was also on scene.

“And finally, never be afraid to step forward to carry out CPR, even just doing chest compressions can save a life. Remember, when their heart has stopped you are never going to make them worse by trying CPR…and you just might save a life.”