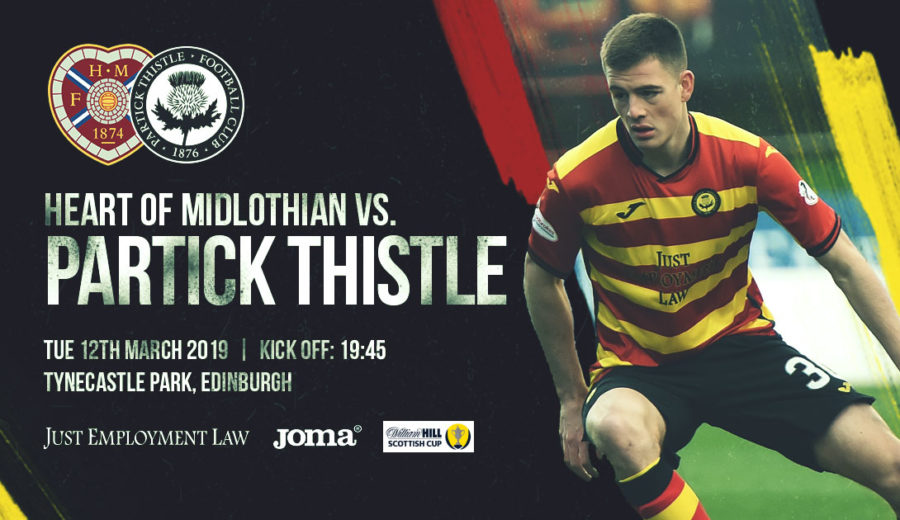 It may have been Aidan Fitzpatrick’s late winner that sent Thistle fans crazy on Saturday but it was Lewis Mansell who set the 17 year old up. Only 21 himself Lewis, on loan from Blackburn Rovers, has started to make an impact in recent weeks and impressed in the first tie against Hearts last week.

Full of confidence and keen to impress, Lewis sat down exclusively with ptfc.co.uk to discuss two good performances and the chance of making a semi final.

“It’s been a good week. I think after the performance against Hearts it really set us up for Dundee United. All the lads put in a great shift against Hearts and we were unlucky not to come away with the win. For the game against United I came on and just tried to inject a bit more energy in to the team and thankfully Fitzy put it in the back of the net.”

Mansell put in a hard shift against Hearts to earn the replay and, despite a physical encounter that at times saw him isolated he was delighted to play his part in earning the replay.

“Yeah at times it’s a bit isolated. But all I could do really was work the two centre halves the best that I could, and that’s what I tried. Putting as much pressure as I could on both centre halves, putting them in difficult positions, rushing passes, and things like that. Hopefully I’ll get a bit more of the ball tomorrow but I’ll happily put in the same shift again if it gets us into the next round.”

Fitzpatrick was no doubt a relieved man in the dressing room after the game on Saturday as, despite ultimately netting the winner, he had a wonderful chance to square the ball to Mansell just minutes earlier and chose to shoot himself. His effort was saved and Lewis is honest enough to admit he was not the happiest man in Maryhill at that point.

“I was frustrated he didn’t pick the pass out. I can kind of understand why, he is a forward player himself and he is heading towards goal and saw the opportunity to put us 2-1 up. However, I think if he picks his head up a bit sooner I could have been the one to put it in the back of the net that time. He made amends though and we were all buzzing when it hit the net. To be fair, if I was in the form he is I probably would have shot as well!

“I think it was just relief really for the whole team to get the win. It’s been a long time since we scored a last minute winner and as soon as I did break through the first thing that I did see was Fitzy in a lot of space on his own. It was a no brainer for me really, he was in a much better position, so floated the pass in, and thankfully he put it in the back of the net, and the team came away with three points.”

Having joined the Club in January Lewis took some time to get his chance but the young Englishman’s only aim is to play games and score goals.

“I have really enjoyed it since coming through in January. I wouldn’t say it was frustrating for me as it was good that the team were back to winning and getting good results. I was just waiting on my opportunity and when I did come on for 10 to 15 minutes I was determined to make an impact. I think that with me doing that, it has put me in the gaffer’s thoughts that if things aren’t going to plan he can trust me and knows that I can provide chances and hopefully goals.

“The gaffer has been a very good man manager and he’s helped me regain my confidence. He’s out working with me at training every day and it’s really good atmosphere in training. So I am thankful for him to give me this chance, and hopefully I can repay him by providing goals and assists.”

Even as a new addition to the Jags squad Lewis knows exactly how much it would mean for the Club to make a semi final.

“It’s a great opportunity and it’s an opportunity we can’t pass up. I think we have to be determined that the only result we come away with is a win. There is no reason why we can’t come away with a win with the way we played against Hearts last time, especially in the second half. I thought we were the far better side and looked like we were the only team going to go on and win.

“I think going in to the game tonight, if we can ride out the first 20 minutes or so, it will put us in great stead for the rest of the game. If we can possibly grab an early goal our confidence will only grow and grow, and hopefully we will go on to be in the semi-finals.”

More exclusive preview interviews with Conor Hazard and Jags manager, Gary Caldwell, are available to Jagzone subscribers – log in now to see them.

Jagzone members will also be able to watch highlights of the game.

Can’t make it to Tynecastle? Jagzone members can listen to live audio commentary of the match. JagZoneLIVE begins at 7:30pm on Tuesday night.